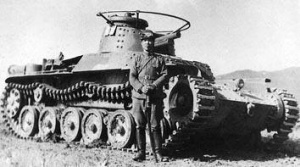 The Chi-Ha's low silhouette and semicircular radio antenna on the turret made the tank very recognizable from its contemporaries. Because of the Navy having resource priority, the Army had to keep this rather outdated tank in service, which got a turret overhaul in 1942, allowing for a third turret crew member and a 47 mm Type 1 anti-tank gun. This remodel got the designation Type 97-Kai (Improved) or Type 97 ShinHoTo (Improved turret) Chi-Ha.

The Type 97 Chi-Ha was a medium tank constructed with rivets in the armour plates. It had a crew of four with a two-man turret. Armour was relatively thin but quite standard for the 1930s. The first main gun on the Chi-Ha, being the 57 mm Type 97 tank gun which had a slighter longer barrel than the 57 mm Type 90 tank gun that was mounted on the Type 89 I-Go medium tank and used in an infantry support role. The bell crank suspension was the same as on the Type 95 Ha-Go light tank, but due to the Chi-Ha having a longer hull, the suspension also had to be elongated and got 6 road wheels instead of four. These 2 new road wheels made the Chi-Ha more stable in a hilly environment which was an issue on the Type 95 Ha-Go. 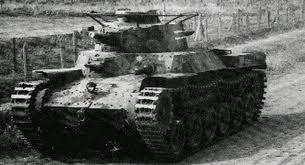 As the Type 89 I-Go saw use in Manchuria and the problem of not keeping up with the motorized infantry emerged, a replacement program by the Imperial Japanese Army was started in the late 1930s. The plan for the new tank was to be an up-scaled version of the 4-man Type 95 Ha-Go light tank, with thicker armour and a more powerful engine to keep up with motorization.

The Tokyo Plant of Mitsubishi Heavy Industries and Osaka Army Arsenal started their prototypes for the Army requirements, with Mitsubishi developing the more expensive Chi-Ha and Osaka the cheaper, lighter Chi-Ni.

Even though the requirement of the gun was to be 47 mm, both Mitsubishi and Osaka Army Arsenal outfitted their tanks with the 57 mm found on the Type 89B I-Go Otsu.

As the Second Sino-Japanese War broke out on the 7th of July 1937, the peace-time budget limits were removed. Because the Army now had a larger budget, they chose the more expensive and capable Chi-Ha by Mitsubishi and adopted it into service as the Type 97 Medium Tank Chi-Ha

As the Soviet–Japanese border disputes continued, the Chi-Ha has been put in service on the borders. Their first major encounter against other tanks was during the Battles of Khalkhin Gol. The low-velocity 57 mm Type 97 gun on the Type 97 started showing its weakness as the faster and better gunned Soviet BT-5 and BT-7 out-ranged and out-manoeuvred the slow turning and short-range turret of the Chi-Ha. Due to this shortcoming, the battles ended with heavy Japanese losses.

After hearing of these losses, the Army was looking for a more powerful gun. The development of a new 47 mm anti-tank gun began in 1939 and was completed by 1941. This new gun specifically designed to counter Soviet tanks was adopted as the 47 mm Type 1 anti-tank. The longer barrel of this 47 mm creating a lot higher muzzle velocity and resulted in greater armour penetration which far surpassed that of the 57 mm gun.

As this gun was to be put on the Chi-Ha, a new turret was designed, which allowed for the Type 1 47 mm tank gun to be mounted and a 5th crew member as a loader. This variant of the Chi-Ha would be designated as Type 97-Kai ("improved") or ShinHoTo Chi-Ha ("New turret" Chi-Ha"). The new Type 97 Medium Tank Chi-Ha Kai would fully replace the regular Type 97 Medium Tank Chi-Ha in 1942. Additionally, about 300 regular Chi-Ha's were converted with this new turret. 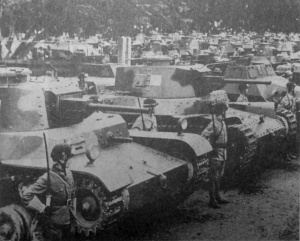 Like most other countries with a main medium tank, the Japanese adapted the hull for many roles and variants for other purposes. The Type 97 was improved plenty of times with field guns, command variants and engineering variants. Nearly a hundred self-propelled guns were built upon the Type 97 chassis.

As the firepower of 1930s Japanese tanks was rather lacklustre, and they couldn't reliably penetrate the 1940s generation of Soviet, American and British armour, the need for tank destroyers rose, and guns ranging from 47 mm up to 127 mm were tested. But due to the Navy's priority, raw materials for the Army's production was limited, and building new guns or tanks was nearly out of the question.

The last Japanese tank directly based on the Type 97 lineage was the Type 3 Medium Tank Chi-Nu which got the improved Chi-Ha hull from the Type 1 Medium Tank Chi-He but with a totally overhauled hexagonal turret and commander's cupola with a 75 mm gun.

As the first production of Chi-Ha's were completed, they were all moved to the Chinese front to support the infantry and deal with the weaker tank force of Chinese imported Vickers, Panzer I's and CV33's. Under the command of Hideki Tojo, who ignored the lessons they got out of previous tank usage under the Japanese army in 1933 (Battle of Rehe) and spread out the tanks in a more infantry focused attack, which made battles where the Chinese had actual anti-tank guns a very tough battle for the Japanese with spread out, lightly armoured tanks. Due to this failure of tactic, the funds for tank production were cut down, and tank brigades essentially shut down.

The first real combat test of the Chi-Ha happened during the Battles of Khalkhin Gol, Nomonhan, where the more successful combined arms force of the Soviets showed the weakness of Japanese infantry tanks as the Chi-Ha with short 57 mm was out-ranged and -gunned by the Soviet BT-5's and BT-7's.

From this incident and successes of the Blitzkrieg tactic of the Germans in Europe, the Japanese started re-evaluating tank tactics and developments (see Development: Chi-Ha Kai), though this came a little too late, as the Navy got resource priority due to the Chinese front coming to a stalemate, the expansion in South Asia and beginning of World War II for Japan as the Navy bombs Pearl Harbour. 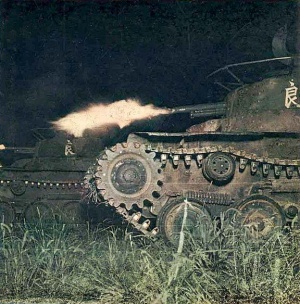 As the war shifted towards a more island-hopping campaign, the Army successfully used the Type 97 Chi-Ha's during the Battle of Singapore and Malaya. Due to the lightweight of the Japanese tanks, they could easily exploit the wet and thick jungles and attack the British from areas where they never expected to see any tanks coming from and effectively never placed defensive lines. The same tactics and movements of the Chi-Ha's were used during their campaign in Burma.

The first use of the Chi-Ha Kai was during the Battle of Corregidor. The new 47 mm made to have a more general tank role truly shined here and easily dealt with the armour of the American M3 Stuart light tanks.

But as the war progressed, the dated Chi-Ha started to fall behind. Still, in a position of not being able to create better tanks with the production priority of the Navy, the Japanese capable tanks of the '30s started facing the American 40's tank, the M4 Sherman, and due to production limitations the Chi-Ha and other Japanese tanks were viewed upon as bad designs and incompetent tanks. As they misinterpret these outdated tanks as Japan's 40's tanks. 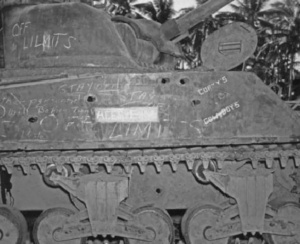 With the M4 Shermans being a big problem for Japanese tanks, the most front-line capable tank of taking them out, being the Chi-Ha Kai, was still only able to penetrate from either against the sides and rear.

The largest Japanese tank attack in the Pacific happened during the Battle of Saipan, where Type 97's and Type 95's from both a tank and infantry regiment charged an all-out counter-attack on the night of 16-17 June. As the Americans had landed the day before, they were fully prepared for a counter charge and knocked out about 44 tanks with the use of M4A2s, several M3 GMC, M1 Bazookas and 37 mm anti-tank guns. As this attack was futile, it led to many Japanese losses.

From this moment on, all hope was lost for the outdated tanks, which still had to see combat through, and most tanks would be used in a defensive position, being emplaced in hull defilades or even buried up to their turrets.