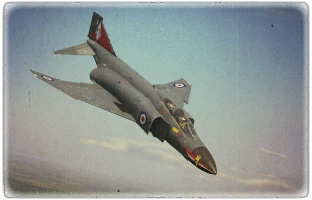 The Phantom FG. Mk1 is a rank VI British jet fighter with a battle rating of 10.3 (AB/RB/SB). It was introduced in Update "Starfighters".

The Phantom FG. Mk1 can be outfitted with the following ordnance: 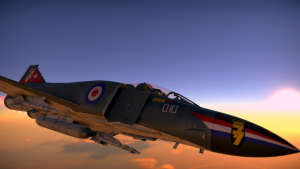 The Phantom FG.1 is the ultimate energy fighter- its advantages over other aircraft are sheer power, roll rate, its unrivalled ability to climb to high altitudes, and its nearly unparalleled speed and thrust-to-weight ratio down low. The twin Rolls-Royce Spey 203 engines produce just over 9,000 kgf thrust when you are stationary- that is to say, on the runway- and over 10,000 kgf when you're travelling at near-supersonic speeds.

Flares should be one of your top priorities, as well as the 1000 LB GP upgrade. These give you a fighting chance against your missile-armed opponents, and the bombs provide a relatively reliable source of RP

as you work towards better equipping the aircraft for dogfights later down the line.

From the late 1950s onwards the British Government began looking to replace a number of its early second-generation jet aircraft. The RAF was looking to replace the English Electric Canberra in the long-range interdictor role, and the Hawker Hunter in the close air support role; meanwhile the Royal Navy was looking to replace their de Havilland Sea Vixens in the fleet air defence role[1]. Two aircraft programs were started to produce suitable replacements; the BAC TSR-2 was to be a highly advanced strike and reconnaissance aircraft to replace the Canberra. Meanwhile the Hunter and the Sea Vixen would be replaced by different versions of the P.1154; a Mach 2 capable VTOL aircraft developed from the P.1127 (the predecessor of famous Harrier Jump Jet). The Navy were not entirely happy with the idea of the navalised P.1154, believing that it did not suit their needs; and in 1964 they dropped out of the programme, deciding to purchase the F-4 Phantom from America instead. In the same year a new government was elected and in 1965 cancelled both the TSR-2 and P.1154 programmes on cost grounds, leaving the RAF without its much needed Canberra and Hunter replacements. The Government announced a plan to purchase the F-111K from America to replace the TSR-2 program (the F-111K would also eventually be cancelled on grounds of cost), while the Hunter would be replaced by F-4 Phantoms from America[2].

Both the Royal Navy and RAF were now set to purchase the F-4 Phantom. The RAF could have operated standard F-4 Phantoms (and to some extent would have preferred to)[2], however the aircraft was going to need modifications in order to be able to operate off of the UK's aircraft carriers, which were smaller than the ones Phantoms usually operated from. In a bid to help the British aviation industry (which had been hurt by a number of cancelled programmes), and make the aircraft suitable for use by the Royal Navy it was agreed that all UK Phantoms would be significantly modified, by British companies, from their US counterparts. The most notable change would be the replacement of the American J79 turbojet engines with larger and more powerful Rolls-Royce Spey turbofans; a modified rear fuselage to accommodate the new engines would also be built by BAC, and the aircraft's radar system would be built under license by Ferranti[1].

It was decided that the UK Phantoms would be based off of the F-4J, which was then the primary version in service with the US Navy at the time[1]. As the RAF and Royal Navy had differing requirements it was decided that two variants of the UK Phantom would be designed: the first variant, for the Royal Navy, would be designated F-4K or Phantom FG.1; while the RAF variant would be developed from the navy variant and be designated F-4M or Phantom FGR.2. Work began on modifying the F-4J to meet the Royal Navy's needs; the nose radome had to be made to hinge 180 degreed, to allow the Phantom fit on the smaller deck elevators of British carriers, and a telescopic nose gear was installed to allow the aircraft to sit pitched nose-up on the flight deck (by up to 11°), reducing take-off distance[1]. The new engines were installed at a slight downwards angle to further increase take-off performance and the rear fuselage to be redesigned to both accommodate the new engines and cope with the increased heat they produced; the air intakes also had to be made larger, and additional intake doors added in the fuselage to provide the Speys with the airflow they required[2]. Many other small changes were also made to UK Phantoms. The first F-4K prototype flew on 27 June 1966, with the First F-4M prototype flying on 17 February 1967.

The first F-4Ks were delivered in April 1968 and were designated Phantom FG.1, early the following year they began test flights from HMS Eagle and the USS Saratoga. During the testing the intense heat produced by the downward-angled Spey engines, while the afterburner was engaged, caused the flight deck plating of the USS Saratoga to buckle[2]. On-board HMS Eagle heavy-duty steel plating had to be welded to the flight deck; and be cooled using water from the ship's fire hoses between flights, in order to stop it from melting[3]. When the HMS Ark Royal was upgraded to operate Phantoms it had to have water-cooled blast deflectors and decking installed to prevent the Phantom's engines from damaging the flight deck [2]. HMS Ark Royal had finished its refit in 1970, by which point the refit of HMS Eagle had been cancelled, along with plans to build two additional aircraft carriers. With the Navy now only having one carrier capable of operating Phantoms it was decided to reduce the Navy's Phantom fleet down to 28 aircraft, with the other 20 FG.1s being transferred to the RAF. The remaining Royal Navy Phantoms would serve on the HMS Ark Royal (R09) until her retirement.

The first F-4Ms entered RAF service in May 1969, filling the role of tactical strike aircraft; they were given the designation Phantom FGR.2 (with FGR standing for Fighter/Ground attack/Reconnaissance). The RAF's Phantom FGR.2 was overall very similar to the Navy's FG.1 variant, but had a number of changes; they used a slightly different version of Spey engines (the FG.1 had faster afterburner engagement to aid with aborted landings on aircraft carriers), and naval features like the telescopic nose gear, slotted tail, and cockpit-controlled wing folding were dropped. The FGR.2 also had different avionics, the radar was slightly different and additional functionality such as an inertial navigation / attack system was added, as well as modification needed to allow the FGR.2 to use a gun pod and reconnaissance pod, among other changes[4]. Both the FGR.2 and FG.1 would later be modified with squared off tails, holding a radar warning receiver.

The Phantom FG.1s were withdrawn from Royal Navy service in 1978, with the decommissioning of HMS Ark Royal, and were transferred to the RAF to serve in air defence roles. The Phantom FG.1 was not originally equipped to carry a gun pod while in Royal Navy service, following their transfer to RAF service they were modified in order to carry the SUU-23/A 20 mm gun pod (the same one used by the RAF Phantom FGR.2s). The Phantoms were replaced in Navy service by the Harrier Jump Jet, which was able to operate from the Navy's new Invincible-class aircraft carriers (which were smaller than the HMS Ark Royal).

Following the Falklands War in 1982 the UK deployed a Squadron of FGR.2s to defend the Falkland Islands from any future attack; however this left a gap in the Air defence of the UK Mainland. It was decided to purchase 15 more F-4Js from America to fill this gap. The F4-Js were upgraded to F-4S standard and entered service with the RAF on 19 October 1984 under the designation Phantom F.3 or F-4J(UK)[2]. The Phantom remained the UK's primary Air defence aircraft until it was gradually replaced by the Panavia Tornado; the last FG.1s retired on 30 January 1990, the last F.3s retired on 31 January 1991, and the FGR.2 left RAF service on 1 November 1992. The FGR.2 was due to retire earlier however just before retirement it was called back into service to defend RAF Akrotiri, on Cyprus, during the First Gulf War[2].

Prior to the Phantom's retirement from RAF service there had been a plan to retrofit them with an upgraded version of the Spey engine. A program was started to design the new engines; they would have various improvements, the most notable of which being new turbine blades, reportedly manufactured from a single metal crystal[5]. These blades would increase the operating life of the engines under normal conditions, but also give the option of operating the engines at higher temperatures, and thus higher thrust (although this would come at the expense of reduced engine life). These engines were known as Spey 205s and had a maximum thrust of 25,000 lb (11,340 kgf)[5], compared to 20,515 lb (9,305 kgf) for the regular Spey engines; although it is unclear if they would be used at this thrust rating while in service. With the Phantom retired the Spey 205 programme was cancelled, and no engines were produced under the Spey 205 name; however 12 Spey 202 engines had been upgraded to Spey 205 standard for testing (and are now generally referred to as Spey 205s, or Spey 202 hybrids)[6]. It is known that after the programme was cancelled two of the Spey 205 prototypes, along with two standard Spey 202s were obtained by the ThrustSSC programme (the world's fastest car)[5], although reports vary on whether the car was fitted with Spey 202s or 205s when it completed its record-breaking run.