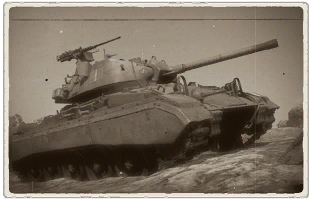 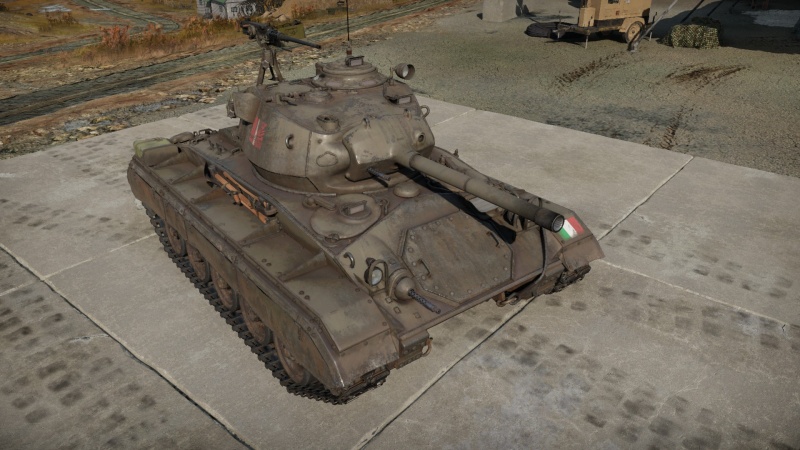 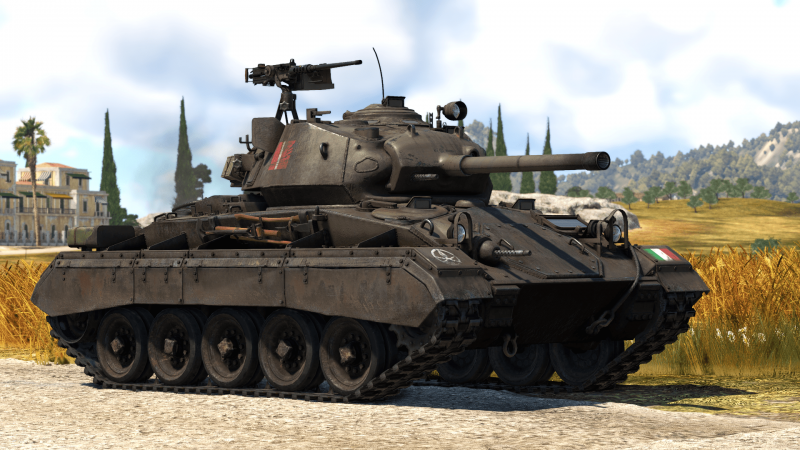 The Carro leggero M24 is a rank II Italian light tank with a battle rating of 3.3 (AB) and 3.7 (RB/SB). It was introduced in Update "Starfighters".

The M24 (Italy) has thin armour on all sides, and can only effectively resist machine gun fire or very low-penetrating shells. Its crew members are also sitting very close to each other, increasing the chance of it getting destroyed by a single shot. The V-shaped gun mantlet might bounce some small calibre shells if you are lucky enough. However, don't rely on it as the rest of the tank is still poorly protected.

The M24 travels at an average of 40 km/h on/off-road which is the average light tank speed. It also responds fast when reversing. Thanks to its short and wide tracks it is able to turn quickly. However the acceleration is poor, making it feel sluggish when performing short range manoeuvres.

The two machine guns on the M24 Chaffee are the good old .50 cal M2HB and the 7.62 mm M1919A4. The roof-mounted .50 cal can traverse 360 degrees and has great depression & elevation, posting a big threat to any plane that is flying too close to the M24. It has an unbelievable penetration of 31 mm at 10 m, meaning it can easily penetrate plenty of lightly armoured vehicles and even the side of some low rank medium tanks. The 7.62 mm, on the other hand, can only efficiently damage exposed crews due to its low penetration.

The M24 Chaffee is a very good tank with a fairly interesting playstyle. Instead of being permanently stationed at a single point and continuously firing at an enemy, this tank offers impressive manoeuvrability and speed which allows it to perform impressive flanking manoeuvres. The M24 can travel at around 38 km/h forward and -25 km/h backwards. Its reverse speed is very good if a quick getaway by going backwards is needed. Thus, this tank excels at "peek-a-boo" tactics in which one hides behind a rock or other large piece of cover and repeatedly inches out to fire at an enemy.

As early as 1942, the light tanks M3 and M5 Stuarts have been seen as severely lacking in the modernizing design of tanks and how they fight. The armour was seen as insufficient and the 37 mm gun was also deemed useless against even the standard German tanks like the Panzer III and Panzer IV. The system needed an upgrade, specifically a light tank that mounts the 75 mm gun seen on the M4 Shermans. An attempt to mount a 75 mm gun on a Stuart was deemed inefficient as it reduced ammo stowage and left the armour too thin on the design.

During the export of the M24 Chaffee, many nations were asking for it, including Italy. At the beginnings of 1950, Italy ordered the second biggest M24 order in history, consisting of 518 units bought when Italy accessed NATO.