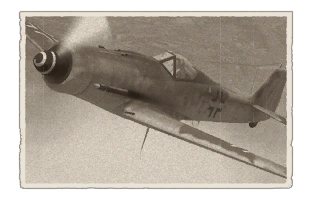 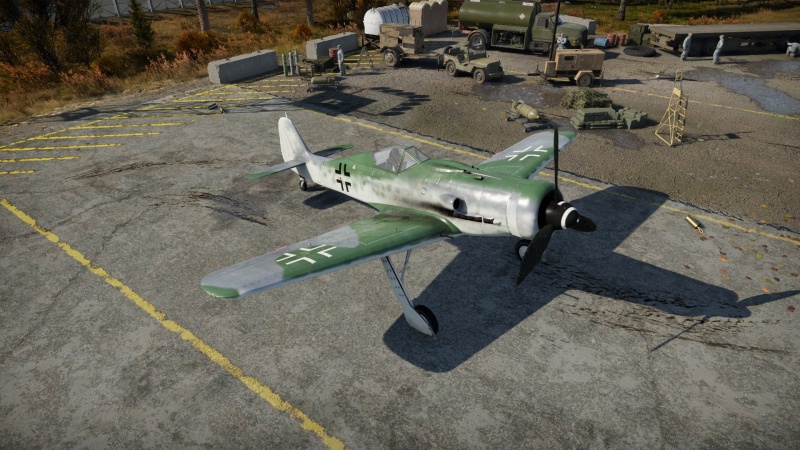 The engine and airframe characteristics are the major area where the new inline engine of the 190 Dora series benefits. Not only is the Jumo 213A smaller and more aerodynamically clean than a BMW radial, but it also has more power. Acceleration is extremely good across the entire speed range, but most notably at low-medium speeds and likewise for altitudes, being competitive against the vaunted La-7B-20 at low altitudes. The D-9 goes a blazing 621 km/h at sea level, which is 20 or so km/h faster than the Bf 109 K-4! Maximum speed at 2,200 m is 660 km/h (TAS) and rises from there, at 5,500 m it is 710 km/h, and 680 km/h at 8,000 m, steadily dropping off from there. Those are all extremely competitive numbers, beating out most of its opposition. Climb rate is equally good, taking 90 seconds to hit 2,000 m, 192 to 4,000 m, 297 to 6,000 m, and 430 to 8,000 m. Again, this is an outstanding performance that is better than most aircraft it faces. Dive acceleration and maximum diving speed are both extremely strong traits of the D-9. This plane redlines at about 880 km/h IAS, which is insanely high comparing to other planes it faces. At the start of an RB match, you can WEP for about 5-6 minutes before engine heat will give you trouble. The engine overheats at 120°C and the oil at 90°C. Engine heat decreases at a relatively slow rate while at 100% throttle and the MW-50 lasts for a total of 30 minutes.

The Fw 190 D-9 carries a strong weapon set with two 20 mm MG 151/20 cannons in the wing roots and two 13 mm MG-131 in the cowling. Like all 190s, the D-9 has a very generous ammunition load, packing 250 rounds per cannon and 475 rounds per MG. However, this combination has very slow muzzle velocity, thus shooting at closer ranges should be a priority unless in a head-on. The best MG 151 belt is the "Air Targets", as it's a good mix between tracers and stealth ammo, plus it features mine shells in a 2/3 ratio. The best MG 131 belts are either IAI, which contain an explosive filler and can be used as tracers, or Stealth. The bulk of the firepower here are the cannons, so maximizing your Mineshell (Minengeschoß) count is important. The best combination overall is Air Targets for the MG 151s and Stealth for the MG 131s. Stealth belts for the 13 mm make your 20 mm hard to see from far, as the tracer component of the Air Targets belt is very low, but at the same time it also makes it easier for you to track your 20 mm shots, as the tracers help a lot. The MG 151s feature higher fire rate than its contemporaries, but a slower muzzle velocity, so therefore you should lead your shots further. As a whole, the D-9's weapons allow good snapshot ability while retaining a lot of firing time, making it a well rounded yet powerful package.

The Fw 190 D-9 should utilise its great climb rate to reach high altitudes in order to perform Boom-n-Zoom runs on enemy fighters or to hunt bombers. Although it has the powerful cannons mounted close to the centre of the aircraft, head-on engagements are not recommended due to the unprotected and fragile engine. Instead, try to use the aircraft's great energy retention and engine power to outclimb your opponent's aircraft. Despite its reasonably good turn rate, it would be unwise to turnfight with enemy fighters, however you should be able to outmanoeuvre most strike aircraft.