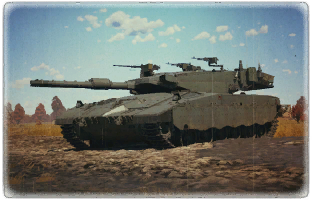 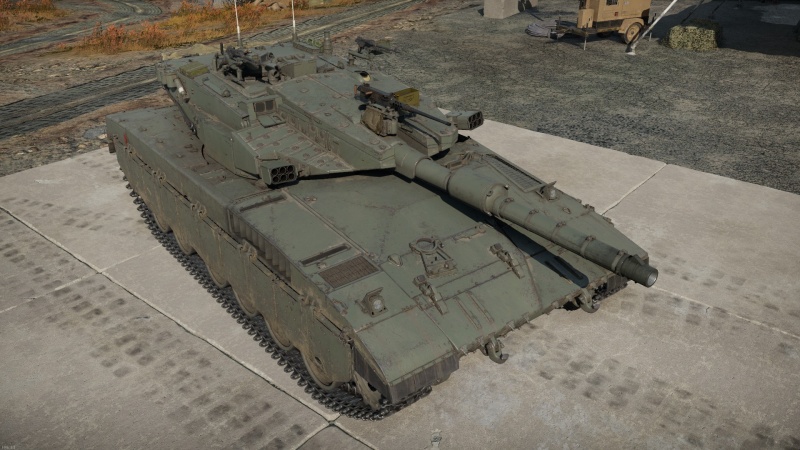 The Merkava Siman 3 Baz is a rank VI Israeli medium tank with a battle rating of 10.0 (AB/RB/SB). It was introduced in Update "Danger Zone".

Despite the hull armor being rather weak, the large engine, transmission and fuel tank along with the additional internal armor can help you withstand hits from some APFSDS rounds at the vehicle's battle rating. The turret also features armor that can easily bounce enemy darts and protect your vehicle from fragmentation shells due to the extreme angle of the armor as well as the 50 mm composite plating all over the front part of the roof.

The rear of the vehicle is also rather strong, featuring two 30 mm plates with an external fuel tank between them that can sometimes minimize the spalling of incoming rounds or stop low caliber APDS shells.

The turret also features a layout that even when penetrated can save the gunner or loader from getting hit by spall because of how low they are placed. The commander will usually be the first crew member to be knocked out, being the most exposed crew member of your tank. The breech is a rather large weakspot with a well placed shot under the gun having the potential of eliminating all of your crew.

Despite the rather large size of the vehicle, it is quite mobile. It features a 1200 horsepower engine featuring a 18.46 horsepower/ton ratio that allows it to accelerate to its top speed of 60 km/h on a paved road within 20 seconds. The vehicle also features two reverse gears with a top reverse speed of 10.3 km/h, which far from the best but it can still get you out of a bad situation reasonably fast. The vehicle features neutral steering ~15 seconds for a full 360 degree turn on the spot.

In RB, this vehicle can be used effectively to snipe (ideally in a hull-down position) using its amazing penetration at all ranges, laser rangefinder, generation 1 thermal optics and amazing zoom (gunner and commander), while exposing your turret and hiding your rather weak hull increases your survivability significantly.

The vehicle's good gun handling and mobility also allow for close quarters fights but your turret being placed so far back can lead to you being trapped having your front exposed to an enemy unable to shoot back and also your gun reload (6.7 seconds max crew) being slower than others of its type (6 seconds max crew) can lead to situations where you might not be able to shoot back fast enough if the first shot was not enough. You should also keep in mind the rather poor reverse speed and not be afraid to use the 12 smoke grenades you have available in 6 salvos of two in two launchers located at the front of the turret which are airburst-capable and 30 smoke grenades in a single smoke grenade launcher located over your loader.

Do not forget that your vehicle also features a total of four machineguns, one of them being a .50 cal mounted over your main gun with a generous supply of ammunition that are more than capable of sending enemy helicopters and low flying aircraft to the hangar while also being able to inflict damage to tracks of other vehicles and being able to knock out light vehicles from the side or rear.