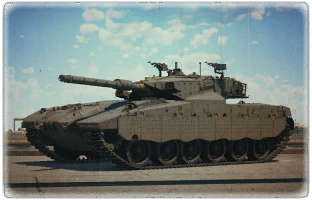 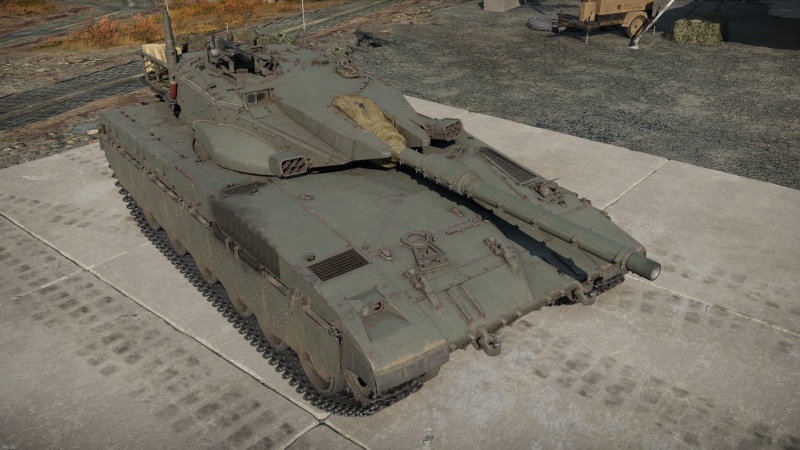 The Merkava Siman 2 Bet is a rank VI Israeli medium tank with a battle rating of 9.0 (AB/RB/SB). It was introduced in Update "Wind of Change".

The frontal armour on the Merkava Mk.2B is is overall decent in terms of protection. Its turret is compact and smaller than its counterparts at this BR, making it a difficult target to hit when hull down at range. Moreover, the shape of its turret features a complex design with extreme angles which boast high ricochet chances. This might confuse enemies who are unaccustomed to it, which might cause them to mess up their shots. But as a consequence to the turret being cramped as it is, penetrating shots at the turret's crew compartment might prove to be fatal.

The hull is not as impressive as the turret. On one hand, the lower and upper plates are rather thin, and despite the extreme angle of the upper plate, most APFSDS and chemical rounds will punch through with ease. On the other hand, the Merkava's engine and transmission are conveniently placed at the front to soak up most of the penetrating shot's energy and shrapnel, preventing it from going further into the tank and protecting the crew at the cost of temporary immobilization.

The Merkava Mk.2B has decent all around mobility, although it is slower than many other medium tanks at its BR. Turning bleeds speed quickly, and the reverse speed is decent at best.

Since the engine, transmission, and fuel tank are all positioned right behind the frontal hull armour and serve the role of additional protection, it is mandatory that the player prioritizes the research of parts and FPE first. Then, the player can get the NVD and LWS/LR or adjustment of fire upgrades for more accurate shots. After that, the player should focus on getting the M111, and they should use it as their main ammo type. 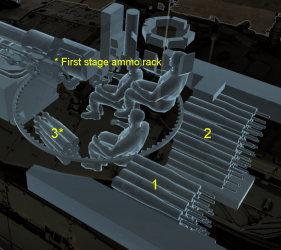 Ammo racks of the Merkava Mk.2B

The Merkava Mk.2B is built for urban warfare and sniping, and should be played as such roles. The armour and the equipment it features will make it a formidable foe in the battlefield. Use its compact turret to peak from unexpected locations and utilize its excellent 4-20x commander's view to spot enemies from afar.

Enemies that you must be most worried about are the Soviet T-72s and T-64B, as their frontal armour will be a difficult challenge to break through at range when they conceal their lower plate, and their guns are extremely dangerous from any range. The only viable tactic against them is to flank, but you must be very careful not to get flanked yourself, as your side armour can be easily penetrated by even SPAAs.