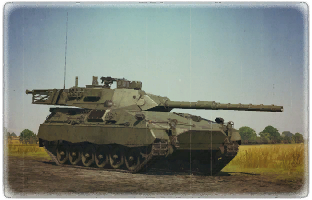 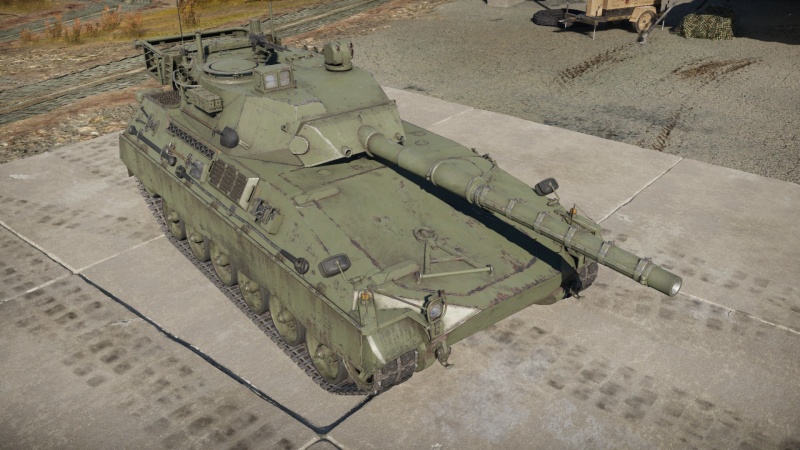 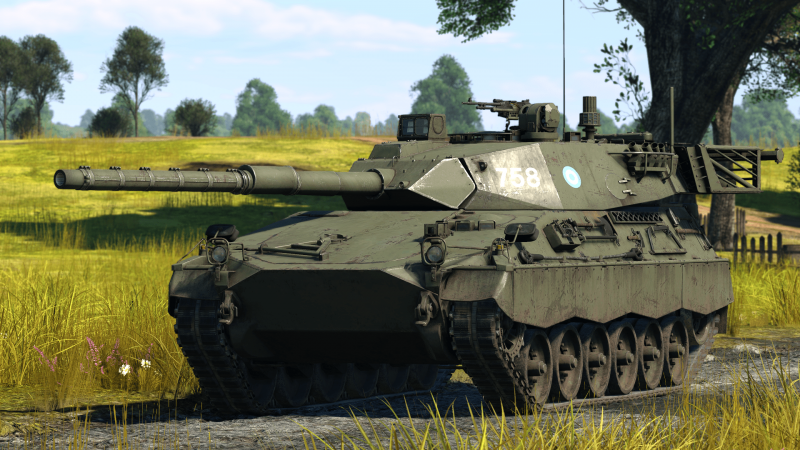 The Tanque Argentino Mediano 2C is a rank VII German light tank with a battle rating of 9.3 (AB) and 9.7 (RB/SB). It was introduced in Update "Raining Fire".

The front can defend against 12.7 mm machine gun ammo, but the side armour is only proof against standard machine guns of 7.62 mm. However, most enemies that can be faced will usually have a 12.7 mm machine gun or larger in their possession, making it so even a burst of bullets could riddle the TAM with holes. With this in mind, take caution when flanking a tank with a disabled gun to get a side shot, as you can easily lose a few crew members to machine gunfire. This becomes less of an issue after unlocking the APFSDS round when side shots are rarely as necessary.

The TAM is vulnerable to overpressure, and so HE rounds that hit have a chance of instantly destroying the vehicle.

The main armament of the TAM 2C is FMK.4 Model 1L, is a licensed variant of the British L7A1 105 mm. It has access to the powerful DM63, with a penetration of up to 436 mm. This is enough to destroy any tank, however ones with high angled upper frontal plate (UFP) it will be a challenge but flank and shoot from the side. 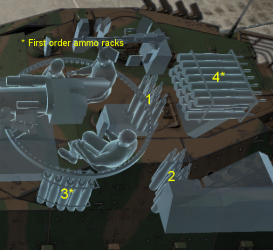 For the stock grind, it is recommended to get to a vantage point and use your binoculars to scout enemies, only taking easy shots. This can net quite a bit of RP if successful, the only problem is that such maps are rare. This vehicle requires much map knowledge to play, as it has poor gun handling and depression. Combined with the high repair cost, the stock grind is terrible. However, once you get DM33 you can get a bit more adventurous, but one must still exercise caution as the TAM 2C has poor survivability. Try not to ever expose much of yourself from cover. The 3rd generation thermals allow you to see enemies that few others on your team can see, as the TAM 2C is the only German ground vehicle to get 3rd gen thermals, or anything higher than 1st gen in the gun sight. It is recommended not to push corners, as the TAM has little armour, the engine is in the front (so you are immobilized at best) and the turret is mounted on the back of the tank, so you have to expose a lot of the vehicle in order to peek. The Laser Warning System (LWS) allows you to know when you are "painted" by laser rangefinders or designators, so you can duck back into cover whenever you are seen by an enemy. Finally, the DM63 APFSDS lets you to be much more risk-taking as you can now penetrate things like the Abrams's LFP, and more reliably penetrate the turret weakspots on Russian tanks like the T-80U. The machine guns, although with a lower rate of fire than the MG3 on most other German tanks of the BR, can elevate higher than the gun, so you can engage helicopters better. 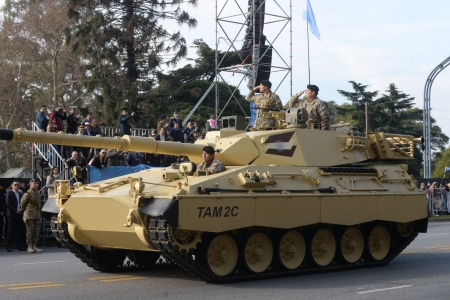 A TAM 2C of the Argentine army.

The TAM 2C was a modernized variant of the TAM (Tanque Argentino Mediano), the primary main battle tank (MBT) of the Argentine army. Initially designed in the 1980s, the TAM 2C originated as an upgraded variant of the original TAM, with improved weaponry, protection and equipment. The 2C variant prototype was initially unveiled in 2013, and the final production contract between the Argentine army and contractors was signed in 2015. In total, 74 TAMs will be upgraded to the 2C standard, which started in 2018.

In 2010, the Argentine army began the process of acquiring a new main battle tank to replace it's fleet of ageing TAM vehicles, developed in the 1980s. A number of foreign tanks were considered, including the German Leopard 2 , French Leclerc, Israeli Merkava and the Russian T-90. However, at the end, they chose to upgrade the existing TAM vehicles rather than proceeding with a new tank, due to budget restraints and the fact that most MBTs would've had trouble traversing Argentina's rough terrain. Several foreign firms bidded for the modernization, which was eventually given to Israel's Elbit Systems.

The TAM was given many upgrades, primarily to it's equipment. The vehicle received a new electrical turret drive allowing for faster turret traverse, as well as a set of NVD (thermal imager) devices for the commander and driver. The vehicle received an upgraded set of laser rangefinders, more accurate than those fitted on the original TAM. Additionally, racks were added to the rear of the vehicle for stowing crew belongings, and an APU unit was added to provide power when the engine was turned off.

In terms of armament, the TAM 2C retained the 105 mm gun fitted on the TAM. However, it received a new stabilization system that would turn off when the gun was being loaded. This made loading much easier, as the previous system would cause the gun to continuously change elevation while traversing rough terrain, which prevented the gun from being loaded properly. The TAM 2C also received a new APFSDS round with much-improved penetration, and a new HEAT-FS round.

The original armour scheme of the TAM was retained, with a maximum of 50 mm of armour on the upper glacis. Mobility also stayed the same, with no upgrades to the engine block. However, the TAM 2C lost the ability to carry the TAM's extra rear fuel tanks, as the space was occupied by the new APU unit.

The first TAM 2C prototype was unveiled in 2013, having been upgraded by Elbit systems. After technical evaluations, the vehicle was accepted for service, and the Argentine government signed a contract with Elbit for the modernization of 74 TAM vehicles. In total, the modernization of these vehicles will cost $110 million dollars. While expensive, this is tiny compared to the cost of acquiring a completely new MBT. The first TAM was reportedly upgraded to 2C standard in 2017, with initial production starting in 2018.