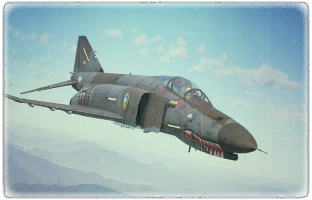 The F-4F Phantom II (Early) is a gift rank VII German jet fighter with a battle rating of 10.7 (AB/SB) and 10.3 (RB). It was introduced during Update "Ixwa Strike" as a reward for the Future Technology event.

The F-4F Early is armed with:

The F-4F Early can be outfitted with the following ordnance presets:

The aircraft is pretty heavy, rather quick in acceleration and top speed and doesn't have the best turn time. Its armament, however, is impressive. With the gun pod modification equipped, you'll fire enough lead downrange to destroy any air target. Using the phantom as a turnfighter is generally ill-advised. Therefore, try to ambush a unsuspecting enemy. Even the single 20 mm cannon will give any foe a fiery end.

Using the bombs on the F-4F usually isn't that great of an idea: the match often evolves to the later stages before you will be able to rearm, and then two situations usually occur. Situation 1 involves your team destroying more aircraft of the enemy team, leading to a victory where bombing bases turned out to not be decisive and therefore it can be argued you are a dead weight. Situation 2 is when your team is losing. After you dropped the payload and destroyed the base in situation 2, the opposite team will start to hunt down the remaining friendly players. You might be able to survive 1 or 2 enemies, but having four on our tail usually ends badly.

Any engagement will boil down to three basic situations: you find an enemy doing a head-on, you chase an enemy or you get chased by the enemy. When doing a head-on, missiles aren't very effective so don't bother using them. Keep in mind if you're fighting another phantom, that he'll often have the afterburner on, and given the engines slight downward angle, kind of "drift", which has to be taken into account before taking the shot. You usually want to fire at around 3 km during the head-on, and keep on firing either until you get a critical hit(i.e he lost tail control, wings or he is on fire) or you can hear his shells whizzing by. In either situation, break off (an aircraft with no control travelling at 600 or more km/h still has a lot of kinetic energy, and the second situation speaks for itself). Otherwise, try to get onto his tail by starting to break off before he has passed you.

If you are chasing an enemy, try to predict his movements: your shells have a high muzzle velocity, but the enemy is still a fast and therefore difficult target. Fire along the path they can possibly go through, wasting ammo but securing a (usually critical) hit. Know when to disengage, i.e rolling scissors or another enemy is engaging you.

If you are being chased by the enemy, try to be as far and as fast as possible: if you have friendly fighters nearby, try to bait the enemies towards your teammates. If you play on a map with ships that have CIWS, many players usually underestimate those systems. It doesn't give you the kill but it keeps you alive to get more kills or bait more players. If a missile is locked onto you, try to lose as little energy as possible whilst also making sure the missile won't hit. Remember that you do not have countermeasures.

The missiles on the F-4F, apart from the AIM-9J, aren't very good. the AIM-9B FGW.2 and AIM-9E both have pretty poor lock-on range, small targeting window and they can pull roughly 10 G. The AIM-9J is better, it has a higher lock-on range, a pretty large targeting window, can pull 20 G and is faster. You want to fire a missile when the enemy is close and slow. Very close targets usually don't have the time to activate countermeasures, or the countermeasures are flat out ignored. Another way of using missiles is to make the enemy lose their energy, and making them an easy target to hit with either another missile or with your cannon.