Initially, most units were imported from Krupp until 1911, when the Army’s Osaka Arsenal was allowed to produce them domestically under license.

While outdated after WW1 and technically replaced by the Type 4 15cm howitzer (1915) and later the Type 96 15cm howitzer (1936), it would still see common use in heavy artillery units until 1945 due to the number of cannons produced and available, even being used on the Type 4 Ho-Ro from 1944 onwards.

Mainly built as an infantry gun, the shells don't provide much anti-tank penetration, but pack a whole load of explosive mass that will put any medium to even heavy armoured vehicles dead in its tracks if fired under or on top of the tank. 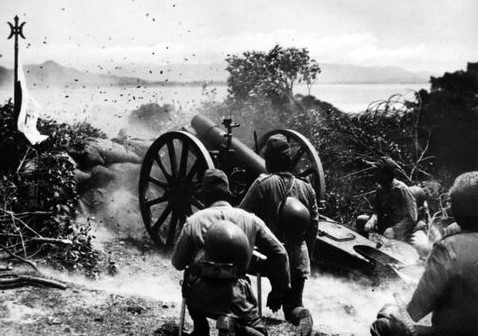 Imperial Japan, seeking out new artillery equipment, acquired 150 mm L/12 howitzers from Krupp in Germany in 1903. Starting by ordering a total of 36 from the manufacturer, Japan then acquired the license to manufacture the howitzers domestically. The resulting howitzer in Japanese service was called the 15 cm Type 38 field howitzer (for the 38th year of Emperor Meiji's reign (1905)).[1]

Essentially unchanged from the Krupp L/12 model, the gun retained rather modern features such as an open box trail and interrupted screw breech.[2] The weapon was rather lightweight at 2.09 tons.[3], due in part to a simple recoil mechanism needed for the small propelling charges for the shell. Consequently however, the 150 mm Type 38 suffered from a short effective range of less than 6,000 m. This led to future procurements of howitzers such as the 150 mm Type 4 that had a higher effective range than the Type 38.

Though replaced from front-line service with newer howitzers by the 1930s, the Type 38 were still used until the end of World War II.[3] The guns were notably used in the Second Sino-Japanese war,[4] and as the main armament of the Ho-Ro self-propelled gun, assembled at the Osaka Arsenal.[5]