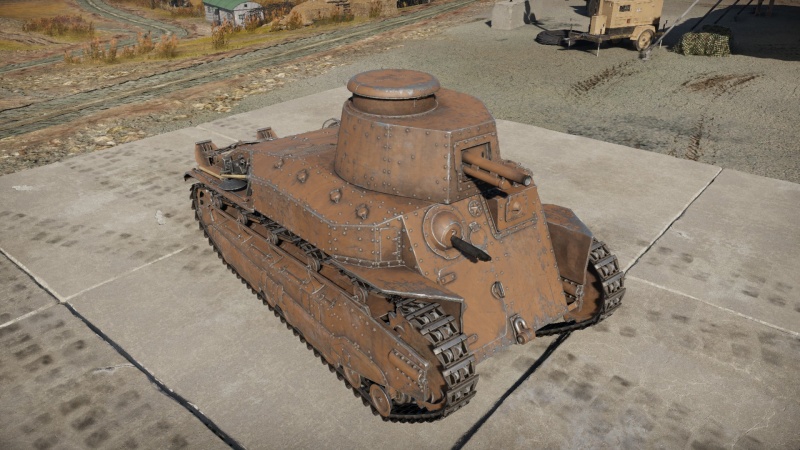 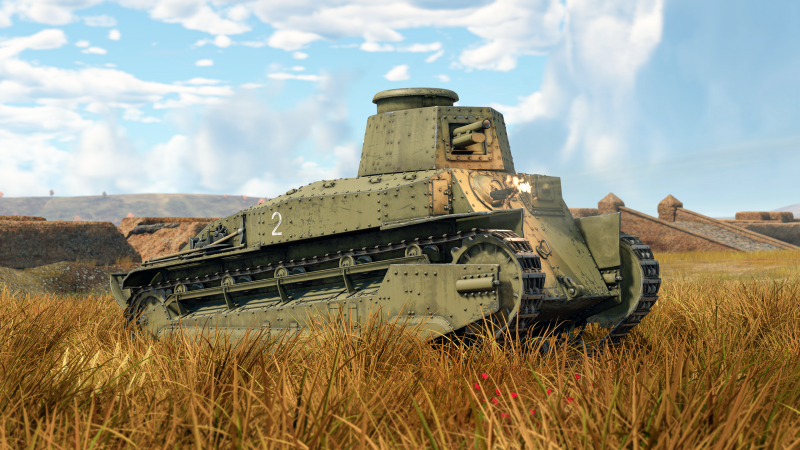 The Type 89b I-Go Ko 八九式中戦車 (乙型)「イ号」 is a reserve rank I Japanese light tank with a battle rating of 1.0 (AB/RB/SB). It was introduced in Update 1.65 "Way of the Samurai" along with the rest of the initial Japanese Ground Forces Tree.

The armour on the I-Go Ko is lacking against contemporary enemies. With an armour thickness of less than 20 mm (aside from the spaced areas) all over, even large-calibre machine guns can penetrate the tank frontally. Not to mention, the front armour is only mildly sloped and presents a large target that can result in the vehicle being knocked out with a single penetration. It is recommended to not rely on your armour, nor advance on an enemy unless they are incapacitated (i.e. gunner or cannon knocked out).

Much like the armour, the I-Go Ko leaves something to be desired in the mobility department. While the tank is reasonably mobile in close-quarters situations due to the good acceleration, the poor top speed will result in long trips across large maps and between capture points compared to other reserve tanks. 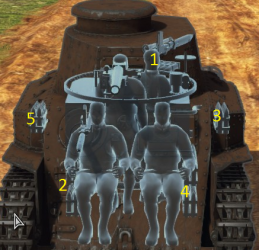 Ammo racks of the I-Go Ko

The Type 91 machine gun is mounted in the hull with limited traverse. With a limited magazine capacity, slow traverse speed, and small calibre, this machine gun usually doesn't serve much use in combat except as a tool against open-topped SPAA or tank destroyers, or to ping enemies on the map for teammates to see. As is common with many Japanese tanks, the turret is not fitted with a forward facing coaxial machine gun, so this machine gun is the I-Go Ko's only other weapon option if the main gun is incapacitated.

The Type 89b I-Go Ko, despite its rather tractor-esque look, is a mobile tank that could use its speed to get to an enemy's flanks and cause some serious damage. The 57 mm cannon is unfortunately rather pitiful even in Rank I, with a penetration value of between 20 to 30 mm with APHE at standard combat ranges. Therefore, it is usually best to catch enemies unaware and go for flanking shots against their weaker side armour by driving around, instead of directly toward them. The 57 mm low-velocity shell does have an advantage of a rather prominent parabolic trajectory so it is possible to lob shells over hills to hit unsuspecting enemies behind it.

The gun's poor penetration will change when using the High Explosive Anti-Tank (HEAT) shell. This shell has 55 mm of penetration at any range but still has considerable drop-off due to the low velocity of the gun. It's a good enough anti-everything shell that can penetrate most targets you will meet, especially those pesky French tanks, which tend to be quite well armoured. The Type 3 HEAT shell, fortunately, has just enough penetration to get through them, although it is generally recommended to try to aim for weak spots and be prepared for the shell to non-pen. This shell will also most likely destroy any truck or open-topped vehicle with a good hit.

Pretty much everything is a threat to this vehicle due to its mediocre mobility and poor armour. Fast vehicles like the M2A4, BT-5, A13 Mk I, and AMD.35 in particular are a difficult encounter; the I-Go Ko is reasonably fast at close quarters, but not that fast. The tank's sluggish turret traverse makes tracking a close target difficult and at long range the slow shells are difficult to aim precisely at a moving target. The 45mm 20-K gun that the commonly encountered BT series have can easily destroy you at any range with a well-aimed shot.

Vehicles with autocanons and heavy machine guns like the M2A2, GAZ-AAA (DShK), Pz.II C, and T-60, are the I-Go Ko's worst nightmare. Their high volume of fire and good mobility coupled with the I-Go Ko's lack of a coaxial or pintle-mounted MG puts the I-Go Ko at a large disadvantage. SPAAs generally should be considered by the I-Go Ko to be just as deadly, if not more so, than conventional tanks.

One more vehicle type to worry about is aircraft. Due to the tank's roof being thin, aircraft with anything more than a heavy machine gun will be able to penetrate the I-Go Ko. Some examples of these include the 12.7 mm-armed P-26A-34 M2 and F3F-2, and the 20 mm-armed He 112 A-0 and D.500. 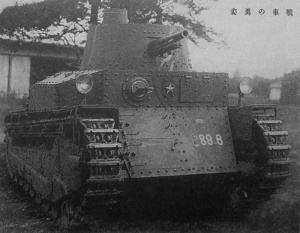 The Type 89 I-Go was Japan's first domestic tank design, yet it showed a lot of features that were revolutionary and would become a trademark of the Japanese tank designs. The Type 89 I-Go had a four-man crew in the tank with two in the turret. The turret held a 57 mm low-velocity gun meant for fighting fortifications due to the tank's role as infantry support. A peculiar feature on the Type 89 was the rear machine gun on the back of the turret. This machine gun was meant to enable the Type 89 to engage forward targets with a machine gun or its 57 mm gun and would be a design trend in future tank development.[1]

Even after World War II, some Type 89s were still seen in service of the French during the First Indochina War, using the captured Japanese armour in a unit known as 'Commando Blindé du Cambodge'. 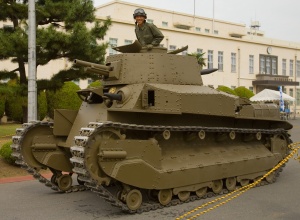 Many Type 89 relics still are visible in the wild usually reduced to a wreck with a handful of tanks still being in a good condition. These in good condition are located in:

Only 1 I-Go Otsu remains in running condition, which was restored at the JGSDF base at Tsuchiura together with the last Type 3 Chi-Nu to still exist. Both are stored on military ground so aren't at all times in public display. The I-Go Otsu usually makes an appearance during the open day of the Tsuchiura base. The vehicle can be seen in media still running after being restored by the JGSDF.