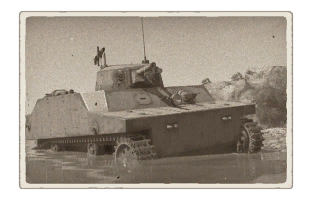 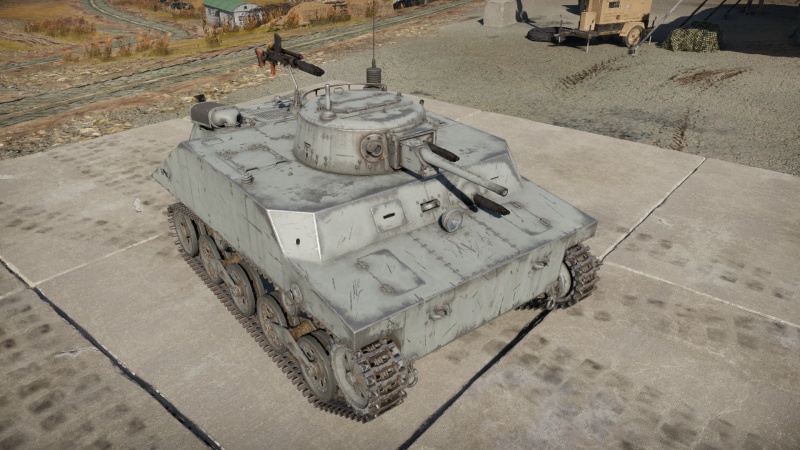 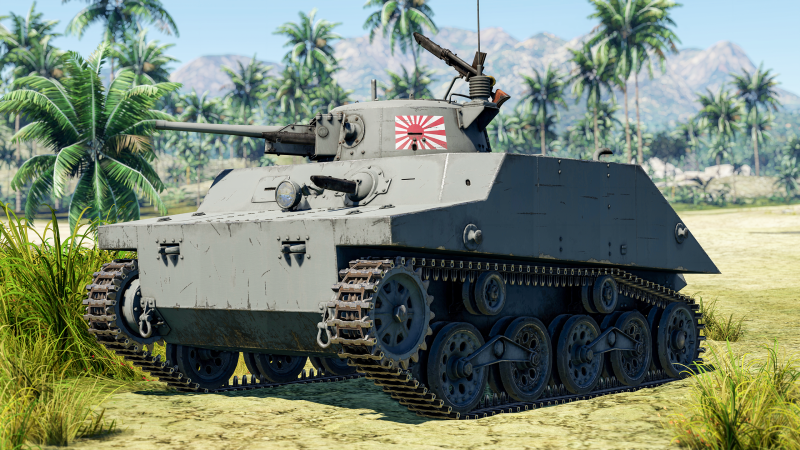 The Type 2 Ka-Mi (特二式内火艇「カミ」) is a rank I Japanese light tank with a battle rating of 1.0 (AB/RB/SB). It was introduced along with the initial Japanese Ground Forces tree in Update 1.65 "Way of the Samurai". An interesting thing about this tank is that it does feature propellers on the backside, because it is amphibious and can allow players to exploit aquatic terrain to their advantage in War Thunder. The Ka-Mi was able to be amphibious without the pontoons, but only on still waters, like lakes or rivers. If it were to go on the high seas, special pontoons were needed to keep it afloat. 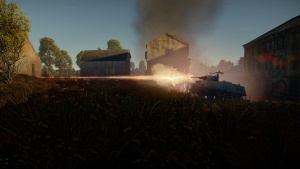 Ka-Mi is best used from cover, where it can hide its massive body from enemy fire. Here: shooting from behind the hill on Eastern Europe, village centre.

The Ka-Mi features a very unusual layout. Being originally designed as an amphibious tank, it is very lightly armoured. With armour thickness ranging from around 8 mm, and just reaching 12 mm on the larger portions of the hull, this tank is very fragile to anything bigger than MG fire. To increase survivability, one can enter a fight backwards in order to absorb shots with the engine, though using hard cover (such as hills and rocks) is preferable.

This armour pattern really shines at distances (500+ m), where a little angling can mostly defeat HMG fire. Since most guns at this BR are quite inaccurate, exposing only your small turret should not be a problem since it is hard to hit. If caught in an open field (still at a distance), try directly facing your foe. Angling is useless with armour so thin, meaning some shells might punch through cleanly and just fly by your crew in the uninhabited portions of the tank (ammo racks located there are pretty small, so these are often missed in such cases). 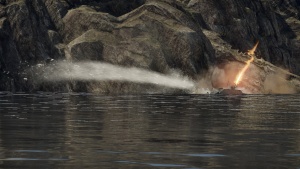 Ka-Mi when either firing or having its propellers on becomes an extremely visible target, even from afar. The jets of water extend over 5 times the length of the tank behind it, reaching nearly 4 times its air draft.

The Ka-Mi provides a decent top speed on the road but lacks such mobility when going off-road. Narrow tracks make mobility in snow/desert maps really painful. A good thing to mention: this tank has a respectable reverse speed of -11 km/h with two reverse gear, which is a rare feature at this BR. It can sometimes get you out of bad situations.

Compared to other tanks at its BR, the Ka-Mi has average mobility with no significant drawbacks, offering an ability to reach most destinations with the rest of the team, or to position for sniping or ambushes. The Ka-Mi is also somewhat prone to drifting when taking sharp turns at high speed.

The Ka-Mi travels at 10 km/h (AB/RB/SB) in water but can't propel itself backwards. Trajectory should be planned accordingly to avoid being stuck.

The main gun of the Ka-Mi is a very basic 37 mm cannon with decent penetration and spread. A major disadvantage is its slow turn rate, making it preferable to have already aimed the turret before emerging from cover, and similarly attempting to hide it as early as possible, once the enemy emerges from a flanking direction. It does, however, feature a good depression rate, making it a potent weapon when attacking from the hills.

The 37 mm is a decent gun with a good reload time and good ammo count: don't bother wasting ammo while stationary, just fire on the move. This tank has a "lock", which is a primitive form of gun stabilizer, decreasing vertical movement from the main armament - at low speeds, gun handling sees significant improvement. Note that turret rotation speed is somewhat slow: pre-aim your gun in the general direction of the enemy in close-quarter engagements.

It's highly preferable to use the Type 1 APHE ammunition over the stock one, due to its significantly better penetration and its explosive filler. While the Type 94 shell may only damage enemy crew or components with anything barring a perfectly-placed shot, the Type 1 shell will nearly always result in an effectively destructive hit, damaging modules and crew alike. Similarly, the penetration characteristics of the Type 1 shells make all the difference between a ricochet and a successful knock-out when dealing with other tanks at this BR. 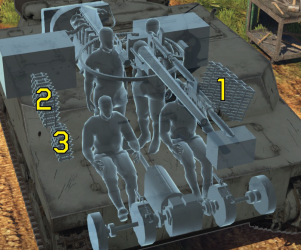 Ammo racks of the Ka-Mi

Due to a high maximum ammo capacity, leaving at least the first ammo rack empty could be preferred in order to reduce the chance of enemy shots causing any ammo detonation. This can be done by only carrying 73 or fewer shells. Furthermore, when angling the tank to the enemy, it's preferred to expose the left side to the enemy, rather than the right one, which will always contain a loaded ammunition rack. To prevent crew members from being knocked out, the right side should be protected whenever possible. 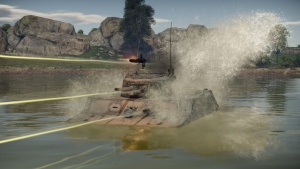 One thing that saves the Ka-Mi's reputation is its MG count: there are 3 of them. One is coaxial, fired by the gunner, another is pintle-mounted, also fired by the gunner, and the last is hull-mounted, fired by the machine gunner. These weapons have good burst capabilities that can take out lightly-armoured targets (Soviet SPAA trucks, open-topped SPGs, etc.). This also allows the Ka-Mi to become an unlikely SPAA, armed with three machine guns and a cannon. It can quite easily damage low-flying biplanes, although sustained hits are still required to successfully down an aircraft. One downside of the Type 97 machine gun is its low ammo count, which limits bursts to a couple of seconds before having to reload. Reloads, fortunately, don't take long.

The Ka-Mi has a rare setup for its BR, featuring a group of three 7.7 mm MGs that allow it to quickly dispose of enemy lightly-armoured vehicles, especially rank I SPAAGs. The MGs are supplied with limited ammo capacity, allowing for a short bursts before reloading. In effect, shorter bursts into different portions of the enemy vehicle are recommended over lengthy bursts to gradually disable modules and crew members.

With its average armour, firepower and mobility, the Ka-Mi should be played wisely, with a bit of finesse: you will not survive frontal engagement, neither can you flank nor snipe. This leaves you the support role. Always play as a team when driving the Ka-Mi, bringing an additional potent close-range gun to the fight, threatening your foes while more potent allies reload.

Use hills to your advantage, fall back when outnumbered and beware difficult terrain since it can slow down your manoeuvres significantly. Do not rely on the armour as even with angling, its effective protection is nearly always penetrable by enemy tanks. 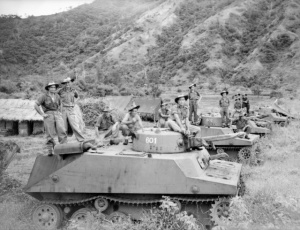 A couple of captured Ka-Mi's with their pontoons deattached for land usage. Rabaul, 1945

While tanks were used mainly in the Imperial Japanese Army (IJA), the Imperial Japanese Navy (IJN) also owned their own land forces known as the Special Naval Landings Forces (SNLF). Their standard tanks was the Type 95 Ha-Go, but the SNLF wanted a more capable tank fitted for amphibious landings. The Japanese have touched upon the amphibious tank concept since the 1930s, but one built to withstand rough seas needed more durability than one designed for rivers and more calm waters. The IJN approached Mitsubishi in 1941 to develop the new amphibious tank, named Ka-Mi "Special Craft". The tank was to go along with the IJA's Type 2 Ke-To light tank, using a similar turret design. The suspension of the vehicle was one derived from the Ha-Go. The amphibious capability was given to the tank via two removable pontoons on the front and back of the tank. A trunk and a tower were fitted over the engine and turret respectively to prevent water from flowing into the engine and crew compartment. The vehicle, accepted as the Type 2 Ka-Mi, began production in 1943. Up to 182 tanks were produced by the end of the war, mostly supporting Japanese positions in Saipan and the Philippines.[1] 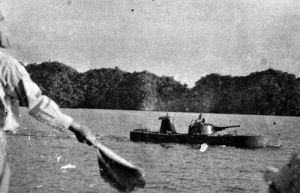 The Type 2 Ka-Mi saw combat in 1944 in Saipan and Leyte.[1] They assisted the stationed SNLF units on these islands in attacking the American beachheads via amphibious assaults. The Ka-Mi were also stationed in Luzon, and a handful were captured by Allied forces in 1945. Their limited numbers and usage meant they fought with relative obscurity to the IJA's Type 97 Chi-Ha tanks. However, the Type 2 Ka-Mi was deemed rather successful by the IJN. Some have dubbed it the "best-designed amphibious tank of the war" after the conclusion of World War II. This led to successors like the Type 3 Ka-Chi, a parallel to the Type 1 Chi-He, and the Type 5 To-Ku, based on the Type 5 Chi-Ri.