The Type 90 75 mm is a Japanese field gun adopted in 1930 meant to replace the older Type 38 75 mm. The field gun was initially built like a traditional field gun but later would be remodeled to be mobile so that could be towed by vehicle. It also saw limited use on the Ho-Ni I and would lay the basis for the Type 3 75 mm tank gun which would be primarily mounted in the Ho-Ni III and Chi-Nu.

In the aftermath of World War I, the Japanese sought to modernize their inventory of artillery weapons, which mainly consisted of the 75 mm Type 38 field gun. A new field artillery design utilizing the new autofrettage manufacturing method was desired and so the Japanese went to the Schneider company in 1925 to acquire the license to be able to obtain the equipment needed for this manufacturing method. During the visit, the Japanese also acquired batches of Schneider 75 mm field guns and 105 mm field howitzers for trials.[1] 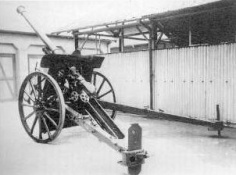 Around the same time, a Colonel Saigo from the Technical Department's artillery office, in cooperation with the Osaka Arsenal, designed a 75 mm field gun for use. Its characteristics were comparable to the Schneider's 75 mm field gun, and so the two underwent comparative trials in April 1927. The result was mixed as both guns have their praise and complaints. The decision was made for parts of the Schneider gun to be license-produced in Japan while incorporating their own design requirements in the weapon, including the retention of a Krupp-type horizontal breech seen on the Type 38 field gun. The completed assembled weapon was designated the 75 mm Type 90 field gun in 1930.[2]

A Type 90 field gun (motorized) being towed with gun crew.

A total of 786 of the Type 90 field guns were produced from 1931 to 1944.[2][3] Two variants of the 75 mm Type 90 gun was produced, one with a horse-drawn carriage with wooden wheels (221 produced[2]), and another with a stronger suspension and rubber wheels for motor vehicle towing.[3][4] The motorized variant began seeing production in 1935-36, but an attempt was made in 1935 to replace the Type 90 with the more lightweight 75 mm Type 95 field gun (which used the Type 38's barrel and ordnance), briefly stopping the Type 90's production.[5] However, the fighting in Manchuria showed that the Type 90 field gun's longer range, in part due to the new high-pressure ammunition fired from the autofrettage manufactured barrels, was more desired for the fighting. When the Type 90 restarted production in 1940, the motorized variant became the main manufactured version.[5]

The Type 90 gun's high-pressure barrel and ammunition would make it a favorable weapon for use against enemy tanks, whether as an emplaced weapon or mounted in a armoured fighting vehicle such as that of the Ho-Ni SPG[6] or Chi-Nu (with a gun based off the 75 mm Type 90).[7]

Although built as a replacement to the Type 38 field gun, the Type 90 was never able to completely replace the weapon. Allied reports indicated that they never encountered the Type 90 field gun in any theater up until the Battle of Luzon in 1945.[5][8]