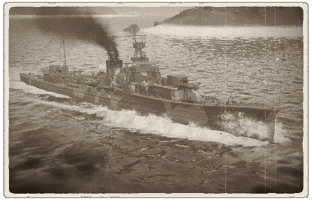 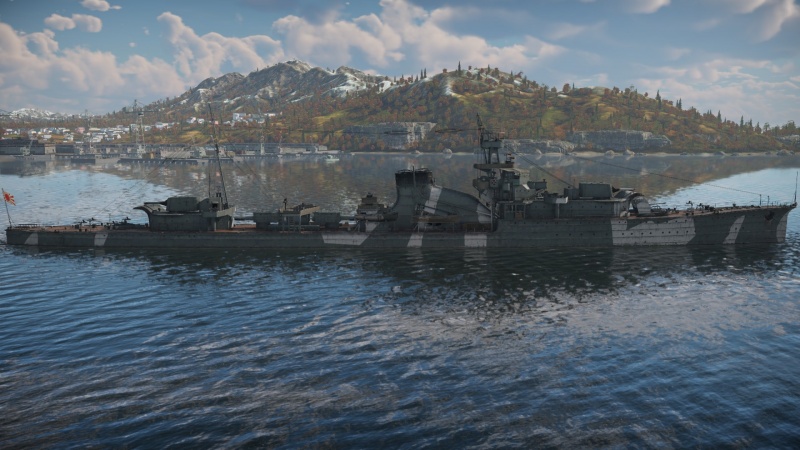 The Yubari-class, IJN Yubari, 1944 (夕張, namesake: Yūbari River) is a premium rank III Japanese light cruiser with a battle rating of 4.7 (AB/RB/SB). It was introduced in Update "Direct Hit".

The IJN Yubari was built between 1922 and 1923 as an experimental test bed for various new innovations made by the Imperial Japanese Navy, such as weight-saving design and the then state-of-the-art Kampon boilers. As a result, the Yubari ended up being something between a very heavy destroyer and a very light cruiser.

The Yubari is a very small cruiser, being only slightly longer and heavier than the Akizuki at 138.9 metres in length and 4,450 tons of displacement. When combined with her decent mobility, she can be somewhat harder to hit at range.

Being such a small and very light cruiser also means that the Yubari doesn't have much protection. Her armour profile is roughly the same as the Kuma with smaller shell rooms, which means it's very poorly protected against any other cruisers and even destroyers at closer range. Yubari's fatal weak spot is her rear ammunition storage that sits above the waterline and is very easy to hit and detonate.

Yūbari offers speeds closer to destroyers over light cruisers at the cost of still getting a rather far large fleet spawn. Her speed and small figure allow her to dodge shells with more ease compared to a regular-sized cruiser.

The armament of the Yūbari is rather lacklustre for a cruiser, but it should be kept in mind that she's built as a testbed and plays closer to a destroyer rather than a cruiser with her size, speed and fewer (but larger) guns compared to regular destroyers. Her 4 x 140 mm cannons come in 2 dual-mount turrets in the front and back of the ship, coordinating the 120 mm/45 in main and auxiliary calibre shooting with one button allows the captain to output quite the forward firepower, leaving your target size minimal, while still dishing out considerable damage against destroyers and light cruisers.

Broadsiding to use the back turret offers more damage output but makes the ship a larger target so keep that in mind. The armour should suffice against weaker destroyers, but facing heavy-end destroyers and other cruisers, it's ill-advised.

As mentioned with the primary, the auxiliary calibre should be fired in unison with the primary guns as it doesn't offer too much on its own. The 120 mm is mounted in a single mount turret as the most forward turret 1 level below the forward primary.

Having 25 x 25 mm Type 96s, Yūbari offers a decent amount of close anti-air cover for herself and nearby vessels, causing havoc among small patrol boats and shredding them within ~2 km.

Carrying 2 torpedo launchers with 2 tubes each, Yūbari offers 4 torpedoes on the ready with 4 more on reserve ready for reloading. The turrets are a rather old model and are slow to traverse.

The Type 8s aren't the top-of-the-line Type 93 Long Lance torpedoes but still offer the same bang and range without the speed.

The Imperial Japanese Navy authorized the construction of the Yubari class during the First World War as part of the 8-4 Fleet Construction Program. Due to budgetary constraints, the ship did not start construction until 1922. Like many pre-war Japanese vessels, it sought to put as much weaponry as possible on a limited size hull. It was designed to have the hitting power of a 5,500-ton class cruiser in a 4,500-ton package. While in many cases, this resulted in overweight, top-heavy and unseaworthy boats, the Yubari class accomplished this using an intelligent application of structural armour. [1]