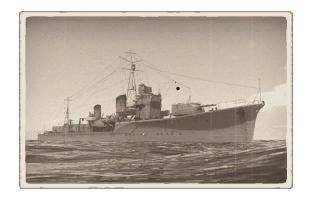 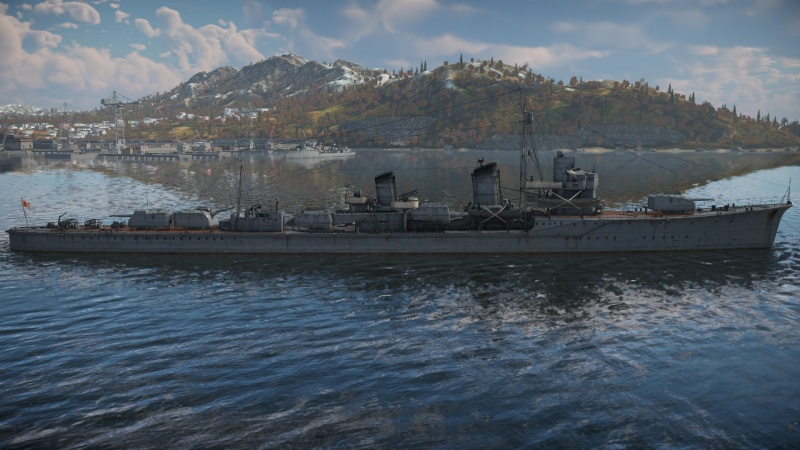 The Shiratsuyu-class, IJN Yuudachi, 1942 (夕立, namesake: Evening Squall) is a premium gift rank III Japanese destroyer with a battle rating of 4.7 (AB/RB/SB). It was introduced during Update 1.89 "Imperial Navy" as a reward for the 2019 Operation H.E.A.T event.

The Yuudachi's main armament is comprised of five 127 mm Type 3 cannons in two dual and one single gun turret. Note that none of the turrets are superfiring, requiring a broadside to bring all guns to bear.

The Type 3 cannon is the same one found on most of the modern IJN destroyers. Unfortunately, it suffers from multiple drawbacks such as slow reload and traverse speed. This makes the cannon relatively ineffective against aircraft, coupled with the lack of proximity fuse shells (only time-fused shells are available). It also does not have access to any armour-piercing rounds, limiting its effectiveness against heavy warships. The cannons will do just fine against destroyers and small craft, but the poor rate of fire will leave you unable to win against most other destroyers in a straight up gun battle. However, you are still much more well-armed than reserve destroyers, and can destroy most of them in an even fight.

The ship's anti-air armament includes two 40 mm cannons mounted near the ship's center, with one gun on each side of the ship. These cannons gain access to time-fused shells, which is unusual for their calibre. While these cannons are not as powerful as the Bofors L/60 Mark 1 (40 mm), they can still pack quite a punch towards aircraft and small ships. They have a reasonably fast rate of fire, although they will need to reload often. In order to utilize these cannons to their full potential, make sure to max out your crew training for auxiliary cannons so that your AI can take down planes for you. Despite this, the Yuudachi is not equipped with enough weapons to deal with aircraft alone. Try to stick near friendlies with more automatic cannons who are able to protect you.

The Yuudachi is not equipped with any other secondary artillery systems.

The Yuudachi is equipped with a very formidable eight torpedo launchers in two quad mounts. In addition, the ship carries an extra set of torpedo reloads, totaling to 16 torpedoes. The torpedoes carried by this destroyer are the very powerful Type 93 Model 1, Mod 2 torpedoes, commonly known as the "Long Lance". These torpedoes have a very lethal warhead; they are the third most powerful torpedoes in the game by explosive mass. They are also incredibly fast and have a very long range, being able to reach over 20 km. This grants the Yuudachi a significant advantage in long range combat, as the torpedoes can outrange even cruisers. It is a good idea to stay out of harm's way and launch torpedoes at the general direction of enemy warships, this will usually lead to a few unlucky enemies running into torpedoes. These torpedoes are capable of sinking most destroyers with one hit, as well as crippling, if not outright destroying cruisers. The torpedo reload feature allows you to carry an extra set of torpedoes in Realistic Battles. In Arcade Battles, they will allow you to fire your second spread of torpedoes faster.

Due to their extreme range, high damage and fast speeds, the torpedoes are by far the most valuable weapons on the Yuudachi.

The warship is equipped with a few depth charge launchers on the ship's stern. Due to the lack of submarines in the game, these weapons are not useful as they require you to get extremely close to an enemy to utilize them. At these ranges, conventional gunfire and torpedoes are more effective.

Since the ship is revolved mainly around its torpedoes, the effectiveness of the ship is dependant on the map. The Yuudachi excels in long range maps with little to no cover. This combination allows the Yuudachi to stay at long range, far away from most threats, while being able to launch torpedoes that can travel across the entire map.

The ship especially excels in Conquest gamemodes for this reason. Alternatively, it can be a strong ship for the Encounter gamemode, since the torpedoes will allow the Yuudachi to attack the enemy convoy from long range, often from the start of a battle.

Usage of this ship will mostly to be slinging torpedoes from a long range. In Arcade battles, you can fire off as many as you want thanks to unlimited amount of torpedoes. Try to target large groups of ships and fire at a relative average of their heading. It is also a good idea to fire torpedoes at an area that you'd predict multiple ships would pass through, such as choke points. This will allow you to score multiple kills without firing a single shot from your artillery. In Realistic battles, you are limited to only 16 torpedoes so you have to play more conservatively and to release your torpedoes more carefully and at more worthy targets. The Yuudachi is still capable of fighting other ships in an artillery battle, but due to the cannons' low fire rate, you will either need support or have your enemy distracted to win against more modern destroyers. Being a destroyer, the ship is also good at dealing with enemy gunboats and frigates, as you will outgun them at range.

The Yūdachi is one of the Shiratsuyu-class destroyers designed with consideration in the restrictions of the London Naval Treaty in place during the period of 1933-1937. All ten destroyers of this class had histories replete with adventure and combat. They were active in Japan's naval war in the Pacific ocean, the conquests in the Philippines and Indonesia, and the battles of Midway and Guadalcanal.

Especially noteworthy is the Yūdachi's final battle in November of 1942, when, after a nocturnal assault, the small ship found herself at the head of a large squadron that had literally collided head first with American ships defending the Solomon Islands. The American formation was thrown into chaos by this unexpected encounter between fleets. Ships from the opposing sides began to manoeuvre, changed course, and eventually became inextricably intermingled. This led to a horrific 40-minute close combat, in which the Yūdachi found herself behind the enemy front line. Seeing that the squadron's flagship, the battleship Hiei, was taking heavy fire, the commander of the Yūdachi steered his ship into the thickest part of the battle. The destroyer wound up between two ships, both of which attacked her at once: the USS Juneau, a light cruiser, and the USS Aaron Ward, a destroyer. Taking hit after hit, the Yūdachi tried to torpedo the Juneau. The next torpedo volley hit the USS Portland, the hull of which was massively breached as a result. Parts of the damaged aft section caused a "bump steer," and the ship could only move in circles until the end of the battle. Unceasingly firing her artillery at the enemy ships, the Yūdachi mistook the destroyer USS Sterett for a friendly vessel, where she paid for her mistake – the Sterett disabled the Japanese ship's powertrain with a torpedo volley, immobilising the Yūdachi where surviving crew members were evacuated. It wasn't until the following morning that the heavy cruiser the USS Portland, which had been hit by the little destroyer, sank the brave ship with six volleys.