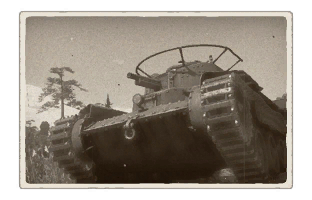 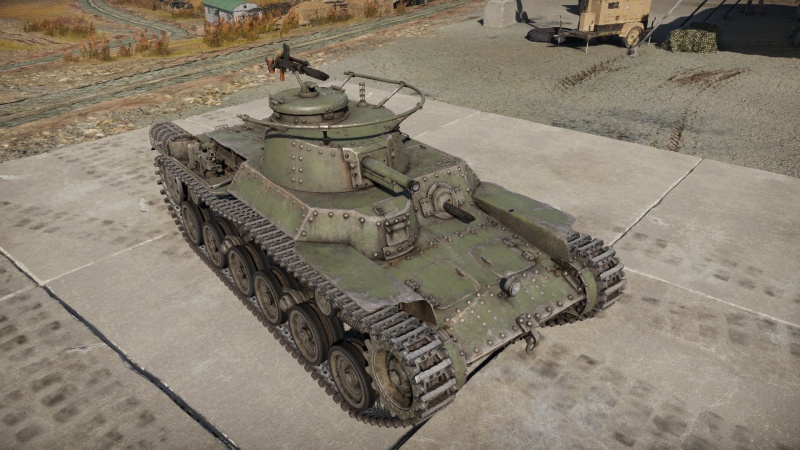 The Type 97 Chi-Ha is a rather average medium tank, with poor armour and a low-velocity gun with less penetration than the T-26's 45 mm. It does have good post-penetration damage, great gun depression, decent mobility, and its shoulder-stock stabilizer allows for accurate firing at slow speeds. Overall, it is a tank with a lot of weaknesses but a good potential if used right.

The armour of the Chi-Ha is light (35 mm max) but its complex layout makes it effective against weak guns (i.e. early French), weak shells (low-calibre HE), and in long-range engagements.

Armed with a low-velocity gun that requires good leading, the Chi-Ha nevertheless has a fast reload, and a great gun depression angle that allows it to fire from ridges, and its shoulder-stock stabilizer allows it to fire on the move, or more importantly keep the gun on target when braking, which is especially useful due to the low penetration of the shells.

The Type 3 HEAT shell should be the main shell for tank combat, It has more penetration that is kept over longer ranges and has a higher explosive mass. 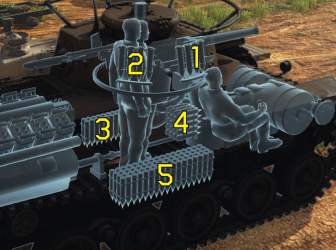 Ammo racks of the Chi-Ha (identical).

The Chi-Ha has a 7.7 mm Type 97 machine gun mounted on the left side of the hull, and another on the turret roof, though they cannot be used if the there are only 2 crew remaining. While they have a lot of ammunition, this machine gun is just simply not good enough. The rate of fire is below average, the penetration is bad, and there are only about 25 bullets in each magazine, making it impossible to provide a continuous machine-gun fire. The one things these machine guns can do is to incapacitate the fully exposed crews on some vehicles, as even a bit of armour might block out the weak bullets. The roof mounted gun can ward off some low-flying strafing planes but it is still inferior comparing to other machine guns like the American M1919 or M2HB.

The Chi-Ha is one of the most interesting Rank I Chinese tanks to play as it has little to no armour, a shot-put-like muzzle velocity and looks like a bus in some sense as to how long it is.

However, there is a way to play this tank despite all the negatives to this tank and to play it to the best of its abilities, one can play it as a support tank in every way (apart from long distance as the rounds drop like a brick after 500 m). Stay close to teammates and always play sneaky as the Chi-Ha can be easily one-shotted by everything like all Japanese tanks in this Rank.

But if facing a heavy tank or medium tank of early Rank II are very hard to versus from head-on and the fact that the 57 mm APHE rounds lack penetration to destroy it from the front. So the best option is to go up behind it or attack from the side to destroy them. Another problem that shows itself strongly in close quarter fights is that the Chi-Ha has a hand-cranked turret and turning the tank is painful at best.

So it is best to plan ahead before attacking, think where the enemy may be and find a place to hide the bulky tank from the enemy and wait for the enemy to come to the firing range. The Type 3 HEAT shell changes this. With 55 mm of penetration, the tank is capable of penetrating tanks that it previously couldn't - which is most tanks at rank I and II. In addition to this, the Type 3 HEAT has the potential to destroy lightly armoured and open-topped vehicles like LVTs or the Sturmpanzer with overpressure. Use the protection analysis feature to figure out which tanks you can and can't get through, and adapt your playstyle accordingly when those vehicles are encountered. Now, this is somewhat important "Don't look for the enemy, let the enemy look for the Chi-Ha." Of course, the Chi-Ha could still go look for the enemy, but always be on alert and make sure to have a friend for firing support.

Japanese tanks like the Chi-Ha, captured by Soviet troops during the Manchurian campaign, given to the Chinese Communists, and others captured from the surrendering Japanese by the Chinese Nationalists, were used in the Chinese Civil War by both sides. After the war, the victorious Chinese Communists kept the Japanese tanks in their inventory, where they were used in the 1950 victory parade, until they were phased out with more modern Soviet tanks during the 1950s.