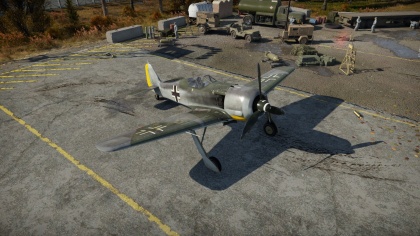 The A-4 in Arcade is a punishing Boom & Zoom fighter. The armament is fantastic, climb rate top par (rivalled by the Bf 109 F-4), and dive speed/top-speed is very good. Use this to an advantage. As characteristic of the Focke Wulfs, the sustained turn rate and radius is extremely slow and large, respectively. Turning is not recommended at all with the Fw 190.

This should not discourage you from seizing opportunities. A Fw 190 A-4 in a balanced furball can be devastating, when it acts as a wingman, keeping other fighters from getting on your team's tails. The enemy fighters are less concerned with evading, giving you the time to line them up. As soon as the amount of planes tips in the enemies' favour, it's time for you to make a quick disappearance, as planes actively trying to get on your tail will almost always get there.

Armament is fantastic, too. Four 20 mm cannons are more than enough to rip any plane to shreds. Firepower is only rivalled by other twin-engine fighters.

The Fw 190A-4, as all the planes in this line, are some of the best Boom & Zoomers in the game and should be flown exclusively in this style. But like the Fw 190 A-1 it is the more manoeuvrable in the house of Focke-Wulf. The performance at high speeds is excellent, as is their dive and zoom characteristics. Do not ever engage this aircraft in a turn fight as this will most likely end badly. Instead, fight only in the vertical. Try to have an altitude, or speed advantage over your opponents (by climbing to the side at the start of the battle and then enter the highest battle you see). But you can still win fights when you are lower in energy than your foe.

In the defensive, you can often just dive away from planes, such as Spitfires and La-5s, but you need at a decent altitude to gain top-speed, so do not be too quick to dive after an enemy, if they fly below your plane. Unless you are higher than everybody else, or alone. Just be sure than to have the time to regain the lost altitude.

In a dive, the 190 can, due to its short wings, pull quite some stunts to either lose the hunter or even make him lose his own wings! This is the favourable strategy against La-5s, Yaks & Spitfires who have due to their low wing-loading (and partly wooden wings for the Russians), less resistance against high G manoeuvres. Again be sure to regain your energy by a zoom-climb. Just look out while doing so, many pilots die as they do not notice a second enemy aircraft approaching. German proverb: "Wenn Zwei sich streiten, freut sich der Dritte." (German for "When two quarrel, the third will reap the success.") Of course, this could also be you.

The best tactic for this plane: is Boom and Zoom Boom & Zoom meaning it is better as an energy fighter (Boom and Zoom or keeping its energy up instead of turn fighting). Boom and zooming is a tactic that takes all of your potential energy and turn it into kinetic energy, as you pull up it turns back into potential energy.

A Tailing Boom & Zoom is when the pilot Boom or Dives to the target and tail him for 2-4 seconds. The benefits of doing this are players get a longer time to aim and a better chance of shooting them down, but it comes with a cost you will have less energy to climb back up, and you are more of an easy target for an enemy who came to help their, teammate. There are dangerous parts to doing this though. If you stick on your target too long you will lose too much energy and can't climb back up to Altitude. If this happens to your teammates the enemy has the advantage now. Turning will make your problem worse and makes pilots and "easy" kill to the enemy.

How to engage an enemy if he is going to Boom & Zoom you
If you see an enemy who is about to use the Boom & Zoom tactic on you have some options.

If you are at a high energy state best move is to turn towards him throwing off his aim due and going head on with him. another one is if you are at a low energy state best move is to turn under him. this will force him to pull up or he/she will lose all of their energy. Each of these moves can save your life in a dangerous situation of an encounter with a Boom & Zoom fighters, but your best bet is to turn in him if you can