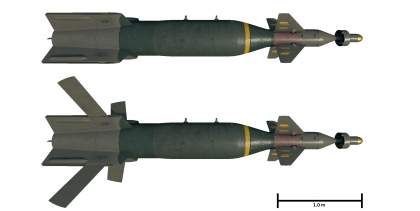 The Mk.13 Paveway II has a higher TNT equivalent than the standard 1,000 lb bomb found on most Post-War British aircraft, the G.P. Mk.I (1,000 lb) (288 kg vs 219 kg). That amount of explosive filler is usually more than enough to kill whatever target you are trying to hit with a single bomb (with the exception of some large ships).

The weapons most comparable to the M.13 Paveway II are the French BGL-400 and BGL-1000, those being the only other laser-guided bombs in the game at the time of its introduction. The 546 kg Mk.13 compares favourably to the smaller 400 kg BGL-400, with it having 180 kg of RDX (288 kg TNT equivalent) compared to the 167 kg warhead of the BGL-400. This gives the Mk.13 a 72% increase in TNT equivalent over the BGL-400, for only a 36.5% increase in overall mass. The only advantage the BGL-400 has over the Mk.13 is its smaller overall weight giving it slightly better gliding range in the air, and reducing its impact on aircraft performance. Compared to the 970 kg BGL-1000 the Mk.13 is obviously a smaller bomb with significantly less explosive power (288 kg vs 500 kg TNT equivalent). The increased mass and drag of the of the BGL-100 does however give it worse gliding performance than the Mk.13, reducing its range.

Due to the increased size of the Mk.13 Paveway II over unguided 1,000 lb bombs you can only carry a more limited number of them (2 in the case of the Jaguar GR.1A), for this reason you need to consider whether you need the guidance functions provided by the bombs or if unguided bombs will be a better choice. If you are attacking stationary targets (bases, pillboxes, etc.) then unguided bombs with CCIP will almost certainly be a better choice, laser guidance will be of very limited use in this situation and you can carry a greater number of conventional bombs.

Where the Mk.13 comes in handy is when you need to hit moving targets i.e. tanks in ground battles; the increased accuracy (and other benefits) of the Mk.13 in this case is likely to outsight the increased payload of carrying conventional bombs. Another benefit is that you can move the laser designator to a different target while the bomb is in flight and the bomb will guide itself to the new target (provided it has the aerodynamic capability to do so); this can be useful if for instance the tank you were originally targeting is killed. A final consideration for using the Mk.13 is that due to the canards and rear fins it is fitted with it can glide further than regular 1,000 lb bombs, coupled with the laser guidance this allows you to drop bombs from high altitude far away from the target, making it possible to avoid anti-aircraft fire.