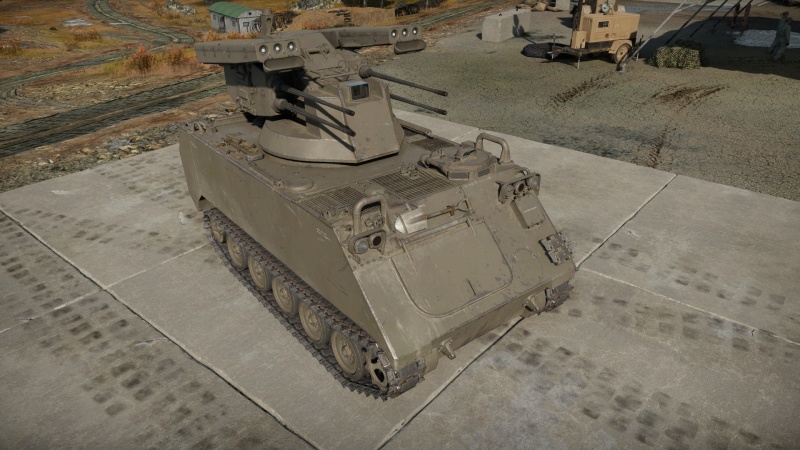 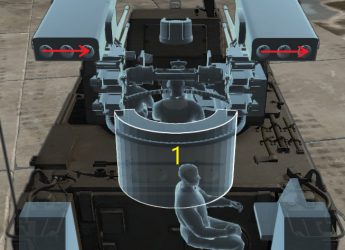 Ammo racks of the SIDAM 25 (Mistral)

The SIDAM also possesses 6 surface-to-air (SAM) launchers, for its Mistral missiles. These can be guided by the Optical tracking system onto the target and have an approximate effective range of 4 km. However jets will most likely to evade the missiles if fired from this range, so it is suggested that you wait to fire these at a closer range than 4 km where it will be more difficult for them to react and evade.

Ammo racks of the SIDAM 25 (Mistral)

The SIDAM 25 can be quite deadly when used right, players who have unlocked this machine will get to experience for the first time in the tree, an anti-air vehicle with firepower that rivals or in some instances, is more effective than other nations counterparts. The best way to play with the SIDAM 25 is to play very defensively. Due to it being based on the widespread chassis known as the M113, the SIDAM sadly does not have the best performance on or off road, even a small incline will seriously impact your overall mobility when using the vehicle. It is best to stick to flat ground where your vehicle can be much easier to control. The M113 also does not have the best survivability, so in that the SIDAM also sadly suffers in that area, so it is best to stick with more protected teammates or to flat out stay away from any type of enemy ground vehicles. Artillery will also be able to pressure damage you so in that case you should try your best to move away and avoid getting hit by it in the first place.

In case any vehicles breach your defenses you do have access to a small amount of APDS rounds, they might be able to deal with lightly armoured vehicles, and for the more heavier and protected vehicles, the APDS will at times penetrate and damage enemy tanks. The SIDAM 25's APDS can penetrate up to 81 mm of armour. Do keep in mind that the APDS is a tier 3 modification so you'll have to research it before having access to it. Due to the very low amount you have access to it is highly advised you use it strictly only for self defense, going on the attack with APDS will not usually work out for you, especially on the SIDAM considering the factors mentioned earlier: being slow, and not having very good mobility, not being very survivable, and overall being a very big target are all downsides for the SIDAM 25. You can negate the APDS shortage by being close to a capture point, as not only will it replenish your main ammunition to keep you focused on shooting down air targets, but it will allow you to be a bit more wild with the APDS, as you'll be able to quickly replenish it easily, to allow you to last longer on the battlefield. So overall for the SIDAM, the best tactic is to try your best to remain or at least be near a capture point.

In the anti-air sector, the SIDAM 25 sadly does not have access to a radar, unlike other nations' counterparts at the battle rating. What you do have access to however is an optronic tracking system, which allows targets to be tracked, and provides one of the most most accurate lead indicators for any vehicle. This will allow you to predict flight paths of any enemy air vehicles you'll be facing. Another great thing about the optronic system, is that it cannot be detected by radar warning receivers on enemy aircraft, making it much easier for you to target them, and hopefully take them out with a quick barrage of you main gun. Speaking of which, the SIDAM's main armament consists of 4 x 25 mm guns, they have a combined firepower of 2200 rounds per minute; more than enough to deal with most of the aircraft you'll face. You also have access to a two-plane stabilizer, which will furthermore aid you in firefights against both ground and air vehicles.

In terms of the Matra Mistral launchers it has access to, although at times these can prove to be a great asset, they also positioned on the top of the turret, leaving them very exposed. Much like most anti-aircraft and missile vehicles, if these missiles are hit while still in the launchers, they will most likely detonate and cause damage to the vehicle. They are best used when low flying aircraft are inbound, or when they have just pulled up from a dive. Do not attempt to try and take out fast moving planes as they will prove very difficult for the missiles to track. Also considering it only has a maximum range of 5.5 km, other similar missile SPAAs will still outperform you from long ranges.

The SIDAM 25 was made during the Cold War (the SIDAM system started in about 1980 and first two prototypes were trialed in 1983), Italy wanted to find a suitable anti-air vehicle that would be on par with the Soviet Union's and Warsaw Pact, as well as NATO vehicles such as the German Gepard and the American M163 VADS. Its primary goal was to take out out low flying aircraft but it was provided a secondary capability against lightly armoured targets thanks to the types of ammunition it had access to, such as APDS, HEI and SAPHEI. There had been some contenders on what the next anti air vehicle would be, but the Italian Ministry of defense ended up supporting the SIDAM 25 and started to place orders for the vehicle.

The SIDAM 25 would be based on the American M113 chassis then built under license, mainly it was chosen as it had local production and allowed for a cheap supply of parts and easy maintenance and training. However, to carry the impressive quad system, a large array of modifications had to be carried out including the removal of the single fuel tank replaced with twin tanks either side of the new engine and updated suspension to cope with the increased weight. Although to the outsiders it may look like a decent SPAA (which it is in a way, on a good day), but the actual production version lacked radar and any form of night vision/thermal vision. The SIDAM 25 was advertised at the time to be able to utilize night vision and thermal vision, however there was an issue, cost. The SIDAM 25 project ended up costing Italy too much, so they had to remove things from the actual prototypes such as night vision and the thermal imaging, it ended up having an entirely different turret (the one currently in game). In retrospect Italy could've acquired the OTOMATIC with that money, which although it would lead to less units, it would've been great if they went for quality over quantity.

Sadly the SIDAM 25 lived a short life, in total 276 of such systems were produced from 1985, they'd slowly be taken out of active service and put in storage. Most of them have been used for its main armament, and installed onto the Italian army 'Freccia IFV' which uses the same 25 mm the SIDAM once used. The SIDAM 25 would only ever be exported to a private military collector in Belgium, in an estimated 40 units. There was also plans on installing the SIDAM quad mount on another OTO-Melara project, the C-13, however due to political reasons that would not end up happening. In terms of SIDAM upgrades, modernization plans for the SIDAM 25 were drawn up in late 1994. The Italian engineers proposed the up-arming of the vehicle with Matra Mistral surface-to-air missiles in order to give it better long-range capabilities and improve its performance as a whole. Sadly, the Mistral program which aimed to upgrade the Italian SIDAMs would not be picked up.