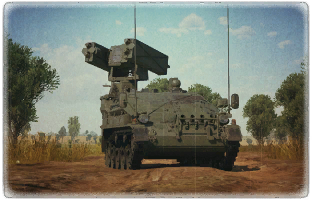 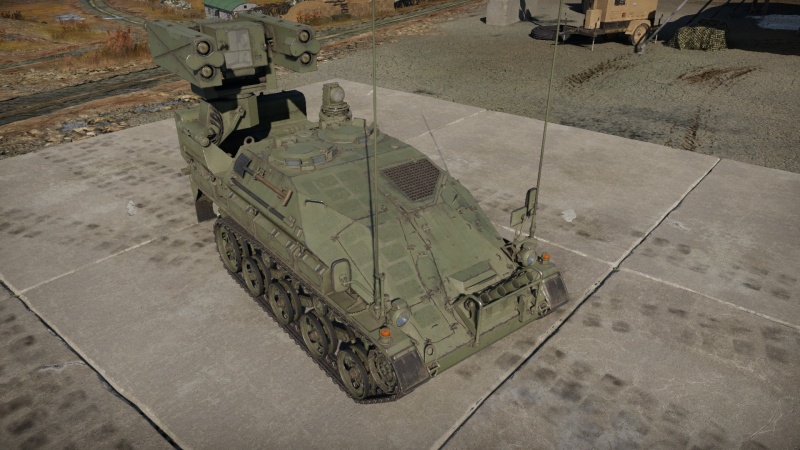 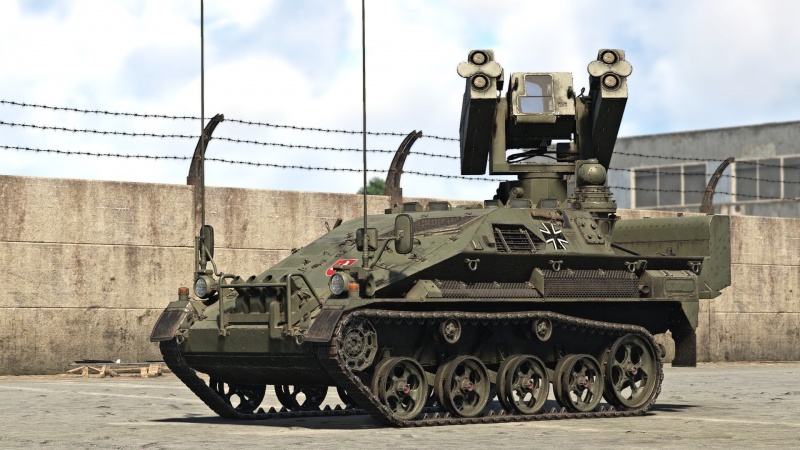 The Leichtes Flugabwehrsystem Ozelot is a rank VI German SPAA with a battle rating of 9.3 (AB/RB/SB). It was introduced in Update "Ground Breaking".

The armour is extremely thin and only serves to protect the vehicle from shell splinters and rifle-calibre machine guns. Anything with a calibre of 12.7 mm and larger will destroy this vehicle.

The Ozelot requires discipline to use efficiently. Care must be taken not to fire on enemies flying too close, otherwise the missile will not be able to turn quickly enough to hit the target. The Ozelot should be used in an open environment, as obstacles can interfere with the radar guidance of the missiles, or even get hit by the missiles themselves. Helicopters are this vehicle's main opponent.

Activate the missile seeker and point the blinking green circle at the helicopter. When it turns red, you can fire the missile that will guide itself to the target. Once the missile is fired, you can begin to engage a different target while the missile is still in the air. For very low flying helicopters, you need to aim above the target as much as possible (about half of the circle's diameter, doing more will prevent a lock) in order to prevent the missile from hitting the ground. It may be beneficial if you choose an elevated position like a pile of rubble or a hill to fire from.

Note that it is harder to lock helicopters on winter maps and one may struggle to lock an Mi-24 helicopter at 2.5 km, which may lead some players to preferring using a Gepard on these maps.

Engaging planes is more challenging due to the missile's low turning rate and energy retention. It is recommended to lock the target using your optical sensor or direct lock in the gunner's optics, but this is not required. As a rule of thumb for fast flying planes, aim as much as possible in front of where the plane is going to be and a little bit higher. Engaging a fast flying plane that is not flying towards you or away from you will usually cause the missile to miss. Experienced pilots will try to spot the white fume trail of the missile launch and will turn very hard, which is very likely to out-turn your missile. Since manoeuvring planes will lose energy, you can drain the energy/speed of the plane to a level where you can hit it with your 3rd or 4th missile. If you wait with the launch of the 4th missile until the plane is at 1.5 km, the plane cannot engage you after evading the last missile. However, if you fire your last missile in the magazine too early, they will use their guns to wipe you off the map. Unless you can replenish your missiles on a cap point, it may be more efficient to not fire at planes circling your position.

The Wiesel 2 entered service in 2001. This new vehicle was larger, faster, stronger, and more advanced than its predecessor. The Wiesel 2 was outfitted with a more advanced engine and fuel injector along with automatic transmission. The vehicle also saw an upgrade in armour, as it was slightly more advanced than the Wiesel 1's. Lastly the Wiesel 2 received an air conditioning system for the crew's comfort in the small tankette, and an integrated NBC protection system to ensure the crew's safety against nuclear and chemical threats.

Developed on the chassis of the Wiesel 2, the Ozelot was intended for light air defense in a range of up to 20 kilometers. This variant on the Wiesel 2 was created as a mobile air defense system armed with the leichtes Flugabwehrsystem (LeFlaSys). The Ozelot works alongside a secondary vehicle which contains guidance and radar systems called the "Reconnaissance, Command, and Fire Control Vehicle" (RCFCV), while the Ozelot itself is armed with the four missiles to eliminate the target. The RCFCV can command up to eight Ozelots on its own. It was later also fitted with a passive IRST system, allowing it to operate autonomously without an RCFCV if necesary. The Ozelot was deployed to many of the same missions as the Wiesel 1A4 such as Operation Essential Harvest in 2001 and the International Security Assistance Force (ISAF) in Afghanistan from 2001-2014.