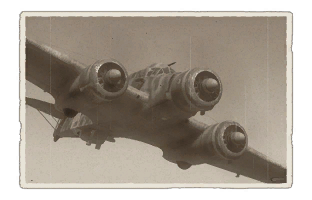 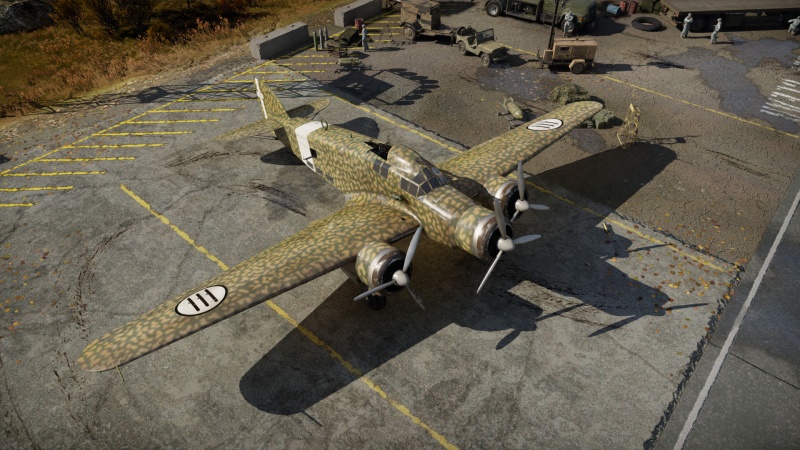 The S.M.79 Sparviero AS (1941) is a rank II Italian bomber with a battle rating of 2.3 (AB/RB/SB). It was introduced in Update 1.69 "Regia Aeronautica" alongside the initial Italian aviation tree.

The S.M.79 Sparviero AS (1941) is a later modification of the SM.79 bomber used in the North Africa campaign, AS stands for North Africa. It was used during the Africa campaign and was equipped with a sand filter on the carburetor air intake, the radiator was also extended so that the engines would not heat too much.

It is armed with 12.7 mm Breda-SAFAT defensive machine guns that can give a good hit against any fighter it faces, but you have to be precise to damage the enemies.

The pilot can also use a fixed 12.7 mm Breda that fires forward, this gun can be useful for destroying light vehicles and trucks that are often encountered in low-tier battles and can be used to shoot down other aircraft.

With the ability to carry 2 x 500 kg bombs, the SM.79 AS can destroy pillboxes and tanks with ease. This bomber can carry a torpedo you can use to destroy ships.

The S.M.79 AS can be outfitted with the following ordnance:

The S.M.79 AS is a mediocre bomber at its battle rating in air battles, though this variant can stay in WEP for longer and is good for a warm climate. At the beginning of the battle, go up to 3,000-4,500 m and go to destroy enemy bases. Whenever enemy fighters or other aircraft attack the S.M.79 AS, use your gunners to fight back against enemy aircraft, it is recommended to use the universal ammunition for the 12.7 mm Breda-SAFAT turret belt because it contains 2 API-T and 2 AP-I per belt. AP-I and API-T ammo is perfect for defeating enemy planes because it can knock out the enemy pilot or set fire to enemy planes. Meanwhile for the 7.7 mm Lewis machine gun, use universal ammo for the side turrets belt because it contains 1 Tracer and 3 AP-I rounds. When you are close to the enemy base, use your bomber sights to drop your bombs and then return to the airfield to reload your bombs.

You can use the S.M.79 AS in ground battles with the following payloads: 5 x 250 kg (Mod.28) or 2 x 500 kg (Type 28). After spawning with the S.M.79 AS, stay at an altitude of 900-1,500 m and use the bomber crosshairs to drop the bombs more accurately. The selected bombs in the payload are very good, so if your bombs get close to enemy medium and heavy tanks, they can be destroyed very easily.

Like any bomber in Arcade Battles, the S.M.79 AS is likely to be the first to be destroyed. Go up to 4,000-5,000 m and stay at that height and drop bombs onto enemy bases. Remember that the S.M.79 AS can be destroyed very easily by enemy planes, so be careful and maintain situational awareness to see if there are enemy planes coming.

Alessandro Marchettí was famous for creating record breaking and Schneider Trophy winning racing seaplanes, and was the Savoia (aka SIAI, Società Idrovolanti Alta Italia). In 1922, Marchettí joined Savoia to form one of the great aircraft companies in history, until merged in 1983. After the conclusion of the Schneider Trophy race (won by UK), the firm used its experience to build fast aircraft for civilian and military use.

You probably saw the very similar looking Italian SM.81 in game, which was a militarized version of the successful S.73. The SM.79 was new passenger version based on the platform of its predecessor; the most obvious difference was retractable landing gear. It was truly made first as a passenger version to compete with those being made by other countries. Needless to say, it immediately attracted attention of the Regina Italia and a bomber version was developed in parallel. For a few brief months it was considered the best transport and bomber in world and became a major point of pride in Fascist Italy and was sold to several countries in the years before WW2.

Unlike nearly every bomber in War Thunder (and even in WW2), it was built mainly of steel a wood. The fuselage was a common for time welded steel tube design, with entire rear half being covered in cloth and plywood. The crew area to nose was duralumin cladded (which is very similar to Hawker Hurricane’s construction). Most surprising the wings are completely wood! A major technical achievement for its size. During its production life several engines where tried, depending on power and reliability, one model even removing the nose engine.

To make the SM.79 fast the wings are shorter than typical for its weight. To compensate for higher clean stall speed a number of advanced high lift devices were used to reduce stall speed for landing, being Handley-Page leading extending slats and drooping ailerons (also called "flaperons") in conjunction with uncommon slotted flaps. After trying a few engines, the Alfa Romeo 126 was used on the prototypes for testing and the record breaking flights soon after. As with the SM.73 / S.81, once again the Italian military wanted a bomber version and laid out proposed additions.

The spacious cabin was easy to install a set of bomb racks, all bombs mounted vertically (not unusual for time). While the S.81 had the bomb aimers position just behind the nose-mounted engine, the SM.79 positioned it in a ventral "tub" well after of the bomb bay itself. Also unlike the S.81 this streamlined tub also became the location of the ventral defensive gun, usually a 12.7 mm Breda-SAFT MG instead of a turret. A streamlined dorsal mount was also installed for a rear firing 12.7 mm MG, and unusually for bombers a fixed, pilot fired forward mounted 12.7 mm MG, firing above the propeller disk. Both these streamlined protrusions could be closed to greatly minimize drag for a very high cruise speed, which the turreted S.81 could not. It was the prominent hump on its top that earned the nickname il gobbo maledetto ("damned hunchback"). Italy was open to export sales, and many countries purchased this top of line bomber to add to their forces.

From the high of the Spanish Civil War to the end of WW2, the Sparviero was the backbone of Italian bomber air forces and continued to do well over the vast stretches of the Mediterranean sea despite better allied defenses. Success was made despite high losses up to the Italian Armistice. They continued to be used in lesser roles on both sides of the conflict, and after the war were used for various duties by several nations for years later. Lebanon was the last operator who used them well in the 1950’s and are the last 2 remaining SM.79 in world.

The version was modified to mount a torpedo, but was little changed from earlier versions.