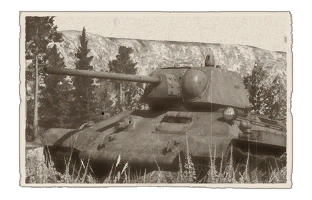 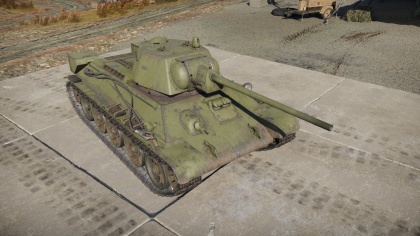 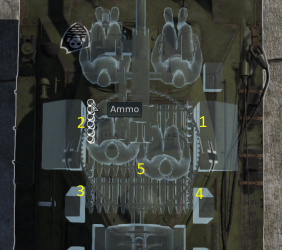 This tank is a brawler, suitable to fight in close range combat, especially the urban map. But thanks to the high velocity of 57mm gun (990m/s), it is possible to snipe enemy tank easily in long-range map.

The T-34-57 (1943) really shines in Realistic Battles. In open maps, use your good mobility to flank and catch unsuspecting enemies. Moving from cover to cover is essential, as your armour, although well sloped, will not be able to withstand most shells at this battle rating. Don't let the enemy catch you unangled, or you will be killed immediately. In urban maps, look around the streets (press and hold the button "c" to look around) before crossing. Your quick reload speed and high penetrating gun will allow you to react to surprise attacks around the corner. Although the 57mm gun has little post-penetration damage, it makes up for this in high penetration and a quick reload speed. The 57mm cannon has very good ballistics and penetration, and is good for medium to long range sniping.

The modernised T-34-57 tanks were not put into mass production, and after a few vehicles were produced, the decision was taken to stop manufacturing them. Three T-34-57s built using mass-produced T-34 Mod. 1942 tanks made by the Chelyabinsk factory were sent to the front to serve in the 100th Special Tank Division. The tanks were tested on the front from the 15th of August to the 5th of September, but did not excel in battle, so they were kept in reserve.