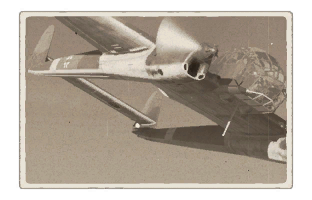 The Fw 189 A-1 is a gift rank I German bomber with a battle rating of 1.7 (AB/RB/SB). It was introduced during Update 1.61 "Road to Glory" in the "Operation S.U.M.M.E.R." event of 2016 that lasted from 22 July to 22 August after obtaining 18 pilot Marks of Distinction. It was next available in the 2017-18 Special Festive Quest from 22 December 2017 until 22 January 2018 that required 10 Christmas toys and also 500,000 Christmas lights accumulated between all players. It is currently rare vehicle and is obtainable through the Gaijin Marketplace.

The Fw 189 is best described as a multi-purpose heavy fighter. Thanks to the light airframe, large wingspan, and large elevator, the Fw 189 is an incredibly maneuverable plane, rivaling that of early rank Spitfires and Hurricanes. Thus, in war thunder, the Fw 189 fulfills the roles of a light bomber, ground attacker, heavy fighter, and reconnaissance in EC/ combined battles. It's extremely adaptive to whatever role you play as(Except for bombing bases), a rare trait in War Thunder.

You can either engage enemy bombers with regards to your bomber airspawn, or engage fighters which would still be below you when you reach them. At landing, forget about deploying your gear. Your plane will handle a soft belly landing even if heavily damaged, and it's faster than using the gear as the brakes are somewhat inadequate.

Around 1937, the German Air Ministry wanted a short-ranged, three-seated reconnaissance plane with great visibility act as an army co-operation aircraft. Two aircraft manufacturers wanted the contract: Arado and Focke-Wulf (Blohm & Voss participated but it was a private venture). The Fw 189 prototype had an unusual twin-boom twin engine design so that there will be no engine blocking the front of the cockpit which offered maximum visibility and good speed. It was powered by two Argus As 410 engines and utilized a heavily glazed "stepless" cockpit. Which is all glass and supporting frame to block vision, which is similar to cockpits found on late-war German bombers. It was extremely successful not only because it was fast, but also because it was an extremely maneuverable aircraft. One trick utilized when a fighter came to intercept it was to start turning in a tight circle, in which the pursuing fighter could not match. Later in the war, this aircraft was retrofitted for a variety of tasks which included light ground attack and a night fighter variant.