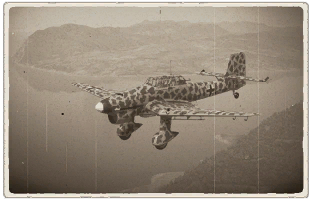 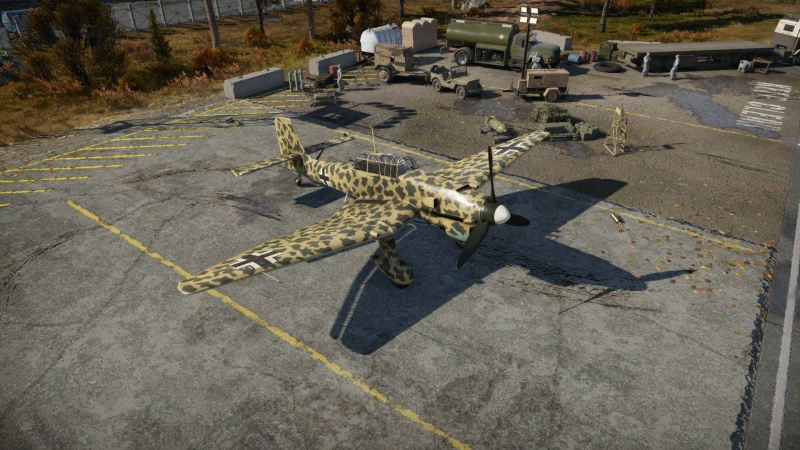 The main use of this plane is precision strikes on hard targets such as tanks and pillboxes, as well as providing ground support in ground battles. This is largely due to its spectacular dive-bombing accuracy and powerful payload. To perform an effective dive with this plane, at an altitude of at least 1,400 m, place your target at the bend in your wings, roll your upside-down and dive at an angle of 60-90 degrees, aiming your cross-hairs at or slightly in front of the target (leading with their speed). Drop throttle to 0% and deploy airbrakes (H key by default); you should keep a steady speed of 400 km/h. Release your bomb at 300 m from the target and you should score a direct, or near hit.

The armour of the Ju 87 R-2 is decent at this BR, although it is unlikely to stop real bullets and is only really effective at protecting against shrapnel. All of the important components, like the pilot and engine, are located in the front of the plane, which means that you should not expose the front unless absolutely necessary. Also, whereas the pilot actually has a decent 8 mm armour plate behind him, the gunner only has a 5 mm one which won't stop pretty much anything except glancing bullets and small shrapnel fragments. Adding to that, the gunner is usually the one facing enemy planes, so he will most likely get knocked out early in the fight, leaving you without much protection against enemies.

In this aircraft, all the bomb loads can be equipped from the start, with no need to research any pylon modules. So, it is advisable to acquire either 500 kg bombs or 1,000 kg bombs from the start. However, before using the 1,000 kg bomb it is best to research modules that influence climb rate heavily, particularly engine upgrades. Without these, the larger bomb degrades performance too heavily, so it is recommended to use the 500 kg bombs first, which are still quite good and can easily destroy anything at this plane's BR. The gun upgrades are less needed, as this aircraft does not rely too much on their damage output, however they can still be used for defending yourself against enemy planes and strafing soft-skinned targets on the ground like AAA and armoured cars.

The Ju 87 R-2 can be outfitted with the following ordnance:

In Arcade Battles you should concentrate on killing tanks and pillboxes first (if any) with your bombs, and use your offensive machine guns to kill soft targets like armoured cars, artillery, howitzers and AA. In this mode, you won't need your air brakes since you can't break your wings and it's easy to pull up from a fast dive attack, and its recommended that you keep as much of your speed up from the dives so you are harder to intercept by enemy aircraft. Another viable option on maps with light vehicles is to stay at altitude, dive, drop your 1,000 kg bomb, and climb again, circling until you get another bomb. This work most effectively on maps with groups of armoured cars that are clustered, bot in a line.

In Realistic Battles, you should keep your altitude, and look for tank columns to attack. Once you've chosen which tank column you wish to attack(I recommend some ground targets as far from the battlefield or enemy airfield as possible, so you are less likely to be intercepted) . Once you are right over your intended target, set your throttle to 0% and point your nose at the at the tank you want to destroy (since you have no bombsight, there will not be a bomb-drop indicator like in Arcade, and you will have to guess where the bombs will drop) once you are nearing your target, you will have to deploy your air-brakes or you won't be able to pull up at high speeds. (you can tell when you are reaching a high speed with the sounds that the air and wings make) Once you drop your bomb(s) point your nose up to pull up. At this point you may or may not have killed your intended target, but it is OK if you didn't you will get better at it with more practice, but you still have your offensive armament to kill soft targets like AA or you can engage enemy fighters that are nearby (which is very likely).

Dogfighting in RB with a Ju 87 is a very difficult task if the enemy knows your disadvantages and uses them to his own advantage. It is recommended that you avoid doing head-on attacks a much as possible, as you don't have the armament to risk it. It is also recommended that you stay low and slow in a combat situation with enemy aircraft (because of control surface lock-up at high speeds) and try to get the enemy to engage in a turnfight. If he falls for your turnfight, you should end up on his 6 o'clock in 3-5 turns on most enemies, it really depends on if its a British, American or Soviet plane, British being generally the better turnfighter. If he doesn't fall for your turnfight, you are most likely going to go down, as this plane is not a fighter plane.

When returning to base landing and takeoff is simple, and use of the air brakes will help if you came in to fast to land. But you may be coming back on a dead or damaged engine (The Ju 87's engine is prone to damage and overheat)and it would help if you find the nearest friendly airfield and get there as soon as possible.

Because of their low speed, permanent landing gear and reasonable durability, all the Ju 87s are quite good for capturing airfields in the Airfield Domination mode.

In ground RBs, the Ju 87 R-2 has a great advantage: the large 1,000 kg bomb. Almost all enemy tanks at a similar BR won't survive such an explosion, or they will have critical damages for sure. Remember to set the time fuse at 3 seconds: if longer the enemy may escape, if shorter your plane might be damaged by the explosion as well. Dive at a target, extend airbrake and gather speed up around 450 km/h (if too fast, cut throttle). Zoom in on the target and when it is twice as big as the mouse cursor, place the target closer to the cockpit than to the cursor, and release the bomb. For the 1 x 250 kg or 1 x 500 kg setup, the aiming is similar, but place the target closer to the cursor for the 250 kg, and for the 500 kg, between the cockpit and the cursor. Follow all the instructions you have for RBs, and return to the airfield as soon as possible because with the slow speed, the Ju 87 is a perfect target for AA vehicles.