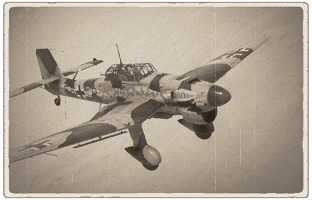 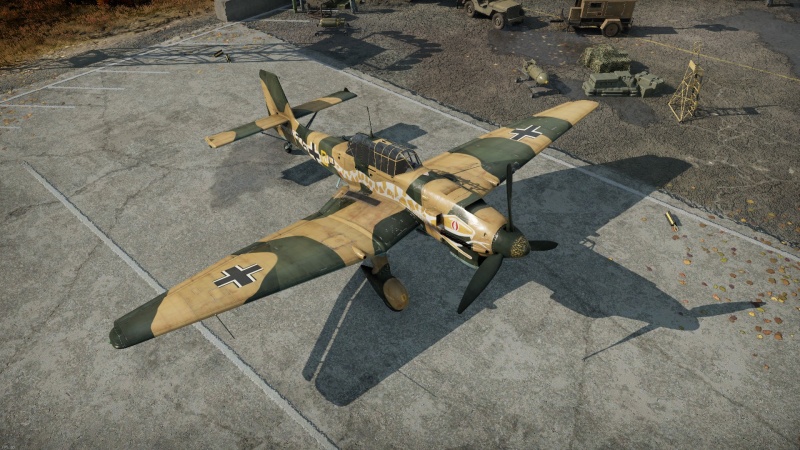 The Ju 87 R-2 Libya is a premium rank I German bomber with a battle rating of 1.3 (AB/RB/SB). It was introduced in Update "Danger Zone".

It is identical to the standard Ju 87 R-2 except for its unique desert camo with a snake motif. 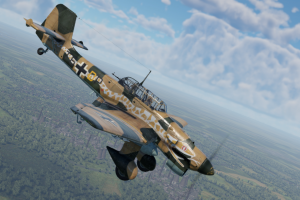 There is no protection on the engine or cooling systems. Since it is a dive bomber, the plane is especially vulnerable to flak and even small calibre AA fire. Due to the increased amount of drag on the plane at lower altitudes, it is best to make sure you do not dive too close to the ground when dive-bombing because if penetrated, your engine will overheat and die quickly from overheating before being able to return to base for repairs. The fuel tanks are located in the wings in close proximity to the fuselage, which makes them vulnerable to any explosive shrapnel from dropped bombs when flying level or pulling out of a dive.

The different choices of ammunition types are as follows:

The Ju 87 R-2 Libya can be outfitted with the following ordnance:

The 1,000 kg bomb is highly effective at this BR, especially in Simulator battles. Make sure to set a long enough fuse for bombing to reduce the chance of fuel leaks. The 1,000 kg bomb may destroy a base in one hit at its BR.

The different choices of ammunition are as follows:

The Ju 87 R-2 Libya belonged to St.G 2 and was used off the Libyan coast in Timimi to attack Allied ships in the Mediterranean. It was flown by Lieutenant Hubert Pölz of 6./St.G 2 and participated in the sinking of HMS Auckland off Tobruk in June 1941. The markings designate the plane as the fourth plane in the sixth Staffel of the second Gruppe in Sturzkampfgeschwader 2.