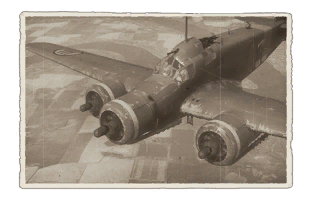 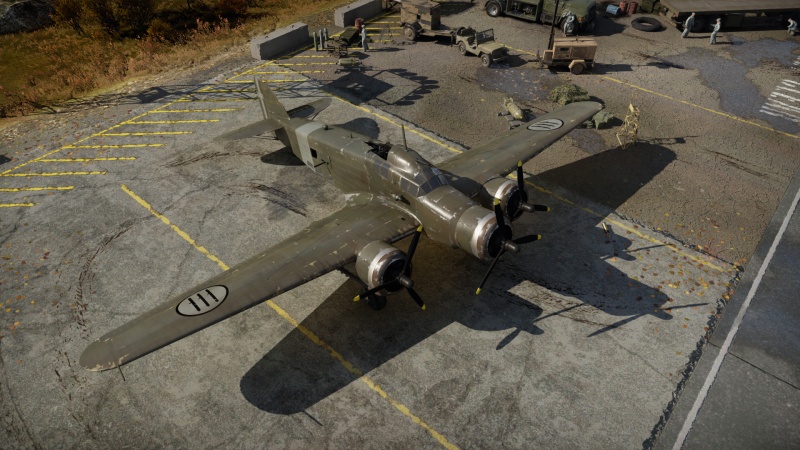 The ▀S.M.79 Sparviero bis/T.M (1943) is a gift rank II German bomber with a battle rating of 2.3 (AB/RB/SB). It has been in the game since the start of the Open Beta Test prior to Update 1.27 in the German aviation tree. In Update 1.69 "Regia Aeronautica", the S.M.79, as well as the other Italian planes in the German tree, were moved to the new Italian tree.

The S.M.79 bis/T.M (Germany) can be outfitted with the following ordnance:

On September 8, 1943, Italy surrendered and split in half; in the north, the Germans established a puppet Italian Social Republic (RSI), while the British and Americans controlled the south.

The bulk of SM.79 aircraft remained in the north. In addition, the aircraft factories were located there, as well as a stock of components and unfinished SM.79bis airframes, so production of the planes continued. Aircraft released from 1943 to 44 differed from the first series of planes in a number of ways.

On these planes, in place of the two 7.7-mm Breda SAFAT machine guns were installed two large 12.7-mm Breda SAFAT machine guns with 350 rounds per gun, and the hatches through which they fired were glazed. On one SM.79bis, the nose machine gun (which was used to suppress anti-aircraft ships), was replaced by a 20-mm cannon. Among the instruments added to the plane were a radio altimeter, a gyrocompass, and an autopilot.

The first sortie flown by the Republic's SM.79bis was on March 10 and 13, 1944, against American ships off of the Anzio beachhead. Italian torpedo bombers fought for the Germans until the beginning of 1945. Their final victory was against a steamer with a water displacement of 5000 tons which was sunk on January 5, 1945 in the Adriatic Sea.

The SM.79s which remained in the south of Italy passed under the control of the Allied Air Forces' Italian allies and were used for transportation purposes. In December, 1944, a third transport regiment equipped with these machines appeared on the front. The planes not only carried passengers and cargo, but also dropped leaflets and performed special missions behind the front line.

After the war, almost all of the surviving Sparviero planes in Italy were converted into transport aircraft. They were used as military air couriers, transporting government officials and other important passengers around Italy. Some were used as training planes. By 1952, all of the remaining SM.79s had been scrapped.

A total of 1458 SM.79s were built (including about 150 SM.79bis), more than all other Italian multi-engined bombers combined.