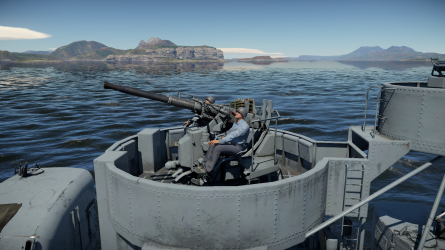 The Bofors L/60 Mark 1 is a naval anti-aircraft twin mounting that consists of two water-cooled, US-produced Bofors 40 mm L/60 guns. The Bofors 40 mm L/60, also known as the "Bofors L/60", the "Bofors gun", or simply "the Bofors", was a highly successful Swedish anti-aircraft gun design of the interwar period and was widely used during the Second World War by both sides and in all theatres and remained in service long after the end of WWII.

The Bofors L/60 Mark 1 has a barrel diameter of 40 mm and has a barrel length of 2.25 m. It has a magazine size of 4 rounds per gun and has a rate of fire of 156 rounds per minute, though firing for too long will jam the gun.

One of the best medium-range anti-aircraft cannons in the game, the Bofors L/60 Mark 1 provides very good AA coverage for any ship that it's mounted on. With a 0.0986 kg TNT equivalent explosive charge in each HE round, any hit on an enemy aircraft will usually result in critical damage, if not a kill. The rounds that this gun fires have an above-average muzzle velocity and projectile mass, resulting in a much further effective range than guns of a similar calibre: laterally (i.e. targeting surface targets), the maximum range is about 3.25 km. This is most prevalent on patrol boats and other smaller vessels because it allows those equipped with the Bofors L/60 Mark 1 to knock out enemies safely outside the maximum range of almost every other autocannon (most notably, the German 2 cm/65 C/38, which have a maximum range of roughly 2 km).

The main ammunition choice to take should be 40 mm HE clips since it contains the highest ratio of HE to AP rounds. On patrol boats and other smaller vessels though, a small amount of 40 mm AP clips should also be taken to deal with any armoured targets that may come up. With a maximum penetration of 80 mm, the AP rounds trivialize most armour that they come across. AP can also be used when an enemy is approaching straight on, in which case an already destroyed bow compartment will tank most HE damage; the AP rounds can pass through and deal damage to the rear of the boat. On destroyers though, there is no reason at all to take the AP clips. While the AP rounds do have a very gun penetration for its calibre, armoured targets are more effectively dealt with using the destroyer's main armament anyway. With the 40 mm HE clips, the Bofors L/60 Mark 1 will have the highest effectiveness against its intended targets: aircraft and small boats.

The twin guns were essentially two mirrored single guns strapped together — the left and right guns were designated 40 mm/56 Mark 1 and Mark 2 respectively — and were what the Mark 1 Twin mount used. The guns were mounted in the center of the mount with two crewmen seated on either side. The crewman on the right-hand side of the guns was the gun trainer; he trained the guns horizontally by turning a crank. The crewman on the left-hand side was the gun pointer; he elevated the guns in the same manner and also fired them by pressing a foot pedal. The guns could be toggled between single-fire and full-automatic modes with a switch on the pointer's side. In full-automatic mode, the guns could fire at around 120 rounds per minute. The mount was electrically driven and could train at a rate of 26°/s and could elevate at a rate of 24°/s between -15° and 90°. The mount could also be remotely controlled by a Mark 51 fire control system crewed by its own pointer and range setter. Behind the gun pointer and trainer was a platform on which stood the mount captain and two 1st loaders, one for each gun. In combat, a line of ammunition passers formed to pass ammunition from the storage along to the 1st loaders. Ammunition was produced in 4-round clips with both HE and AP clips, as well as self-destructing variants — set to explode between 4,000 and 5,000 yds. (3,700 - 4,570 m) — of both, being produced. Ammunition was loaded into the top of each gun into their ammunition trays. Spent casings were ejected out the rear of each gun and sent down chutes towards the front of the gun, where they were flung safely away from the crew. The guns of the Mark 1 Twin mount were water-cooled and had water jackets, the coolant tanks and pumps for which were located at the rear of the mount. Altogether, the Mark 1 Twin mount could weigh up to 13,000 lbs. (5,897 kg).

The Mark 1 Twin mount began production early 1942 and entered service in July 1942, mounted on the destroyer USS Coghlan (DD-606). The USN standard medium anti-aircraft gun at the time was the 1.1"/75 "Chicago Piano" gun was unreliable and largely inadequate as an AA gun. The Bofors gun was quickly adopted as the new standard medium AA gun and began to be mounted on virtually every ship in the US Navy. The United States also supplied Britain, the USSR, and several other nations with Bofors guns as part of the Lend-Lease policy. In 1945 though, the Bofors gun, too, was determined by the US Navy to be insufficient and development for a replacement, the 3"/50 gun, was started. However, the development was long and the replacement program was slow. As a result, the Bofors gun remained in well into the 1970s. Over the course of World War II, almost 10,000 Mark 1 Twin mounts were produced.