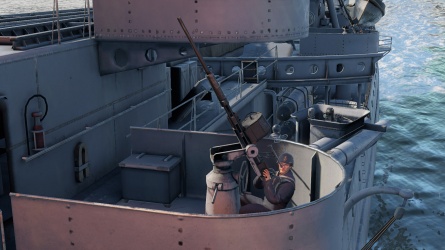 The Oerlikon 3S is a powerful and effective 20 mm autocannon that served on all sides during World War II. The origin of the Oerlikon goes back to World War I with the Becker M2 20x70RBmm cannon, itself an upgrade to a 19 mm design that was refined by Spandau Arsenal. Seeing limited use on aircraft of the Luftstreitkräfte (Imperial German Air Force), Becker used an advanced primer ignition blowback action to fire at 300 rounds per minute. Germany lost World War I, however, and the terms of the Treaty of Versailles meant that they couldn't continue production of it. The design was sold to the Swiss firm SEMAG in 1919 which produced the heavier 20x100RBmm SEMAG L firing at a rate of 350 rpm, until the firm went under in 1924.

After this event, Oerlikon bought all the rights, parts, and engineers and continued production as the Oerlikon L and in 1927 added the Oerlikon S to their production line. The Oerlikon S fired an even larger 20x110RBmm cartridge at a much higher muzzle velocity but at the cost of a slower rate of fire of 280 rpm. The Oerlikon 3S was a further improved version of the Oerlikon S. The Italians purchased a small number of these guns in 1941. While superior to their own domestically made 20 mm cannons the 20 mm/65 Breda and 20 mm/70 Scotti-Isotta Fraschini mod.1939, it was not made the standard issue naval anti-aircraft gun during World War II.