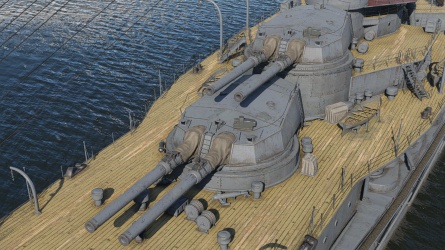 The 36 cm/45 Type 41 is a Japanese 356 mm naval cannon. It is a very capable naval weapon in War Thunder, often able to take down enemy destroyers or light cruisers with a single salvo (even if only by flooding). Even the default SAP shells will penetrate everything but the heaviest armour on battleships and battlecruisers.

Like all high-calibre guns, the Type 41 is best used against large, predictable targets, as the base 39-second reload time (decreased down to 30 seconds with crew skills and qualifications) makes it tricky to correct for maneuvering targets, such as destroyers or coastal vessels. These are better left for the secondary, or even anti-air guns.

The 36 cm/45 Type 41 is the main armament found on a battleship and battlecruisers, coming in two distinct turret designs. The IJN Hyuga has armour tailored for broadsides, with higher protection on the turret face and the sides of the ammo elevator. IJN Fuso's armour is similar, the most notable difference being a better and more uniform protection of the ammo elevators. The Kongo-class features protection that's more all-rounded, lacking any particular weak spots like the base of the ammo elevator on Hyuga. 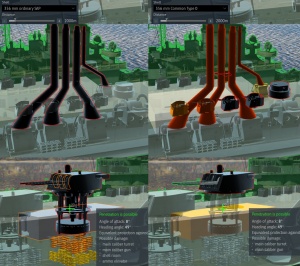 There's no direct 1-to-1 analogue to the Type 41, the nearest competitor is the American 14 inch/45 Mk.8 (historically Mk. 8 was 1930s upgrade to the 1910s design, around the same age as the Type 41 designed in 1908). Against the US equivalent the Type 41 has a far better rate of fire, targeting speed, vertical guidance, somewhat lower muzzle velocity, smaller explosive filler, and about the same penetration, overall being able to deliver 38% higher explosive mass on target with the HE shells on per-gun basis, or even 64% more when the SAP shells are used.

However, comparisons to the other high-calibre guns are not so rosy. While muzzle velocity and guidance speed are about average and perfectly adequate for a gun this size, the explosive filler is one of the worst for each of the shell types. The AP shell has average to above-average penetration, but the SAP round has some of the worst penetration values across the ranges. To give a specific example, the Type 41 falls significantly behind the Soviet 305 mm/54 B-50 in pretty much every respect for every shell type, despite the Soviet gun's much lower calibre.

In spite of this, the 36 cm/45 Type 41 is a very solid gun - it's lacking any particular highlights, but it also has no huge downsides.

Usage of the 36 cm/45 Type 41 is no different than most of the other high-calibre main guns on the battlecruisers and battleships. The only feature of note are the lacklustre HE shells that should be avoided outside of some very specific circumstances. Overall though the gun is perfectly adequate, there's no point in which it stands out above all its peers, but there's also nothing where it's extraordinarily lacklustre.

The 45 calibre 41 Type 36 cm Gun (45口径四一式36cm砲) was the main gun famously used on the Kongō-class battlecruisers along with the Ise and Fusō-class battleships. It shared a piece of history with the 50 calibre 41 Type 15 cm gun, being originally introduced with the Kongō battlecruiser, at the time the highest calibre naval guns in service of any country in the world. First units were manufactured in the UK by Vickers, while the remaining was constructed at the Kure Naval Arsenal, for a total of over 100 guns of the type being built until the end of World War 2.

Being widely used type of gun, they have seen a number of modifications and modernisations over their lifetime.

During the inter-war period gun turrets were modified to increase the elevation from 33° to 43°. It was achieved by reconstructing the gunwell and lowering the revolving part of the turret's structure. This upgrade was completed for all ships with the Type 41 guns except for the aft-most guns on Ise and Hyūga, until both were eventually rebuilt to hybrid carriers, thus removing the problematic gun turrets.

Other upgrades included a new, double, longitudinal flashtight bulkheads separating the two guns in the turret or a new loading cages allowing a full set of charges to be loaded in a single stroke of the power rammer. Additionally in December 1937 an experimental sprinkler system was added to the battleship Ise, decreasing the risk of fire and catastrophic explosion.

The 36 cm Type 41 used several different shell types over its lifespan. Most of the development was focused on the armour-piercing shells, which were supplemented by two types of high explosive rounds, and, during the WW2, the Sanshikidan shells.

An additional set of practice shells was built for the training exercises: