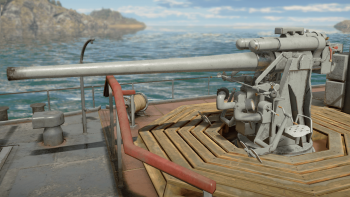 The 120 mm/45 10th year type is a Japanese naval gun found mostly as a secondary weapon on cruisers, but it also the primary weapon on a gunboat and tank destroyer. It is nearly identical to the 120 mm/45 3rd Year Type from which it is based on, but it lacks a SAP shell.

The 120 mm/45-calibre 10th Year Type is an Imperial Japanese Navy anti-aircraft gun based on the design of the earlier 120 mm/45 3rd Year Type. Development of the design for a high-angle anti-aircraft gun based on this design began in 1921, but it was only formally accepted into service in 1927 which led to the designation the 10th Year Type (1927 was the 10th year of Emperor Taishō's reign). The gun was mounted as an anti-aircraft on a number of cruisers and aircraft carriers as Japan began to build its navy to face the United States for dominance of the Pacific. While some aircraft carriers such as the Akagi, which continued to mount these guns until it was sunk at Midway in June 1942, were mounted with these guns from the start, others such as the Furataka-class and Aoba-class cruisers were refitted with these guns during fleet modernization in the 1930s, while the experimental Yubari light cruiser was refitted to use one in early 1944. The modernized cruisers and the Kaga aircraft carrier would later have another refit with 127 mm/40 Type 89 guns, but other ships would use them until the end of the war.

Considered to be an excellent weapon, the 10th Year Type was tested with a Type 89 HA computer fire control system in 1931 on Myôkô-class aircraft carriers and found to have 2.2% accuracy against targets flying at speeds of 60 to 70 knots at 4,900 and 6,600 feet altitude. The guns were later mounted as a dual-purpose coastal defense in the Pacific Theatre of World War II. The gun was also mounted backward on the chassis of the Type 97 Chi-Ha for the Special Naval Landing Forces of the Imperial Japanese Navy creating the Chi-Ha Long Gun which was tested at the SNLF base in Yokosuka.