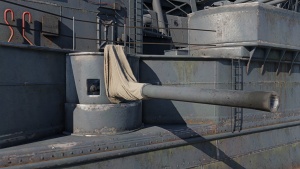 The 152 mm 15 cm/50 Type 41 is a Japanese high-calibre gun found as a primary weapon in twin-turrets on the Agano and a secondary single-mount casemate gun on Kongo-class battleships. Historically it was a family of weapons originally designed by British Vickers, then redesigned for production in Japan in 1908. Aside from the aforementioned ships, the guns were also used on the Fusō-class battleships and as coastal defenses on Guam. 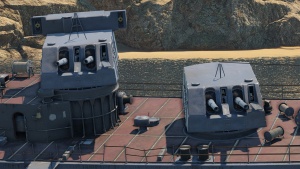 The Type 41 is a typical weapon for a cruiser, featuring a good mix of calibre, rate of fire, and the overall physical dimensions of the gun. It makes it suitable for engaging targets at a long range and directly countering destroyers. The key highlight is its SAP shells.

Both HE and SAP shells are sufficient to defeat armour on any destroyer or a coastal unit, while SAP shells will struggle only with some of the reinforced points on the heavy cruisers or larger warships. The key advantage of SAP shells is their explosion after 8.5 m, making them suitable for dealing with enemy destroyers without switching shells to HE. Given that SAP shells have nearly the same explosive filler as HE - using HE is extremely situational and SAP is superior in nearly all circumstances.

HE-TF shells are available only on the twin-gun turrets of IJN Agano, as these turrets have a significantly increased vertical guidance and targetting speed, making it possible to engage aerial targets. 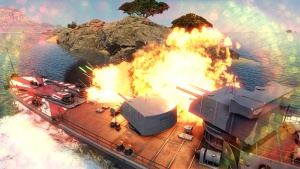 The gun is featured in two configurations: single and dual-mount, with single-mount having a much higher rate of fire, increasing from 6.2 shots/minute to 10 shots/minute, a 60% increase.

The biggest pain point are its dated shells. HE shells have a low amount of explosive filler. SAP rounds have a low penetration among the shells of the type, their explosive filler is relatively large, but in both statistics, it's worse than the Soviet 152 mm/57 B-38 (152 mm).

And while the single-mount weapon trades these disadvantages for a high rate of fire, the same cannot be said for the dual-mount. Still, it does have some key advantages: high elevation angles, a fast horizontal guidance speed and an added HE-TF shell (even if it has a small explosive filler).

It's also worth mentioning that the muzzle velocity is relatively low compared to its peers, however, it's perfectly adequate, and both: lower and higher calibre guns commonly feature lower muzzle velocities. 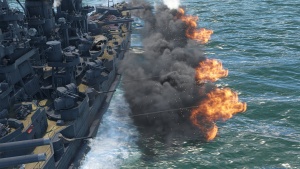 The weapon can be found as both: a primary weapon on IJN Agano (firing 6 shells broadside every 9.7sec) and a secondary weapon on the Kongo-class (firing 4 shells every 6 seconds). In terms of TNT equivalent per minute for the HE shells, this translates to 117,9 kg in Agano vs 126.8 kg in Kongo (or 95,1 kg/minute for the arcs where only Kongo's 3 guns can fire). So while at a first glance it might seem that the Type 41 as a secondary weapon is mostly just a filler, in reality, it can output as much damage as a cruiser.

The history of the 50 calibre 41st Year Type 15 cm Gun (50口径四十一式15cm砲) reaches the year 1908 (hence the "41st year" - 1908 in the Georgian calendar is the 41st year of Meiji era in Japanese dating) when the Imperial Japanese Navy adopted the redesigned 6"/50 Vickers guns that were to be used on the Kongō and Fusō-class. The redesign was done by the Kure Naval Arsenal engineer, Dr. Hata Chiyokichi (who will also design the 155 mm/60 3rd Year Type), changing the wire-wound construction to a three-layer built-up, making it cheaper to replace liners.

When the Kongō-class battlecruiser was laid down for construction by the Vickers Shipbuilding Company in North West England it received the British 6"/50 Vickers Mark M guns, but the designation was kept, and the subsequent ships of the class were built in Japanese shipyards received Japanese-built guns.

Once commissioned in 1913 the gun characteristics were praised, though it was found that the Japanese sailors struggled to manually load the 45.4 kg projectiles, as they were of a lighter build than their English colleagues. In effect, the real firing rate of the gun was only 6 rounds per minute, in contrast to 10 rounds per minute on the English ships, and as the crew grew tired it decreased even further.

When Agano-class was being designed in 1939 it was decided that the 15 cm/50 Type 41 will be used in specially designed mountings. In order to counter enemy light cruisers design was settled on a twin mount. Further improvements included electro-hydraulic slewing and elevation and an increase of the elevation angles from +30° to +55° - both changes were made with an ability to engage aircraft in mind, however, the new turrets were unable to effectively fire at these targets, as each gun had to be lowered down to +7° for the manual reloading of the shells (no automation could be introduced due to mass constraints). Another interesting quirk of these mounts was the fact that they were on a large, rotating mechanism, along with the 1st stage magazine below (hence why they're called mounts, rather than turrets). Shells were carried onto the contraption manually from the main magazine and then hoisted up to the gun housing. All of this was done to minimize the mass and size of the main artillery. As a result, the double-mount weighed only 72 tonnes, compared to 76 tonnes of two Fusō-style single-mounts.

In 1943 anti-submarine projectiles were provided for the guns on top of the existing Type 0 and Type 4 shells. These were longer, heavier projectiles with a blunt nose designed to form a cavity around the shell as it penetrated the water, enabling it to penetrate the submarine hull at the depth of 8 m.