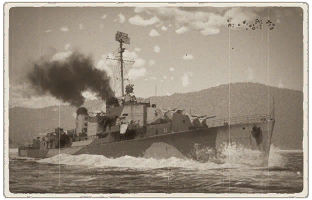 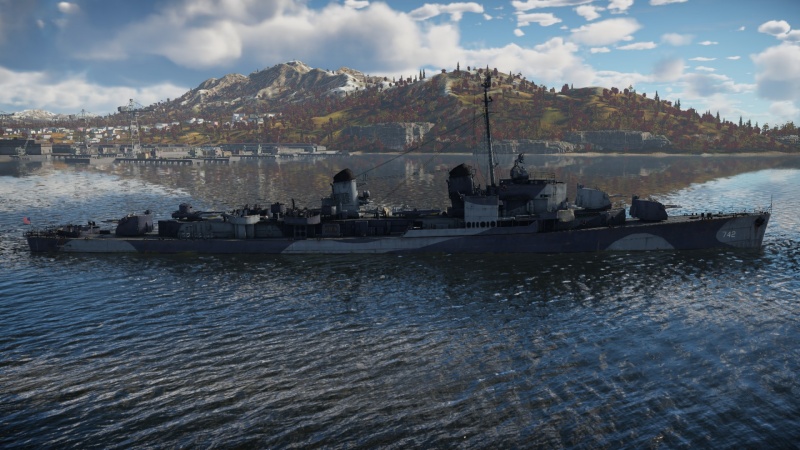 USS Frank Knox has the same armour layout as the USS Gearing, the lead ship of the Gearing class. This means she has a main belt of 0.75 inches, which is surprisingly well armoured for a destroyer of this rank. This is more than the 0.5 inches of the Porter class and the same as the earlier Fletcher class. This belt cannot stop more than 20 mm autocannons, but it significantly lessens spall damage from HE shells from other destroyers and light cruisers. The dual turret mounts have 0.125 inches of armour on the front, sides, rear, and top, and there is a 0.5-inch deck armour plate covering the machinery spaces.

The magazine is placed under the aft turret, and is protected by fuel tanks on both sides of the hull. These fuel tanks will protect the magazine from high explosive shells, but any SAP or AP will slice straight through and ammorack the ship. Captains of USS Frank Knox should avoid taking hits to the stern of the ship whenever possible, and evasive action is recommended as any direct hit under the aft turret will most likely result in total loss of the ship.

As for crew count, USS Frank Knox is quite well off. With a crew count of 336, Frank Knox is able to lose more crew members and keep fighting in comparison to her older Porter-class and Fletcher-class predecessors, allowing her to stay in the fight for longer. This can allow captains of USS Frank Knox to serve as a flotilla leader and absorb shots in some situations, although as stated before it is not recommended to do so while the stern is within the line of fire.

The primary battery has enough armour to stop some spall damage from misses with high explosive shells, but any direct hit from any destroyer calibre gun or higher will inevitably knock the mount out of action. The secondary battery has no armour whatsoever, and splash from hits or near misses will commonly damage or destroy the battery. It is recommended to avoid repairing these whenever possible, as they will inevitably be destroyed again and drain more crew from the ship.

USS Frank Knox, as a member of the Gearing-class, has very similar performance to USS Gearing and the USS Sumner her class was derived from. This gives her quick acceleration, only taking approximately 25 seconds to reach her flank speed of 34 kn from a standstill. The rudder responds within 1 second, and speed will fall to 24.0 kn in a sustained turn, so captains of USS Frank Knox are advised to avoid long sweeping turns as much as possible, as these slow the ship massively and can make it a much easier target. The Frank Knox takes approximately 35 seconds to come to a halt after the order has been given, and overall the ship performs well and is responsive, particularly at lower speeds.

The primary armament of the USS Frank Knox is 6 x 5-inch/38 Mk.12 in three twin mounts, two superfiring forward and one aft, directly above the magazine. The 5-inch/38 has a very high rate of fire, with 22 rounds/min (2.8-second reload) with a maxed reload and a still respectable 15 round/min (4-second reload) once the ready rack is depleted. This gives the USS Frank Knox excellent volume of fire compared to other nation's contemporary destroyers, while still having shells with good damage and penetration.

The USS Frank Knox gets access to four shell types - AAC Mk.34, Common Mk.32, SP Common Mk.46, and AAVT Mk.31. As the Frank Knox is a premium, captains will have all four shell types unlocked immediately. Therefore it is recommend to run two shell types, about 1/3 ammo load AAVT Mk.31 and 2/3 Common Mk.32. The AAVT shell has the same quantity of explosive filler as the AAC shell, and performs identically against surface targets whilst having a proximity fuse for use against air targets. The Common shell is recommended over the SP Common shell due to the greater quantity of filler in the shells compared to the SP Common shells, and the lower penetration isn't a concern against the destroyers of the rank. If captains find themselves fighting cruisers, the SP Common shell with its higher penetration is recommended.

Of these, Universal serves as the default belt. With half HE and half AP, this belt serves as a good dual purpose belt, and will shred any aircraft or lightly armoured destroyer, or smaller vessel. This belt will serve well in most situations and should be run if the captain wishes for a balanced close range defense.

40 mm HE clips works well for captains more concerned with air attack, as the higher density of HE shells in the belt will destroy enemy aircraft slightly more quickly than the Universal belt will. It still has one AP shell every four rounds so it is still capable of destroying surface targets, but if they are the largest concern the 40 mm AP belt will be the best option.

USS Frank Knox has 11 x single mount 20 mm Oerlikon Mk.II cannons for its anti-aircraft battery. 4 are positioned near the bridge, 2 port and 2 starboard. Two more are positioned on the port side of the second funnel, with another pair positioned forward of the aft torpedo launcher, on the starboard side. The final three are positioned aft of the rear turret, in a triangle. The Oerlikon was one of the standard mid-to-late war anti-aircraft guns, and has good fire rate, traverse and reload speed, one of the best small anti-aircraft guns of the war. Captains can expect these to shred any plane within about 1.5 km, and they will serve to deter or destroy any aircraft which has made it past the medium anti-aircraft battery, though they should not be expected to be capable of destroying targets before weapons release.

USS Frank Knox, as a destroyer, carries torpedoes for use against heavier vessels. These come in two quintuple launchers, one in between the two funnels, and one aft, forward of the rear turret. These carry the American Mk.15 torpedo, with 5.5 km of range stock, and a speed of 45 kn. Once the "Torpedo mode" modification is selected, the range increases to 9.15 km, but the speed drops sharply to 33 kn. With the limited range of US torpedoes, in most cases it is recommended not to run the extra range, as the extra speed and a close launch are a more reliable way to guarantee hits.

Additionally, USS Frank Knox carries 24 x Mk.6 depth charges. These were intended for use against submarines, captains should expect very limited use against surface vessels. These can sometimes be used against PT boats which have gotten too close, or landing some on the deck of enemy ships in very close encounters, but overall they will play very little role in most engagements.

USS Frank Knox plays similarly to other American destroyers of this rank: fast, hard hitting and aggressive. Unlike destroyers of other nations, American destroyers are armed with the 5-inch/38 dual-purpose cannon, with a very fast fire rate and good damage. Frank Knox has 6 of these cannons, and this allows her to rapidly dish out punishment against any lightly armoured vessel in the vicinity. Captains are advised to drop a spread of torpedoes in the path of heavier vessels, and then proceed to close the range with enemy destroyers. The 0.75-inch armour belt of anti-fragmentation armour will help lessen damage from HE shells, and the ship has a high crew count for a destroyer as well. This means the Frank Knox works well brawling, especially against destroyers with no SAP shells for their primary weapon. USS Frank Knox does exceptionally well at quickly dispatching enemy destroyers, as the main battery's high fire rate allows for high amounts of damage in a short period of time, and the Bofors secondary battery is quite the hefty backup. In mixed battles, the USS Moffett will be the most common vessel seen; it is recommended to shoot under the aft two turrets: the magazine is located here and this will ammorack the enemy destroyer in a single hit if detonated. This weakspot also works against most other American destroyers, including USS Frank Knox. Captains of USS Frank Knox are advised to hide the rear magazine whenever possible, using terrain if able.