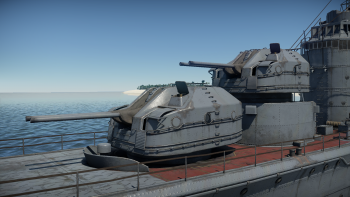 The 100/65 mm Type 98 is a 100 mm dual-purpose naval cannon. The Type 98 mod A is the twin turret mount of the Type 98 gun as found in-game on the IJN Akizuki. It is notable for its very high rate of fire and 1000 m/s muzzle velocity, the highest of any naval mounted cannon currently in the game.

Two shells are available for the Type 98: HE and HE-DF. HE-DF is an airburst time-fuse shell that detonates a certain amount of time after firing, set by the crew. Otherwise, both shells are nearly identical.

However, the Type 98 makes up for this discrepancy in explosive filling with its very fast rate of fire, effectively sending as much or more TNT per minute as some of the bigger 5-inch guns. The Type 98 also has a muzzle velocity of 1000 m/s, a velocity unmatched by any naval cannon currently in the game, even compared to the 8-inch guns of heavy cruisers.

The Type 98 has the fastest muzzle velocity of any cannon in the game, making it great for long-range engagements. Despite the small explosive filling, with its quick reload, ships armed with the Type 98 can overwhelm their enemies with sheer volume of fire. The muzzle velocity and rate of fire are especially useful for taking down aircraft using the HE-DF shell.

Because of the low TNT equivalence and relatively small calibre, the HE rounds often struggle against the armored destroyer. Against such targets, disabling the enemy's turrets first is often best. However, against more heavily armoured targets such as cruisers, the Type 98 guns are entirely ineffective because it lacks any sort of AP shell.

Designed in 1938, production began in 1940 of the 10 cm/65 Type 98 gun. There were two versions of the Type 98 cannon produced, a monobloc design and one with a removable barrel lining. Both used a horizontal sliding breech design. Loading was manual and assisted by mechanical spring-driven rammers that would be cocked by the recoil of firing the gun, allowing for the gun to be reloaded at any elevation (i.e. without having to reset it to the neutral position).

Only HE shells were developed for the Type 98. The Type 98 fired a 13 kg time-fused projectile with a 15 kg propellant charge. The fuse was set by machine prior to being loaded. The projectile contained a 950 g TNT explosive charge and could be fired at 1000 m/s muzzle velocity at up to 21 rounds per minute. Because of the fast rate of fire and muzzle velocity, the Type 98 had a short barrel life, only being able to fire approximately 400 rounds before needing replacement.

The Type 98 was mounted on the Akizuki-class destroyers, the light cruiser Ooyodo, the aircraft carrier Taihou, and was planned to be used on the aircraft carrier Shinano and the planned B-64/B-65 class battlecruisers. On the Akizuki-class destroyers, the Model A twin mount was used. It could traverse up to 16° per second horizontally and vertically and could elevate -10°/90° vertically. Typically, it could fire 15 rounds per minute.

Throughout the war, 169 Type 98 guns were produced, 116 of which were mounted on naval vessels. Starting in 1945, most new productions were diverted to land-based AAA installations.