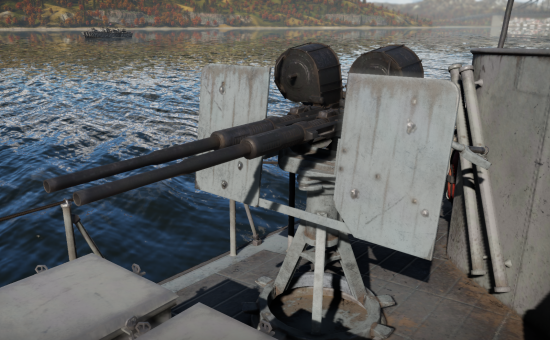 The 20 mm/70 Oerlikon Mark 24 is an autocannon equipped on various naval craft in the game. The Mark 24 is a twin-mount version of the 20 mm Oerlikon cannon.

The adoption of the 20 mm Oerlikon cannon has made it the staple short-range anti-aircraft armament in both the US Navy and the Royal Navy. By 1944, the US Navy still sought to increase the 20 mm firepower on its ships, but was soon coming into manpower and weight issues as so many single-mount Oerlikons are being placed onto ships. The US Navy also wanted to increase the number of 40 mm Bofors autocannons present without compromising 20 mm firepower.[1][2] Weight reductions provided in succeeding Oerlikon models culminating with the Mk 10 in mid-1943 that weighed around 1,000 lbs (assembly includes gun shield),[3] but each gun attached to a ship required a crew of three (four if gun is equipped with a Mk 14 gun sight) to operate at its full efficiency.[4] 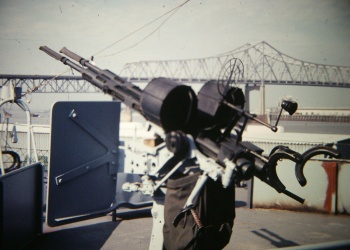 An Oerlikon Mark 24 on the deck of a Fletcher-class destroyer.

To maintain the same 20 mm firepower while reducing the number of crews on a ship, or increase the 20 mm firepower while maintaining the same manpower, it was decided to create twin-mounts of the Oerlikons. Twin-mount prototypes were created with the Mk 20 based off the Mk 4 while the Mk 21 was based on the Mk 10.[1][5] The production version was standard on September 1944 as the Mark 24.[3] The Mark 24 weighed at 1,400 lbs including the gun shield and gun sight, which was a considerably light increase in weight compared to the Mk 10 with the benefits of having an additional gun barrel. The Mark 24 also benefited from being built from a Mk 10 pedestal, allowing the twin-mount design to be used in the same mountings as a single-mount.[5] The twin-mounted version would eventually replace the single-mounts throughout the war and in the post-war period as well, only eventually being discontinued once jet aircraft made the 20 mm Oerlikon obsolete as a short-range anti-aircraft armament.

One experimental twin-mount armament based off the Mark 24 was the Mark 25, which saw the Oerlikon guns of the Mark 24 replaced with two 20 mm T31 aircraft cannons. Though it had a higher rate of fire, it caused excessive vibration onto the mounting and was not followed up on.[2]