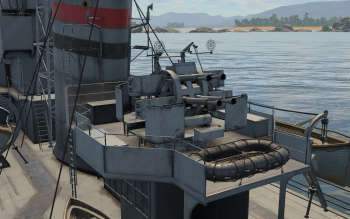 The 40 mm 2pdr QF Mk.IIc, nicknamed the "pom-pom", is a British naval autocannon, used as a primary armament for coastal ships and an anti-aircraft weapon on bluewater ships.

Despite the similar name, this weapon has no relation to the 40 mm QF 2-pounder used on British tanks.

The 2pdr "pom-pom" autocannon is a 40 mm anti-air autocannon that entered service with the Royal Navy in 1917. The gun is belt-fed with 56 rounds capacity per belt and a rate of fire of 200 rounds per minute. The gun was usually found in either a single-mounted version on coastal boats and early destroyers, as well as a quad-mount version found on a British wartime destroyers.

The 2pdr pom-pom performs remarkably well for a gun originated from the Great War era. The gun has superior rate of fire than that of the famous Bofors autocannons, though it is handicapped by the lack of auto-feeding mechanism and low shell velocity which reduced the range of the guns to 3 km at best.

For the most part, the pom-pom's usage is similar to that of the Bofors, with a few distinctive differences. As the gun will never jam due to the belt-fed mechanism, the pom-pom performs better with a short but rapid burst to quickly dispatch the opponents, but the frequent reload will reduce the gun's effectiveness, especially when the enemy is getting too close. Thus, the pom-pom often requires trigger discipline at closer range to accurately hit and destroy the targets before they can attack with bombs or torpedoes.