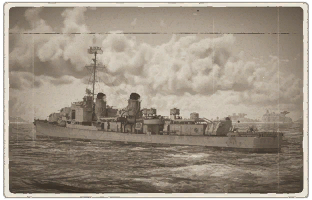 The USS Gearing possesses a surprising amount of armour compared to many destroyers of the same BR. This comes in the form of a main belt of 19 mm (3/4 inch) of antifragmentation armour with additional protection around main emplacements and the main rangefinder. The machinery spaces also possess 12 mm (1/2 inch) of deck armour to protect again small calibre plunging fire.

Survivability of the ship comes down to two main points. The first is the very large crew complement of 336 being over 70 crew larger than the USS Fletcher at the same BR. This results in the ship being able to take more overall punishment as there is more crew available to replace losses. The second point and the main downfall of this ship is the dangerously exposed ammo elevators under the main guns that if hit may result in a catastrophic ammo explosion. This may be partially avoided by angling the ship so that incoming shells may hit fore or aft of these elevators but this tactic cannot be used every time.

The mobility of the USS Gearing is typical of most American destroyers, meaning that it accelerates quickly, turns surprisingly well, and can switch to reverse in a short amount of time. The overall top speed is competitive at its BR, but will still be beaten by the likes of the Z25 or Soviet destroyers such as the Leningrad.

The 5 inch guns of the USS Gearing are the same as on other American destroyers with their fast fire rate and access to both SAP shells and proximity-fused shells. Unlike the destroyers USS Somers or USS Porter, the USS Gearing only has 3 twin turrets instead of 4, thus resulting in 25% less main calibre firepower.

The USS Gearing has a strongest secondary armament with a total of 12 x 40 mm Bofors cannons that can completely shred any aircraft at medium range and obliterate any small boat that would come too close. These cannons can also make quick work of exposed modules on destroyers at close range.

The short range AA of the USS Gearing is made up of no less than 11 x 20 mm Oerlikon autocannons. These can quickly handle most close range threats but their range is limited so if they start firing then look out for closing threats.

The USS Gearing is capable of carrying both 10 x 533 mm Mk.15 Torpedoes and 24 x Mk.6 depth charges. The torpedoes are effective at close range with a powerful warhead consisting of 224 kg of TNT however their limited range of 5.50 km (9.15 km with Torpedo Mode) can limit their utility on larger maps prevalent at higher BRs.

The depth charges are dropped from the back of ship and as such are only useful in the event of an opponent being directly behind the ship. This is a very rare event even at low BRs so carrying these exposed drums of TNT is not recommended.

The USS Gearing can be played aggressively as the fast firing 5 inch guns and powerful 40 mm cannons can shred most opponents with ease and the large crew count allows for punishment to be taken in return. It is recommended to release torpedoes early in the match to prevent them from being detonated later in the match.

Design work of the Gearing class started with the preceding Sumner class, which were themselves a modified Fletcher incorporating the new twin high angle twin mounts for the 5"/38 calbre guns. The Gearing design mainly evolves from the Sumner by increasing the length of the hull by 4.3 metres, allowing greater fuel storage and therefore increased range. The higher beam to length ratio also increased the top speed, most of the ships in the class achieving 36 knots. USS Gearing herself was commissioned on May 3rd 1945.

During the 1960s, USS Gearing received the Fleet Rehabilitation and Modernization (FRAM) 1 upgrades. This converted the Gearing from a primarily anti aircraft destroyer into a dedicated anti submarine warfare destroyer. Modifications include the new advanced sonar, the ASROC anti-submarine torpedo launcher (also capable of launching nuclear depth charges), the Mk.44 torpedo and the DASH anti-submarine helicopter which had a range of 35km as well as the hangar and facilities needed to maintain it.

USS Gearing was commissioned a few months before the end of WW2 and trained crews for other destroyers until early October of 1945. Her immediate postwar career was spent in peacetime operations on the Atlantic side of the Americas before sailing into the Mediterranean in 1947 until 1948. Gearing would then operate around the Caribbean before taking part in Operation Frostbite, sailing into the Arctic to test and develop cold water techniques and equipment before returning to operate in the Caribbean and Mediterranean until 1961 when she took part in the negotiations for the Santa Maria hijacking. In the following year, Gearing would take part in the blockade of Cuba before moving on to operate in the Atlantic when diplomatic negotiation ended the crisis. After receiving the FRAM I upgrades she would continue her normal operations.

USS Gearing would be decommissioned in 1973 and then sold for scrap the following year.