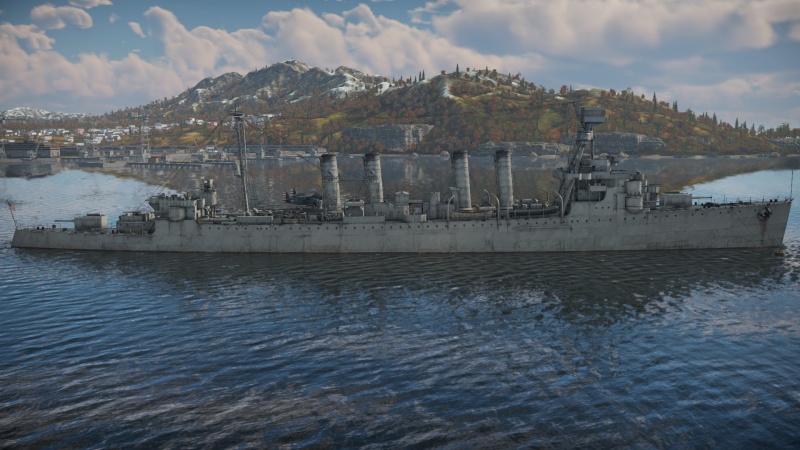 The Raleigh is equipped with two dual 40 mm Bofors mounts and twelve single-mount Oerlikon cannons. This provides some decent AA cover at close range, though it certainly isn't winning any awards for defensive firepower. It is better to simply stay close to AA ships and destroyers for some extra protection.

The USS Raleigh is mostly used for lower-level support for late and early-tier destroyers once the enemy team has early light cruisers. But the ship is much of a 50/50, as it may face late and early-tier destroyers along with same-tier light cruisers, but it will sometimes be uptiered to fight battles against cruisers such as the Cleveland, Prinz Eugen, and Mogami, having very little chance besides torpedoes to fight back.

The ship's main armament is powerful against lightly-armoured enemies and light cruisers, but the ship's guns turn slowly, and the ship only has five turrets (three broadside, two turrets) to fight on one side, and has a slow reload rate at stock. Once the ship is completely spaded out, it will perform better, but not much of a dangerous targets to late-tier cruisers.

The secondary armament is somewhat of an upgrade besides 37 mm and 40 mm AA guns, as the eight 76 mm 3-inch Mark 10 guns are good for anti-aircraft defense and come with HE-VT shells, capable of dealing with heavier aircraft. But the downside is that the range is slightly better than a regular autocannon, as its range is short and won't shoot well against heavily armoured aircraft. The guns sometimes will not detect aircraft, and because the calibre of the gun is not great for early-war cruisers, the 76 mm guns will not be winning anti-aircraft awards. You can carry mostly HE-VT for aircraft, but should also carry regular HE for incoming torpedo boats.

The final weapon of the Raleigh is the six Mk.15 torpedoes split into two three-tube launchers on both sides near the rear broadside guns. The Mk.15 torpedo is mediocre in the game on U.S ships, because of their range and speed, which is doubled with improved torpedo modifications. Once enemy cruisers better protected than you try to engage you, it is recommended to try and launch two torpedoes as a test salvo to predict their movements. Once a torpedo hits a vital section of the ship such as the engine or rudder, use three more torpedoes to sink the enemy ship, and if the enemy is still standing, use the main guns to finish the enemy.