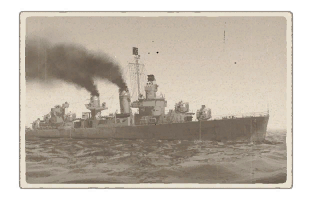 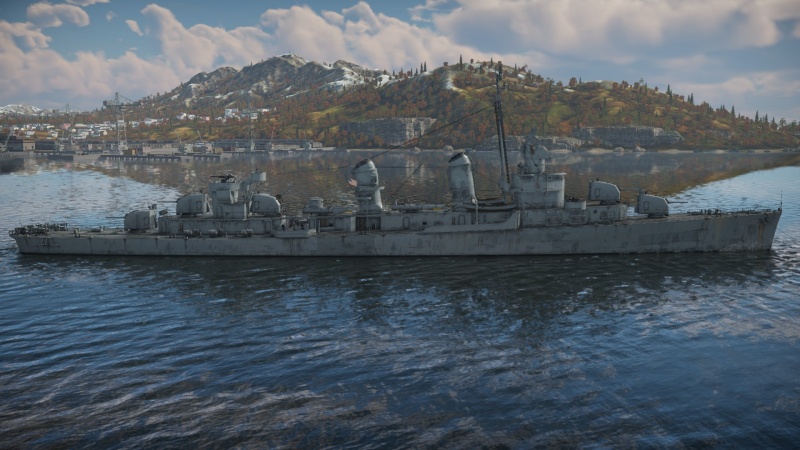 The Fletcher actually has decent survivability for a ship of its class. It has a decent crew count for a ship of its BR (273 crewmembers), though it is mediocre when compared to the German destroyers, which typically have upwards of 320 crew. However, what the Fletcher does have is a main armour belt composed of 13 mm of anti-fragmentation armour. This may not seem like much, but it can actually shatter most low-calibre High-Explosive rounds, and potentially even destroyer-calibre weapons! However, keep in mind that most late-stage American destroyers, such as the Sumner, also have access to a main armour belt. As well, don't rely on your armour to tank damage, as most high-calibre HE shells will still cause serious damage to your ship's compartments.

In terms of critical components, some of the ship's vital parts are hidden underneath the waterline. The ammo racks are all under the waterline, and the rear rack is completely enveloped by a fuel tank. The massive engine compartment is partially underwater, but will easily be hit by any incoming HE shells. The main risk to the Fletcher are its first-stage ammo racks - each of the guns have a first-stage ammunition storage carrying 25 rounds of ready-use ammo. Because these first-stage storages are directly beneath the guns, any hit from an HE shell could detonate the ammo, resulting in severe (or perhaps fatal) damage to your ship.

USS Fletcher reaches a flank speed of 35 kn at full steam. This places her middle of the pack compared to other American destroyers, being slower than the Porter-class which it precedes in the tech tree, but fractionally faster than the USS Sumner also at her rank. This speed will allow Fletcher to take objectives and key locations; however captains should be wary since other, faster destroyers such as the IJN Shimakaze may arrive before USS Fletcher is capable of doing so. USS Fletcher only takes 30 seconds to accelerate to flank speed, and 34 seconds to come to a halt. She is very responsive to engine and rudder commands, the latter only taking around 2 seconds to come full over. Speed falls to around 24 kn in a sustained turn; fractionally faster than other American destroyers, but this still leaves Fletcher vulnerable to enemy fire and prolonged manoeuvers are advised against.

The Fletcher carries a strong main armament and is a step up from the preceding USS Aylwin. It is armed with 5 x single mount 5-inch/38 Mk.12s with an eye-watering fire rate of 22 rounds per minute with first stage ammo supplies, and a very respectable 15 rounds per minute once the first stage ammo is exhausted. USS Fletcher is capable of easily dispatching most similar rank opponents, up to lightly armoured cruisers, provided the captain aims accurately. The arrangement of the gun mounts is similar to that of the earlier USS Aylwin, but with an extra mount placed behind the torpedo tubes facing forward. Captains of the USS Fletcher should expect reasonable engagement ranges to be below 10,000 metres, and once within around 7,000 metres accurate fire will be possible.

USS Fletcher uses the same ammunition as other 5-inch/38 armed destroyers, with the AAC Mk.34 shell being the default. Additionally, the Common Mk.32, SP Common Mk.46, and AAVT Mk.31 are available as tier 1, 2, and 3 modifications respectively. The HE-VT shells are quite potent against aircraft, and with a 23-metre trigger radius, the 3.2 kg explosive mass is almost guaranteed to damage or destroy any aircraft which finds itself too close. Additionally, the AAVT shell works as well as the HE shell against unarmoured targets such as patrol boats: once it is unlocked it is recommended to replace the AAC shell. At the rank which USS Fetcher is placed, there is a high chance of seeing early light cruisers which can have formidable armour, for these and any destroyers with anti-fragmentation armour such as other American destroyers, the Common and SP Common shells are recommended. The Common shell will have greater effect against destroyers with its larger filler, and is the recommended shell in most cases. The SP Common shell with extra penetration should be utilized against cruisers, and still does reasonable damage to destroyers, so it can be utilized instead of the Common shell if ammo count is a concern.

The anti-aircraft armament for Fletcher is 6 x 20 mm Oerlikon Mk.II cannons. These are spread along the ship with two of them being near the bridge and facing forward with the other four being on the main deck amidships, which gives a balanced level of coverage. Combined with the 40 mm Bofors L/60, these can give a decent level of short range defence and can easily take out aircraft which stray by and fail to evade. These guns can also be the last line of defence against small boats if necessary.

The torpedo armament on Fletcher is 2 x quintuple launchers carrying the 21" (533 mm) Mk.15 torpedo. The launchers are amidships and grouped together, but the tight spaces mean that you do need to manoeuvre the ship a bit to launch the torpedoes at their intended targets. The standard setting for the torpedo is 5,500 m at 45 knots and by using the Torpedo Mode upgrade it can be modified to 9,150 m at 33.5 knots. A single hit on a ship from one of these torpedoes will either be severely crippling or outright destroy it. Having 10 torpedoes allows for a wide range saturation attack with the increased range, or a wall at closer ranges.

After unlocking the Bomb Mortar upgrade, you have the option to equip 6 x Mk.6 mortar depth charges. With three on each side of the ship near the aft main battery mounts, this ship has more than the Farragut. These weapons have a very limited and short-range, but can be highly destructive in a close-quarters duel if their deployment is timed correctly.

Considered one of many strong destroyers on the American tech tree, the Fletcher is most effective in gunning down its targets and maintaining that pressure on enemy destroyers. With the 5 main cannons and its quick rate of fire, even if one of these cannons gets destroyed, it will still be able to maintain its firepower with the remaining four. Altogether giving enemies a hard time when they're in range. The most favoured maps for the Fletcher will be maps that will have multiple island cover, as you will be able to take advantage of your speed of 40 knots and decent turn speed to swiftly attack a target and escape if needed. The torpedoes come in handy by locking down choke-points and common paths for players, making a long range attacks on the AI ships in encounter games, or forcing enemy ships to dodge.

As for playstyle, it can be used for hit and runs against other enemy destroyers and PT boats that are looking to capture objectives. When faced against cruisers, the Fletcher does have the rate of fire and shells to fight back. However, your anti-fragmentation armour will not be enough to prevent the powerful punch of large HE shells or AP shells that even early cruisers will use against you so it is highly advised to avoid larger ships.

One of the most prolific ships during World War II 175 ships of the Fletcher-class destroyer were commissioned between 1942 and 1944. The designed proved so successful that it continued to serve into the Korean and Vietnam War.[1] The Fletcher class saw widespread use across the pacific theatre and was highly successful due to its long operational range and a high degree of flexibility that made it able to tackle almost any task.[1]