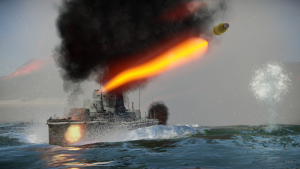 The 37 mm Type 11 is a medium-calibre infantry gun adopted for naval use, one of the first slow-firing Japanese weapons that the player will use while going through the research tree. Its effectiveness is average at best, however its explosive power is capable of piercing through nearly anything it might encounter.

The gun comes with only one type of shell: high-explosive fragmentation.

Type 11 comes with the best explosive filler of a comparable cannons, however at the same time it's above average targetting speed and one of the lowest rates of fire. Note that the table below is meant only as an overview, not a detailed analysis.

Due to weapon's low targetting speed, combined with an extremely low velocity it's very difficult to use at range of above 1000m, forcing to close in in order to accurately inflict damage. Weapon's strength lies in its explosive filler, able to handle most small boats within few shots.

Type 11 37 mm (37mm狙撃砲, 37mm sniper) was designed as an infantry gun with the objective of destroying enemy machine gun emplacements. Serial production began in 1918 and the gun saw a number of improvements and evolutions over the years, including pattern 22 (十一年式平射歩兵砲, 11th year model low trajectory infantry gun) until it was finally replaced in 1934 by the Type 94 of the same calibre. The weapon was originally derived from the French Canon d'Infanterie de 37 modèle 1916 TRP.

The gun saw wide use in Japanese forces, from being an infantry support gun, through use in tanks (eg. Chi-Ro), to the first Japanese armoured boat (with subsequent designs using the 57 mm Type 97 cannon instead). While the gun was up to the task during the Second Sino-Japanese War, it was severely lacking by the time of the Pacific War and unable to penetrate >30 mm armour on allied armoured vehicles even from as close a distance as 50 meters.

The weapon featured a wide range of ammunition, including various types of high-explosive rounds with different fillers, armour-piercing, anti-concrete rounds, and of course training rounds.