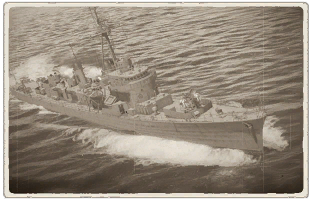 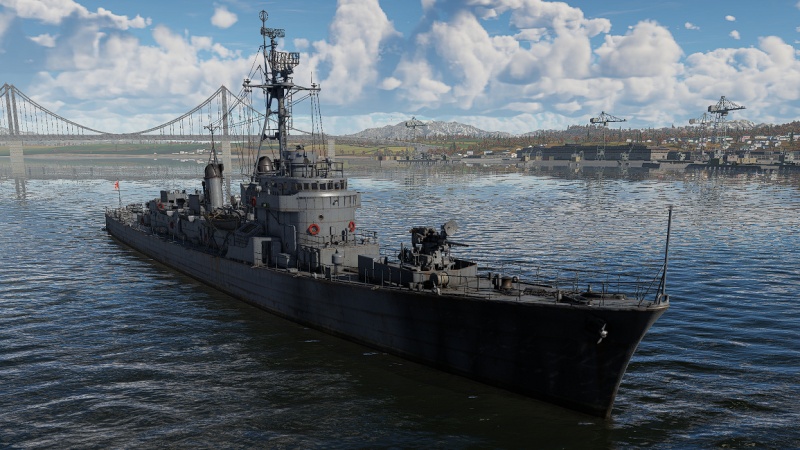 The Akebono-class, Akebono (DE-201) (あけぼの, namesake: Daybreak) is a premium rank IV Japanese frigate with a battle rating of 3.3 (AB/RB/SB). It was introduced in Update "Raining Fire".

The Akebono destroyer escort is one of the first domestic ship classes built by Japan after WW2. Very similar to the frigate Ikazuchi, it has more crew and is faster. The Akebono has high survivability owing to its large complement, and its autoloading 76 mm cannons allow for fast destruction of smaller vessels.

The Akebono is quite tough, having a large crew of 193 sailors, more than even the reserve destroyers. It can shrug off most fire from smaller ships and even take a good beating from destroyers, though it is not recommended to fight them as they easily outgun you. As with any frigate, torpedoes are a big threat, and just one is usually enough to sink it.

The Akebono is quite fast for a frigate, being able to reach 52 km/h in RB, unfortunately that still puts it behind MTBs and destroyers, meaning that it will usually lose a race for a cap zone. It is also rather sluggish at turning, meaning it can be extremely hard to dodge a salvo of torpedoes aimed at it.

The Akebono is armed with 2 x 76 mm guns that both have 360° of rotation, they have a high rate of fire and can fire HE, APHE, and HE-VT shells. the HE can be used to quickly destroy any coastal boat, the APHE to pierce armour and fight larger ships, and HE-VT to destroy planes. The guns unfortunately overheat quickly under sustained fire, and take some time to cool down, meaning that you have to be careful with your shots when fighting groups of ships.

The Akebono is also fitted with a duel 40 mm bofors AA gun at the rear, its high rate of fire can be used to destroy planes or quickly dispatch any boats coming in behind you. It can also be used when you're waiting for your main guns to cool down.

The Akebono is also armed with a large variety of depth charges, 24 forward-facing Hedgehog Mortars, 20 Mk.6 mortar depth charges, 10 on each side, and 12 mk.6 depth charges dropped from the rear. While these have limited combat value, it can be used to take out a small boat that has gotten a little too close to you.

The Akebono is quite a tough ship, at the same BR as the reserve destroyers, it will be facing many smaller vessels that can barely scratch it, while being able to quickly dispatch them with its fast firing 76 mm cannons. It has a large crew that helps it absorb damage, and can even simply sit in a cap zone fighting off any boats that approach it. The biggest threat to the Akebono from these smaller boats are torpedoes, as the sluggish movement can make it hard to dodge a well placed torpedo salvo.

When facing destroyers though, the Akebono starts to suffer, its lack of torpedoes and small calibre guns means that it will always be outgunned, the best strategy to use the fast rate of fire to disable the enemy's weapons, and then either retreat or try to take out the ship piece by piece.

However, the newly formed Navy needed new ships to be able to conduct its tasks effectively and to gain experience for the construction of subsequent ships in the future. As a result, already in 1953 plans were being laid down for the construction of three new destroyer escorts, with two separate designs differing primarily in the propulsion system used. The Akebono, as the single ship of the batch to use traditional steam propulsion, was laid down in December 1954 and was commissioned in March 1956, becoming among the first domestically produced Japanese military vessels to enter service after WWII.

The Akebono served for 20 years with the JMSDF before being decommissioned in 1976. In 1981, the ship was taken apart from scrap and officially stricken from the naval register in 1986.