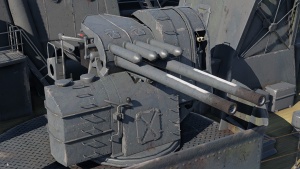 The 127 mm 5 inch/40 Type 89 gun is a Japanese fast-firing gun primarily found as a secondary or anti-air weapon in IJN cruisers, though it's also a primary armament of the IJN Isuzu. Historically it was widely adopted by the navy since 1932, finding use on everything from transport ships, through destroyers to battleships and aircraft carriers. 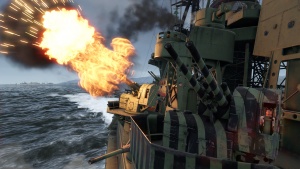 In both anti-air and anti-shipping duties, the Type 89 is a subpar, dated weapon that suffers in all key metrics comparing to its contemporary WW2 rivals, especially when used by the IJN Isuzu or Mogami-class cruisers, where the rate of fire is just 8 rounds per minute. On larger Kongo-class the rate of fire increases to 14 rounds per minute, making it able to put 75% more rounds on target, and a vertical firing angle increases from the +85° typical for the heavy AA to +90°, getting rid of the deadzone above the ship. 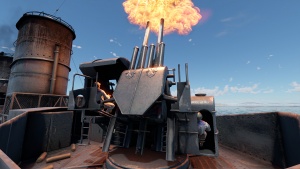 Despite of being subpar relative to the foreign equivalents, the 5 inch/40 Type 89 is still a perfectly capable anti-air gun, with a single hit usually being sufficient to take down even the largest strategic bombers. In the anti-ship role, thanks to being a dual-mount weapon, it's able to quickly take down subsystems of a destroyers, having a good chance of detonating ammunition with a near-direct hit. Any cruiser with armor thicker than 25 mm will be a struggle to take down with your ammunition (relatively common on US, British and German light cruisers, but at the rank IV and higher every cruiser has armor thick enough to stop all available shells.

Modifications to the 120 mm/45 had several goals in mind, most notably increasing the blast radius of an individual shells (what was achieved by increasing the caliber), increasing the rate of fire (to as high as 14 shells per minute), automated setting of the time fuze and in increasing the speed in which vertical elevation could be adjusted (which was done in response to the perceived risk of the dive-bomber attacks).

Over time, however, two key limitations of the gun came to the daylight. Even a highly trained crew missed the fire rate goal, achieving sustained 12 rounds per minute, while a green crew fired only 8 rounds per minute. Also the low horizontal targeting speed turned out to be an issue, though it was eventually resolved with the Matsu-class destroyers by swapping the electric motors from older 10 kW-rated to a newer, 15 kW. Matsu-class was also the first ship to incorporate a single-mount Type 89, as previously all guns were deployed in the twin-mounts.

The gun was used in a wide array of ships, including the Yamato herself, a number of carriers like Kaga, Soryu, Shoukaku, seaplane and submarine tenders, even on the No.1-class landing ships.