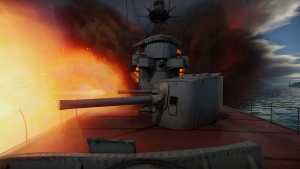 The 140 mm/50 3rd Year Type is a main gun on early Japanese light cruisers. It's a relatively competent weapon, offering good performance against enemy ships, however, being unable to effectively engage hostile airplanes.

The cannon has the lowest calibre among its peers, which gives a significant disadvantage in regards to gunfire. It's not until unlocking the Type 1 SAP shells that the ship is in an absolute disadvantage against other light cruisers using equivalent shells.

Standard HE shell is a relatively good all-rounder, that should be taken to every match, it's useful primarily against destroyers and motor torpedo boats. Type 2 SAP (Tier I modification) shells are comparatively weak, with little direct damage and mediocre fragmentation damage, despite having larger explosive filler than its successor. Their usefulness is limited to taking down engines and transmissions. They are wholly superseded by Type 1 SAP (Tier III modification) that has both higher damage upon piercing components and higher fragmentation damage. Finally, the HE-TF shells are dedicated anti-air shells, however, due to poor vertical guidance (+20° or +30°, depending on the mount, compared to +75° on Type 3 guns) their effectiveness is severely limited. Note that HE-TF shells are inefficient even against wooden boats, as they will explode at a significant distance in front of the target, doing negligible damage to anything that is not moving >100 km/h towards the shell.

Compared to the primary weapons on the ships of the same BR, 140 mm/50 3rd Year Type is grossly outmatched in terms of calibre, which results in low muzzle velocity, TNT equivalents, and penetration capabilities. Lacking firepower is not helped by the number of barrels available on the ships bearing the gun, offering at most 6 shells fired at the same time, which is about average for the BR. The only saving grace is its damage potential per minute with the Type 1 SAP shells, especially when firing from the first-stage stowage, where its damage potential can be theoretically higher than some of its peers.

Concluding, the 3rd Year Type can be considered the weakest cannon among its peers.

140 mm/50 3rd Year Type (140 mm) should be used in gunnery fights, preferably at ranges of ≈8 km, in an attempt to outshoot its opponents thanks to a higher rate of fire than the peers. Due to slow shell speed shooting at targets beyond 11 km is mostly in vain, though given a large supply of ammunition there is not much harm in trying to score lucky hits.

It was conceived as a successor to the 15 cm/50 41st Year Type (50口径四十一式15cm砲), addressing the need for a quick-firing gun that could sustain a fire rate for longer periods of time. This leads to a decrease in calibre and as a result - 16% lower mass of the shells that were now easier to handle by the crew that had to manually load them into the breech. The first capital ship to bear the gun was the battleship Ise, completed in 1917, where the guns were put in casemate-style mountings. Gun was originally planned to be used on a number of light cruisers and capital ships, however, due to Washington Naval Treaty (1922), a number of constructions had to be cancelled or modified, with the guns relegated to the coastal defence. Production was done in two gun factories - at Kure, including the mounts (neighbour city to the Hiroshima) and in the Muroran gun factory (on Hokkaido island), presumably only for coastal defence.[1][2]

Throughout its operational history, a number of shells were used that are not illustrated in the game. Notably, anti-submarine projectiles that were introduced in 1943, the Type 3 Anti-Aircraft shells, better known as Sankaidan (三式彈), and the illumination rounds.[1][3]

Single-gun mounts that we can find in the game had a mass of 21 tonnes, 5.7 of which was the gun with the breech. The operation of the mount was fully manual, with both, horizontal and vertical targetting speed of 8°/s. Guns could be elevated down to -7° and up either 25° or 30°, depending on a specific mount. The maximum range of the weapon was 19 km at 30°.