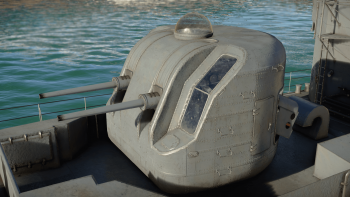 The 3-inch Mark 33 is an American naval anti-aircraft gun, but ironically for being part of a long-serving American naval cannon it is mostly found in the Japanese tech tree where it was introduced on post-war Japanese designs.

In late 1944, the 20 mm Oerlikon and Bofors L/60 were found to be insufficient to defend ships against Japanese Kamikaze attacks and it was eventually settled on developing a 3-inch gun based on a design that was in service since the 1890s. The reason for the 3-inch gun calibre was that they wanted to use radio proximity or VT fuses and the 3-inch was the smallest calibre capable of using these shells. The first gun to enter production in the anti-aircraft role of this capacity was the Mark 24, but later the twin mounts Mark 27 to the Mark 33 which featured a new slide. While the Mark 33 had a higher rate of fire compared to the earlier predecessors and used the same mount as the Bofors, it suffered from a short barrel life. The Mark 33 and the other variants of the gun entered service after the war and had long service history in the United States Navy from the late 1940s until the '80s. The gun also saw action in multiple other navies including Spain, where it is in service to this day, Norway, Japan, and Italy.

During the post-war period, the majority of the Japanese and Italian naval strength was disbanded or destroyed, but the rebuilding of the nations along with the geopolitics of the Cold War made the United States more amiable to the idea of these nations getting reformed navies with former US Navy destroyers serving as the first ships in these new services. For the Italians, they got former Fletcher-class destroyers such as the Geniere. The Japanese meanwhile got the Mark 33 for locally made destroyers such as the JDS Ayanami (DD-103) which was the first ship to mount these guns and later destroyer escorts such as the Ikazuchi-class.