Difference between revisions of "TAM 2IP" 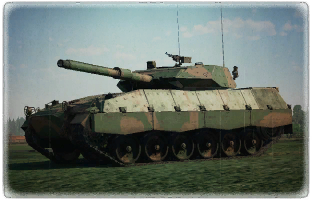 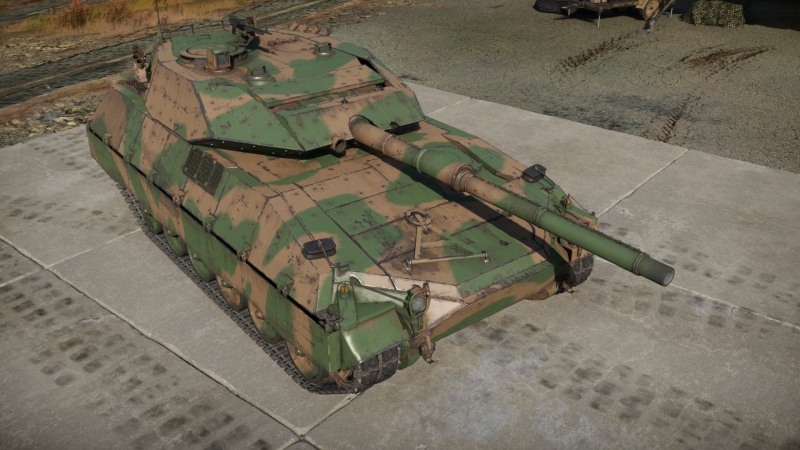 The Tanque Argentino Mediano 2IP is a premium rank VI German light tank with a battle rating of 8.7 (AB/RB/SB). It was introduced in Update "Red Skies". Sitting between TAM and TAM 2C in terms of performance, this tank is essentially an earlier TAM model with access to more modern ammunition and add-on armor for increased protection.

Base armor of TAM 2IP is very thin, just 11mm plate angled at 74° on the upper frontal glacis, and 15mm of armor on the sides. Turret is not something to boast about either - the strongest plate being a gun mantlet with a 30mm plate and sides being 25mm thin.

On the bright side, the 2IP version is fitted with Iron Wall add-on composite armor. This variable thickness armor package dramatically increases effectiveness of armor against chemical munitions, but does little to protect against kinetic penetrators.

Most noticeable increase in protection is on the upper plate of the hull - even newer HEAT rounds and older ATGMs may struggle to penetrate the hull armor.

Sadly, add-on protection on the turret is not enough to defeat those same munitions.

Players also must be aware of the giant weak spot that is the driver's area - it is only 11mm plate angled at 74° and it is not protected by add-on armor, allowing vehicles like Dardo to get through.

While TAM 2IP is now resistant to 12.7mm rounds on the hull side, overall side protection remains poor, as it can still get easily penetrated by anything larger than 12.7mm.

Both gunner and commander are protected by the transmision and the engine (similar to Merkava tanks); while that won't protect them from most kinetic munitions, it can negate shrapnel from older chemical and HESH rounds that manages to get through add-on armor.

Driver is very vulnerable as he sits behind an 11mm thin plate angled at 74°, with a first-stage ammo rack and loader directly behind him. Driver's area is not protected by add-on armor either.

Even with additional protection, TAM 2IP suffers no decrease to its mobility when compared to its tech tree counterpart; thus is more mobile and agile than its main competitor, Leopard A1A1. This mobility allows TAM 2IP to perform many different roles, be it flanking, scouting, rushing favorable positions or relocating.

As a premium vehicle, TAM 2IP comes with all modifications unlocked.

Main armament consists of FMK.4 Modelo 1L gun; fully stabilised gun that is standard to the TAM family. Unlike TAM however, it has access to DM33, 3rd best NATO round available for 105mm guns and a very potent round at its BR. TAM 2IP also comes equipped with a laser range finder - this gadget allows it to acquire targets distance, thus allowing long range shots, immensely fast.

TAM 2IP essentially plays as its tech tree counterpart. While it can still perform well as a regular main battle tank, using it this way would be just wasting its potential. It's a fast, potent flanker, but with the addition of a powerful DM33 round, TAM 2IP is also a potent sniper.

Players should abuse TAM 2IPs mobility to reach advantegous positions and start picking off players. DM33 is overkill at BR 8.7 (only T-62M-1 providing better performance) and coupled with laser range finder, TAM 2IP can snipe really well. While it can't fight as well in hull down positions as Leopard A1A1 due to slightly worse gun depression, it can still make great use of cover, as it negates its biggest weakness - armor.

Due to TAM 2IPs excellent mobility, stabilised gun and powerful round, TAM 2IP is a potent flanker. Add-on armor allows it to shrug off most autocannon fire from IFVs, as those will be common flankers at this BR. Coupled with scouting ability, TAM 2IP employing hit and run tactics on flanks can become enemy teams worst nightmare.

While the TAM 2IP performs great at longer ranges, its performance is below average on CQC maps with corridors and streets that do not allow it to exploit its mobility, like those found on Advance to Rhine. Better armoured tanks in general outperform TAM 2IP by wide margin in these environments. Players should focus on ambushing enemy tanks. TAM 2IP turret placement on the back of the tank and acceleration can be exploited in this scenario well - by reversing out of cover, your engine is still protected while you expose only a small part of your tank. Another viable option is to support their allies. Let them take a shot, and as soon as you see the enemy tank return fire, lunge forward and send the enemy back to the garage.