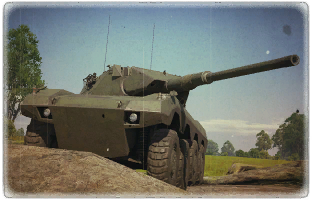 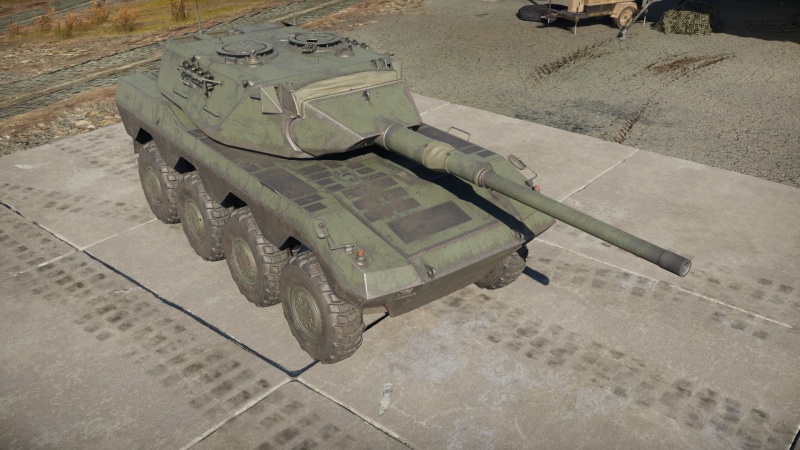 The Radkampfwagen 90, being a light tank, is surprisingly survivable. When talking about the survivability of this vehicle, it is best to separate the tank into two parts, the turret, and the hull.

The hull of the Radkampfwagen 90 is the weakest part of the tank. While the hull does have "spaced armour", this is deceiving, as this will only protect you from HESH shells, and at 9.0, HESH is effectively useless, and in any case, most players will not be using it as their main shell. When hit by HE shells, the hull of the Radwagen is vulnerable to overpressure, but when hit with APFSDS, the tank can possibly survive a few hits, as long as the ammo is not detonated. In conclusion, the Radwagen's hull, at least from the front, can protect against non-apfsds autocannons, but the sides will be easily penned by even the Russian 14.5 mms, and the rear by American .50 cals.

The turret of the Radkampfwagen 90 is surprisingly bouncy and well armoured. It features, at least on the front and sides, spaced armour, but as mentioned before, this will only protect you from HESH and small caliber AP and HE rounds. The turret face also features many weird angles, that have the possibility of ricocheting enemy rounds off of the sides. Another thing to note is that because of the large amounts of empty space in the turret, coupled with the lower damage of modern rounds, can allow you to survive multiple hits to the turret, even sometimes with enemy shells doing no damage. However, as with any armour, this should never be relied on, and should only be used as a last ditch effort.

In conclusion, you can take hits sometimes, but in any case, it is better to not get spotted or hit in the first place, and to get the first shot off.

Unlike other light tanks, with the exception of the turret ring, your front is immune to all heavy machine guns and most autocannon rounds (from IFVs and SPAA for example)!

This allows you to engage such vehicles with relative ease and destroy them whereas other light vehicles would get penetrated killed.

The L7A3 105 mm gun mounted on the Radkampfwagen 90 is the same as the gun that the Leopard 1 series uses, and is the same in many aspects. Similar to the Leopard A1A1, the gun is equipped with a two-plane stabilizer allowing for firing on the move. The gun also has faster targeting speed at 5.1 degrees per second compared the the Leopard 1's 3.1 degrees per second in the vertical plane, but the turret traverse speed of the Radwagen, or horizontal targeting speed, certainly leaves something to be desired. A unique thing about this particular L7 is that it fires one of the best L7 APFSDS shells in the game, with higher penetration than even the first Rheinmetall 120 mm L44 APFSDS shell.

Ammo racks of the Radkampfwagen 90

The coaxially mounted 7.62 mm MG3A1 is, in most situations, not useful. While being able to "blind" opponents by shooting at their optics, as with any MG, and able to easily dispatch of vehicles with exposed crew that have uptiered themselves, such as the M56, 2 factors really hold this MG back from being truly useful. These are:

The Radkampfwagen 90, due to it's speed, may be used in a flanking manner, being able to go around the enemy and surprise them where they do not expect. When flanking, it is recommended to use roads if possible, as the Radwagen is a wheeled vehicle, and rough terrain will slow it down. However, even offroad, the vehicle is still capable of speeds that are much higher than many other contemporary MBTs. The scouting ability of the Radwagen can also be very useful, as it can help you support your team without risking the possibility of being spotted/noticed by firing your gun. The only downside to this playstyle is that the Radwagen is unusually large in size, most notably the hull, which makes it easier to be spotted.

The Radkampfwagen may also be used in a playstyle of a fast MBT. While the hull of the Radwagen is weak, not really well armoured, and prone to overpressure damage, and easy to hit, the turret of the vehicle has multiple well angled and very bouncy plates, both interior and exterior, which allows the turret to sometimes take hits without damage, or even ricochet some shells. This bouncy turret can be used in a hull-down position, like a ridgeline, or a pile or rubble. However, it is important to note that even though enemy shells have a chance of bouncing, it is best not to rely on this, and to use the vehicle's stabilizer and situational awareness to get the first shot off.

In Arcade, the playstyle of the Radwagen changes a bit. Due to markers that will tell everyone where the Radwagen is, flanking is not as good of a strategy. However, the vehicle retains all other advantages, and due to the slight engine boost in arcade, will be able to hit very high speeds even offroad. Of course, enemies will also be faster in general, which makes this extra speed redundant. The vehicle's scouting abilities are useful in aiding the team. Your gun, for its tier, is good, and its decently low shell drop will aid in those long range shots that are common in arcade. Just remember - this is a light vehicle in a game mode where it can't really hide, so when playing this vehicle in Arcade, be cautious.

In Realistic, the Radwagen's speed and scouting abilities are even more prominent. As mentioned above, it can flank around the enemy with stealth, and either scout enemies for the team or quickly knock them out with its very punchy gun. The team also will benefit from its scouting abilities, as in a game mode without enemy markers, intel on the enemies whereabouts can be crucial to the team's victory.

In the early 1980s, the German Federal Ministry of Defence, known as the Bundesministerium der Verteidigung (BMVg) in German, initiated a program to produce an eight-wheeled combat vehicle. The reason for the program's creation was the success of the Spähpanzer 2 Luchs and the Transportpanzer Fuchs, along with vehicles operated by other countries, such as the French AMX-10RC. Daimler-Benz was tasked with the construction of such a vehicle, and the requirements were for an 8 x 8 wheeled combat vehicle with a weight of less than 30 tons and a powerful armament and adequate armour. The first prototype was built in 1983, and was first known as the Demonstrationsfahrzeug Rad (demonstration vehicle wheeled) and then the Experimentalfahrzeug Rad (8×8), meaning experimental vehicle wheeled (8×8). It finally received the name Radpanzer 90, and it is known as the Radkampfwagen 90 in War Thunder. The final production model was completed in 1986. It featured a rear-mounted engine, had an independent suspension for the wheels, and the turret was that of the Leopard 1A3. The Radpanzer 90 never entered service, but the information gathered from the program was later used in the development of the GTK Boxer wheeled vehicle.

In the early 1980's, the West German Ministry of Defense sought to procure a wheeled tank themselves, after observing the success of similar designs of other nations such as the French AMX-10RC. The mostly positive experiences made with the introduction of the wheeled Luchs in the years prior, further convinced the German military of this idea.

As a result, the Ministry of Defense tasked the Daimler-Benz company, who had also been involved in the development of the successful Spähpanzer Luchs before, with developing this new wheeled tank. By late 1983, the first mock-up was created and the project received its official name - Radkampfwagen 90, or alternatively, Radpanzer 90.

The first, and what would end up being the only prototype was constructed in 1986, subsequently undergoing various trials. Despite proving itself as a highly capable vehicle and producing favorable test results, the dissolution of the Eastern Bloc and its Warsaw Pact alliance, caused not only the need for a vehicle such as the Radkampfwagen 90 to disappear, but also for a valid justification of accepting its high production costs. As the direct result of a combination of all these factors, further development of the project was suspended in the late '80's - early '90's, with the Radkampfwagen 90 project being ultimately abandoned.