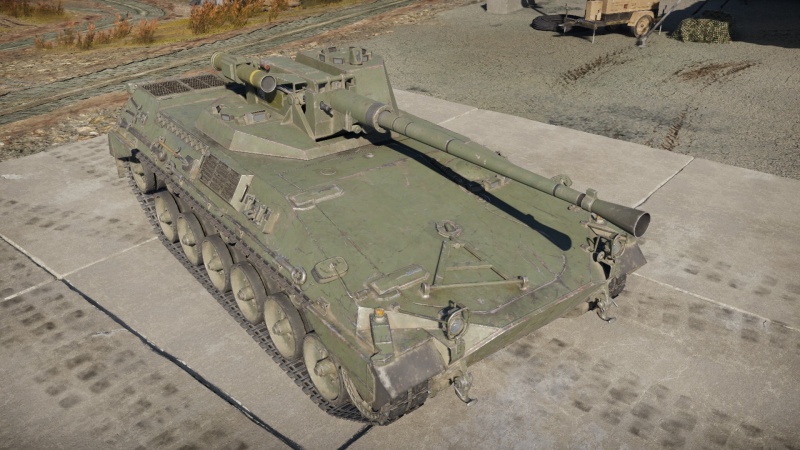 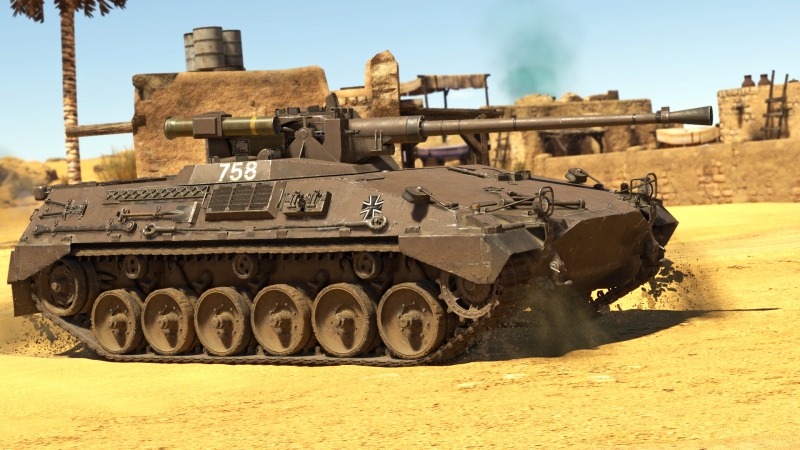 At first glance, the Begleitpanzer 57 may be confused for a SPAA due to the light armoured chassis and the rapid-firing 57 mm autocannon. On the turret is also a TOW launcher with SACLOS guidance, meaning it will automatically align itself with where the crosshair is pointing.

As it shares the same chassis, the Begleitpanzer 57's construction is similar to that of the Marder A1-, with light armour all around and sides that heavy machine guns can penetrate. The main cannon's exterior mounting also means it can be disabled by machine guns and shrapnel.

As a light tank, the Begleitpanzer 57 carries great firepower and high mobility. The 57 mm autocannon has a penetration power close to that of the ZSU-57-2's, but the addition of a TOW launcher system makes this vehicle able to engage heavier targets.

57 mm Bofors L/70 Mk.1 cannon
Two-plane stabilizer
Reduces the swing of the gun in two planes while moving
Autoloader
Automatically feeds projectiles into the breech. The speed does not depend on the skills of the loader
Ammunition148 rounds
First-order48 rounds
Reload0.3 s
Vertical guidance-8° / 45°
Main article: Bofors L/70 Mk.1 (57 mm) 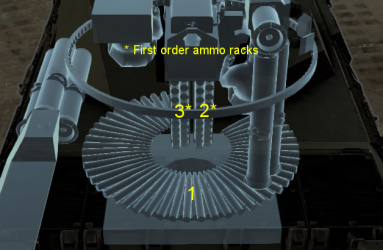 Ammo racks of the Begleitpanzer 57 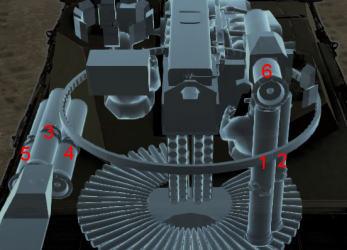 Ammo racks of the Begleitpanzer 57

The Begleitpanzer 57 is a very capable light tank and support vehicle. With proximity fuse HE shells in its 57 mm cannon, it can effectively engage air targets, and can destroy enemy IFVs and even MBTs with its high-penetration rounds. However, when shooting at enemy planes, it is best to wait until they are close before firing, since the vehicle does not have a very high ammo count. Alternatively, the vehicle carries missiles which can be used very effectively to destroy both helicopters and tanks at long ranges. The missile's travel time must be taken in to consideration, but it is nice to have when the enemy is too far away to engage with the 57 mm cannon.

The Begleitpanzer's main cannon can sometimes destroy MBTs from the front, but does damage much more consistently when shooting the enemy's weaker armoured side. For this reason, it is often wise to adopt an ambushing or flanking playstyle. This is helped by the vehicle's small profile and good mobility. It is easy to reach good firing positions and manoeuvre around the enemy quickly and without being seen. (And since the vehicle has poor armour, avoiding being seen will be very important for survival).

While the cannon shares its calibre with the Soviet 57 mm S-68 cannon, it is quite different in performance with a slower rate of fire and a lesser accuracy. The penetration power is considerably inferior compared to the APCBC belt of the S-68 at 1 km distance. The HE round can be completely ignored as it can not reliably go through the side armour of most MBTs it faces. All of this means that long range firepower relies mainly on your ATGM, of which you only have 6. Upgrading to the better ATGM is highly encouraged due to its increased penetration.

At the end of the day, the Begleitpanzer can be played as a light tank scout. It can't engage the enemy front-on, but it can be a valuable asset to the team and is lethal when played in the correct positions. Be sure to use the scouting ability to help friendly players locate enemy tanks. During night battles, the NVD modification will make scouting both easier to do and even more helpful to the team.

The armoured fire-support vehicle Begleitpanzer 57 is a combined project from the Thyssen-Henschel and Bofors companies, developed for scouting and destroying lightly armoured Soviet APCs and IFVs without needing tank divisions for support. To achieve this, the engineers chose the chassis of the German Marder infantry fighting vehicle and installed an adapted version of an automatic 57mm ship cannon on it. Moreover, for fighting with enemy tanks, the Begleitpanzer was equipped with American TOW guided anti-tank rockets and a reloading system for the rocket launcher was developed and placed inside the vehicle's hull.

The result was a fast and light infantry fighting machine capable of destroying enemy tanks and armoured personnel carriers at impressive ranges. At the same time, it could also land a small group of 3 infantry scouts. Sounds like a great idea! But it was the very universality of the Begleitpanzer 57 that prevented the vehicle from going into series production. The Begleitpanzer 57 turned out to be too lightly armoured for an infantry fighting machine, and too heavily armoured for a scout tank, plus it was not adapted for overcoming significant water obstacles. The military commission rejected the experimental prototype and the project was closed.

Light tanks based on the same chassis