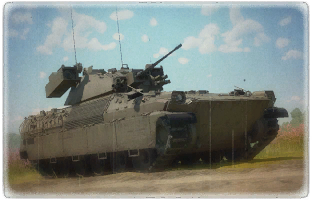 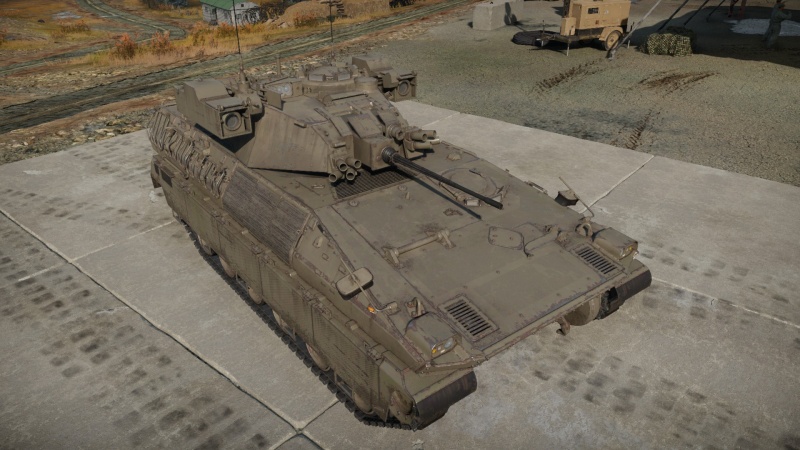 The Veicolo Corazzato da Combattimento DARDO is a rank VI Italian light tank with a battle rating of 9.3 (AB/RB/SB). It was introduced in Update "Red Skies".

The survival of the Dardo is characterized by good armour and crew. The armour is made of rolled homogeneous armour and aluminum that make up an effective armour of 77 mm at the top of the hull, while at the bottom, the most vulnerable part, the armour amounts to 46 mm. This armour is very weak, it can barely defend against 20 mm shells.

Inside the Dardo there are 3 crew members: the driver, the commander and the gunner.

The engine is at the front of the vehicle and is separated from the driving area with a rolled homogeneous plate of 6 mm. This plate that separates the driver from the engine serves to increase the vehicle's resistance against shrapnel and fire.

The Dardo has an Iveco V6 turbocharged diesel engine, capable of delivering 520 HP. This powerful engine is able to push the 23 ton Dardo to a speed of 70 km/h spread over 8 gears on almost any flat terrain: road, dirt, snow and sand. Its reverse gear is also good, -32 km/h. With this mighty engine it can climb slopes of up to 60%.

The main armament of the Dardo is a 25 mm Oerlikon KBA autocannon. The 25 mm Oerlikon KBA is used as an anti-aircraft weapon in systems such as the sophisticated DIANA in a twin installation, or in armoured vehicles such as the Dardo IFV, the self-propelled anti-aircraft artillery SIDAM 25 and others in single, twin, or quad installations and is also embarked on naval units where it is used as a CIWS.

In-game, this formidable gun is the second highest performing 25 mm gun. With its formidable cadence of 560 rounds per minute and a projectile that can pierce up to 92 mm of armour, the Dardo is capable of rapid and very effective attacks. It is recommended to engage enemies from the side for greater efficiency.

Ammo rack of 25 mm KBA of the VCC Dardo.

The BMG-71 TOW entered service in 1972 with the US Army during the Vietnam War. This ATGM was a real success both operationally and commercially. The missile is based on a 127 mm HEAT warhead capable of penetrating up to 600 mm with a velocity of 345 m/s.

The Dardo can be equipped with the TOW-2 and TOW-2B variants. The TOW-2 is present on the stock tank. It penetrates 800 mm and has a speed of 329 m/s, very effective against any vehicle that does not have explosive reactive armour.

The TOW-2B is a researchable modification. Unlike the TOW-2, the 2B has the ability to detonate above the tank and direct its explosive power downwards. This allows the missile to completely destroy the tank from above ignoring all the ERA and NERA armour that a conventional ATGM would face from the front. The TOW-2B however is much slower and less penetrating than the TOW-2, penetrating 430 mm and a velocity of 309 m/s. 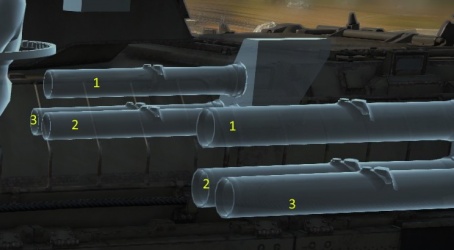 Ammo rack of ATGMs in the VCC Dardo.

When playing the Dardo, one of the best playstyles for it is either using it as a support or as a flanker. You should attempt to always have a good line of sight where you can take enemies off guard, to maximise the effectiveness of your armaments. One example being that the Dardo at times can be used effectively in urban combat. If you pick a side street to set up, when the enemy goes past, hopefully without seeing you, you will be able to hit them in the side with either your main cannon or with your ATGM. At the start of a match it can prove to be a very effective first spawn in the hands of an experienced player, as enemy players might not expect such a vehicle to cause them troubles early during a match.

While stock, your main way to be effective is to scout enemy players and take them out from long ranges with the use of your TOW-2 ATGM. Once you research the important modifications for this vehicle (APFSDS, TOW-2B, Thermals) then you may begin to play more solo and without having to rely on your teammates too much. Such modifications allow the Dardo to really be a devastating IFV that at times the enemy team won't have a proper counter, to deal with the issue. With TOW-2 you are easily able to take out enemies with one good placed hit, but won't always be reliable as some enemies can prove to be tough, and will be able to withstand a hit. Thankfully the Dardo has 2 launchers which mean that you can fire in quick succession, hopefully being enough to allow you to continue staying in the battle.

However, with the TOW-2B modification unlocked, Dardo's offensive capabilities are greatly improved, as the ATGM has the ability to attack enemies from the top of their turret roof, where for most tanks the armour is at its lowest. It can also be used to easily compromise enemy sniper positions, since people hiding behind cover are no longer a threat and must seek a better position where your ATGM can't affect them. Enemy players will usually be taken off guard when presented with a TOW-2B and that can also be used as a distraction for you to push and take an enemy out when they are damaged or confused. It's also good to note that if you are playing in your support role, the Dardo's scouting ability will be extremely useful for both you and your team.

In terms of its main weapon, the Dardo has a 25 mm Oerlikon-Buhrle cannon, which is able to use APDS and APFSDS. Its stock round for the 25 mm cannon is not too good at dealing with enemies but once the APFSDS round is unlocked, the Dardo can easily make short work of MBTs and light vehicles frontally or from the sides. However due to the Dardo's poor survivability, it is best advised that you stick far away from enemies and try pick them off with your TOW-2B. Generally speaking, just act as if the vehicle can be killed from anywhere, by any round. Its main cannon should only ever be used when you are in immediate danger, such as when a enemy helicopter is above you or when another enemy team ground vehicle has breached your defences. Dardo doesn't carry a lot of ammunition for either of your weapon systems so pick your targets and evaluate what place is the best to take out your enemy whilst not consuming too much of your ammunition.

During the late stages of the Cold War, OTO Melara, assisted by IVECO, had been designing a set of new multi-role armoured fighting vehicles in the hopes that enough interest would be generated to get the vehicles picked up either by the Italian army or by possible foreign customers. Several designs had been proposed (mainly to replace the ever-ageing M113 APC). The first attempt was the C-13 APC, which generated several variants, including an IFV and TUA version. It was ultimately never picked up likely due to political reasons, however what was used from the C-13 program would be re-used in future IFV projects, mainly the OTO Melara AV-90 and, the VCC-80 "Dardo". 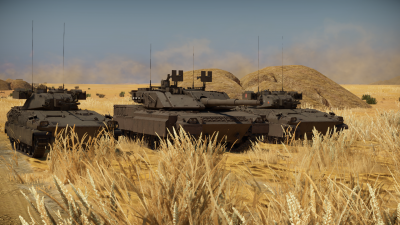 The Dardo had a troubled development cycle. Originally OTO Melara had initially proposed an initial variant known as the 'VCL-80', which would have shared many aspects from the C-13. It originally was supposed to feature a MILAN ATGM launcher similar to the M3 Bradley series of vehicles. The VCL-80 stayed on paper, however shortly thereafter in the early 1980s a new and refined design came out, only known as the VCC-80 (not to be confused with the production VCC-80 "Dardo"). In 1982 the Italian army would place a contract for the VCC-80, which would be produced in very small pre-production/prototype batches, and underwent a series of changes during its development cycle. The VCC-80 would be tested with a high velocity medium support gun, the same gun tested years prior on the Fiat 6616. What would actually interest the Italian army would be the version fitted with a power-operated turret, mounted with a 25 mm Oerlikon-Buhrle cannon (capable of 600 rpm, and fed with 200 ready rounds stored in the turret, with extra rounds stored inside of the hull). In addition, it was also given the ability to equip itself with TOW ATGMs.

The general configuration of the VCC-80 would be conventional, being similar to other contemporary infantry fighting vehicles. What sets it out is the design, it being very well self proportioned and well executed. The hull as well as the turret of the VCC-80 is welded from plates of aluminium alloys (5083 and 7020 type). During its development, among the changes to the vehicle would be the fire control system, originally it had access to the Officine Galileo TURMS, present on the C1 Ariete and B1 Centauro. Eventually it was decided to use a mix, and the introduction of the Kollsman day/night sight which would be present on the the final version of the vehicle and subsequent production variants. The powerplant consists of an Iveco V6 turbo-charged after-cooled diesel, capable of 512hp (382.2 kW), coupled with an Iveco Fiat ZF type automatic transmission system with four forward/two reverse gears. The commander would be provided with six periscope sights, with 360° field of view. The cupola can be further fitted with 'JANUS' panoramic stabilized sight, although this is seen rarely. Additionally, a laser rangefinder and a thermal imager is provided for the gunner. Eventually the Italian army after extensive testing would order a grand total of 300 production units of the VCC-80 in 1988, designating it the VCC-80 "Dardo", and later downsized to 200 units due to the end of the Cold War. They'd be delivered through the following years and the final production vehicles would be delivered in the early 2000s.

Since then, the Italian army have not upgraded the vehicle much, in 2005 TOW-2B and TOW-2A ATGMs would be ordered to up-arm both the Dardo and the A129 Mangusta, mainly done due to the old TOW variants such as I-TOW being a bit too outdated for the modern setting. They would also at one point acquire a license from Germany to produce PBM-09 25 mm APFSDS to accompany the Dardo. Dardos are currently in use inside of the majority of the 'Bersalgiere' regiments. Since then, the VCC-80 "Dardo" has partaken in pretty much every theatre of war that Italy was involved in, such as in Afghanistan, as well as Italian United Nations missions in Lebanon. In terms of upgrade programs, there was an attempt once to do such thing. During Eurostatory of 2010, an international exhibition of the defense and security sector that takes place every two years in the Paris-Nord Villepinte exhibition center, would have Italy present their defense vehicles and items like usual, including the Dardo. This time however would be the first time the Dardo IFV was seen in the configuration CIO presented, this specific configuration would allow the Dardo IFV to have an unmanned HITFIST-OWS (Overhead Weapon Station) 30 mm cannon, which would also be able to be paired up with 2 Spike ATGM launchers (the launcher was also capable of using Kornet and INGWE). However following in-depth studies conducted jointly by the Army and industry, the poor cost/effectiveness ratio of the vehicle modernization emerged, and therefore, in 2016, the VCC-80 "Dardo" modernization program was abandoned in favour of a new platform that can respond to the needs of the Armed Forces. 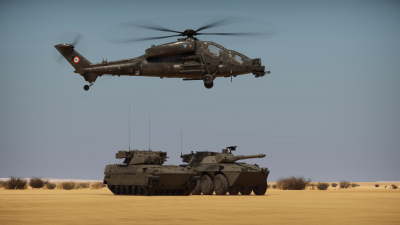