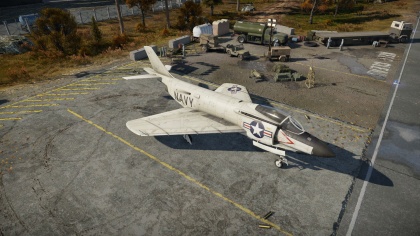 The F3H is quite possibly the most fun and enjoyable jet to play with american naval jets, that is once fully spaded (fully upgraded modifications), On first glance the jet may look big and slow and it may be in some situations, but the turning abilities and acceleration are a completely new breathe of fresh air for american naval jets.

You are no longer confined to the slow acceleration, slower turns of the F9F series, but are almost if not completely capable of going tip of the spear with full afterburner and charging the enemy, that is with a smart head on charge with your subsonic jet. As to note the leading edge slats can be controlled manually by engaged combat flaps (pressing F by default for flaps) which take your already amazing elevator control to a next level even at lower speed!

When flying this jet you can really stretch your legs with different tactics: you have great ordinance for Ground battles, you have great air to air performance. The mix of the two major combat scenarios make this jet a truly universal naval jet with just about any play style for anyone available in someway.