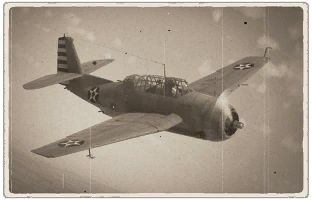 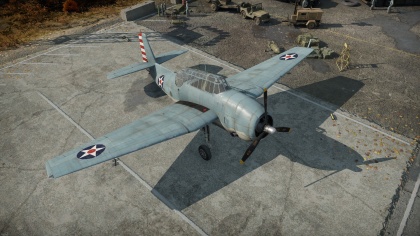 The TBF-1C Avenger is a rank II American naval bomber with a battle rating of 2.0 (AB) and 2.7 (RB/SB). It has been in the game since the start of the Open Beta Test prior to Update 1.27.

The TBF-1C is armed with:

The TBF-1C can be outfitted with the following ordnance:

The TBF-1C is defended by:

As with all torpedo bombers, maintaining low altitude, high speed, and fighter cover are all recommended. The optimal distance for launching a torpedo is 1 km from the target. Targets should be engaged from directly ahead or astern, making "leading" the target much easier. If torpedo bombing is not an option, the plane can carry bombs for attacking ground targets.

The Avenger lacks much significant armament, but in a pinch it can serve as a fighter. The aircraft is not particularly fast or manoeuvrable, but, continuing the trend among mid-tier American aircraft, is extremely durable.

Fly low and fast, head towards your target, drop your ordinance and bug out. However, if there are no hostile fighters in the area, destroy some enemy ground installations, e.g. AA, light vehicles, landing crafts and anti-tank positions.

Battle Of Midway - June 4, 1942.
First Combat mission of the TBF-1 was on June 4, 1942 at the battle of Midway. Only six TBF-1 were available, for the start of the battle they were attached to VT-8. All apart from one were lost.

Eastern Solomons - Aug. 24/25th 1942
Admiral Yamamoto's infamous naval counter-strike 24th of August. The opposing naval forces met; the US Navy had only two carriers: Saratoga (VT-8) and Enterprise (VT-3). The Imperial Japanese Navy (I.J.N) had the carriers: Shōkaku, Zuikaku and a light carrier Ryūjō. By August, TBF's had been delivered to the two ships.
26 TBF-1 Avengers from VT-3 and VT-8 were launched. Their torpedoes helped to sink the light carrier I.J.N. Ryūjō. Seven Avengers were lost.

The TBF Torpedo Bomber was created to replace the outdated Devastators, which suffered from insufficient speed and short range. The TBF, also known as the Avenger, had good range and load capacity and the ability to carry cargo inside the fuselage. It was an ideal solution for a carrier-based transport aircraft. During the war, the Avenger earned a reputation as a very accurate bomber.

One unique feature of the TBF-1 was its wings. After the plane landed, they were folded back onto the side of the fuselage and parallel to it. This was done to solve the problem of the insufficient height of aircraft carrier hangar decks, which conflicted with standard upward-folding wings. Thanks to hydraulic actuators, the wings could be retracted or extended by the pilot in just a few seconds, without any help from ground personnel.

The TBF was widely used during World War II by not only U.S. forces but also those of Great Britain and New Zealand. In Great Britain, the aircraft was named the Tarpon and was one of the most extensively used British torpedo-bombers.