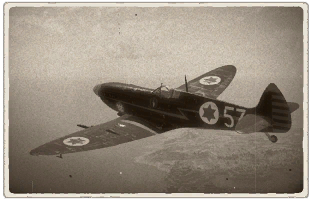 Spitfire LF Mk IX Ezer Weizman's is a premium gift rank IV Israeli fighter with a battle rating of 5.3 (AB), 5.7 (RB), and 5.0 (SB). It was introduced as a premium pack in Update "Ground Breaking".

Spitfire LF Mk.IX Weizman's (Israel) can be outfitted with the following ordnance:

This plane is a formidable opponent when going against it. It has an astounding climb rate with a decent armament and still maintains that superb turn time that spitfires are known for. Because it is a low altitude variant, it is wise to stay below 5,000 m to get the best performance possible. Remember to use your supercharger when above 2,000 m: it will grant you a significant performance increase. Climbing is a valid strategy when you first spawn in because of your amazing climb rate. You are nearly guaranteed a height advantage over everyone. Maintain your altitude and lure enemies into a turn fight as there isn't anyone at your battle rating that can outturn you, the exception being a couple Japanese planes. Although this plane is a good turnfighter, exploiting your turn rate too much can lead to bleed a lot of energy and become an easy target for other planes. This plane is reasonably fast but for sure not the fastest at its rating. Do not head on with this plane. The 20 mm Hispano cannons are inaccurate, and jam quickly, even when fully upgraded. Instead, dodge and start a turn fight where the Spitfire will almost always come out on top.

Shortly after the establishment of the State of Israel, its new Defense Ministry began work on the formation of a more organised air force as a branch of the new Israel Defense Force. The first planes purchased were Czechoslovakian Avia S-199s - a partially-improvised version of the Bf 109 - but these proved to be inferior to Egyptian Air Force Spitfires. Simultaneously, Israel began acquiring its own Spitfires (primarily surplus planes previously given to Czechoslovakia by Britain) in a series of politically - and functionally - complex operations. By the end of the war, most combat aircraft in the Israeli Air Force (IAF) were Spitfires of whatever models could be acquired.

The Black Spitfire originally arrived in Israel in November 1949 (months after the official end of the war), and initially bore the number 2057. It served in the 101 fighter squadron. By this time, Spitfires were only used as bomber escorts and for reconnaissance flights. Most Israeli Spitfires were eventually sold to Burma in 1954; however, Ezer Weizman - then commander of the Ramat David air force base - argued to keep several of the aircraft in Israel. He ordered one of those aircraft, including number 2057, to be painted black, to match the colour scheme used by his former British airbase commander in Rhodesia during World War II, when Weizman trained as a pilot in the RAF. The plane was renumbered to "57".

Weizman kept the aircraft for training purposes in the IAF, but it was unofficially understood to be his own personal plane. Weizman later became Commander of the IAF and eventually retired, but nevertheless kept flying the plane during multiple IAF air parades over the following decades. The plane became famous in Israel as "Weizman's Black Spit", and was closely associated with the man. Weizman went on to become a member of the Israeli parliament, its Minister of Defense, and finally the President of the State of Israel. During his funeral in 2005 the Black Spit was flown over the burial ceremony.

The Black Spit is one of about 60 Spitfires that are still operational today. When not undergoing maintenance, it is occasionally kept on public display at the IAF Museum near Be'er Sheva.