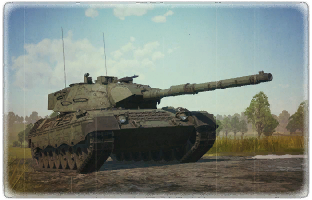 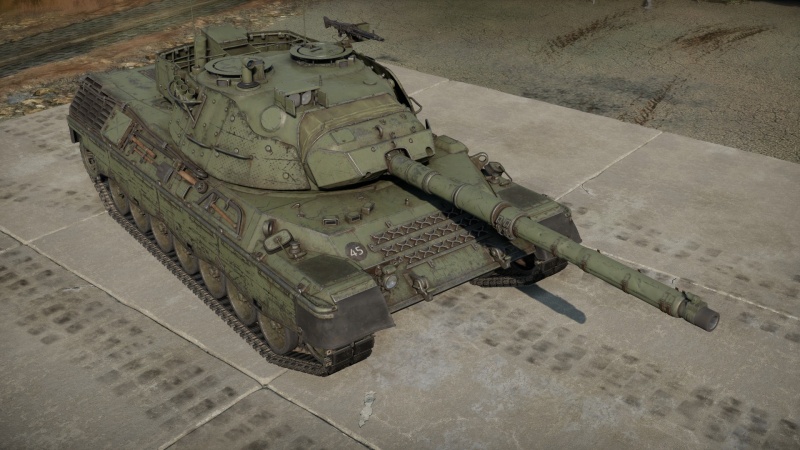 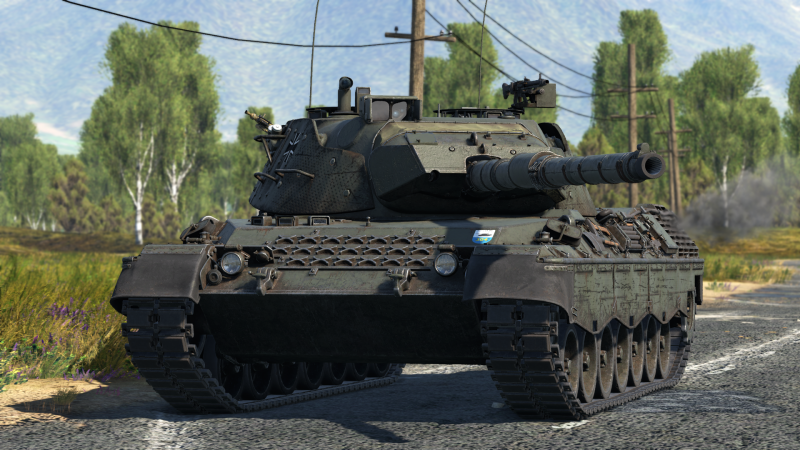 The Leopard 1A5 is a rank VI German medium tank with a battle rating of 9.0 (AB/RB/SB). It was introduced in Update "New Power". The Leopard 1A5 is the final evolution of the Leopard 1 family, and thus offers some very competitive tools at the players' disposal.

The Leopard 1A5, being a further development of the Leopard A1A1, does not differ much from its predecessor in terms of armour. The Leopard 1A5 prioritizes firepower and mobility over the survivability of the tank.

The armour in the frontal arc is reliable against many of the autocannons found on IFVs at the rank, but occasional rounds can penetrate the turret ring. Side armour can be reliably penetrated by autocannon fire, thus it is vital to keep the front of the armour towards the enemy.

Chemical and kinetic rounds from main battle tanks and other vehicles should have no problem to penetrate Leopards armour when they hit centre mass.

Looking at the Leopard from the front, 3 out of 4 crew members sit in almost straight line on the left side of the tank, thus potentially allowing it to get knocked out by a well-placed shot. On top of that, Leopard's biggest ammo rack is located on the right side of the hull, protected only by a 70 mm thin frontal plate angled at 57°. Thus Leopard's hull presents a highly rewarding target and players must avoid getting shot in the hull at all costs.

On the other hand, Leopard's height is just slightly taller than T-72 by a few centimetres, and the gun can be depressed to -9°, allowing Leopard 1A5 to fight well on uneven terrain.

The Leopard 1A5 shares almost the same mobility as its predecessor, with only negligible loss of HP per ton. Excellent agility, above average speed and great suspension allow players to reach favourable positions and relocate quickly in case of emergency.

Players focus should be on firepower upgrades. After Parts and FPE, one should go for the DM23 round, as most tanks at this rank have either composite armour, ERA or both, making stock HEAT rounds very ineffective. After that, players' focus should be on getting thermals, which help tremendously with acquiring targets and it is impossible to fight at night without them. Lastly, players should go for DM33 and laser rangefinder. Those make the Leopard 1A5 a powerful sniper and level its fighting chance against most opponents.

The Leopard 1A5 mounts a late-generation fully stabilised L7 cannon, which is pretty standard at this rank. It also has access to standard ammunition selection, though one thing to note is that it has the option to equip lethal DM33 rounds, which are the third best NATO rounds available for 105 mm guns (after M900 and DM63). 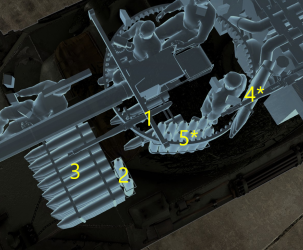 Ammo racks of the Leopard I (identical)

With addition of laser range finder, more powerful round and thermal gunner optics, the Leopard 1A5 can become a very potent sniper on open maps. Players should exploit the Leopard's mobility, low profile and handy gun depression to reach favourable hull down positions and start picking off targets. Entrenched sniping the Leopard 1A5 becomes a nightmare for enemy tanks trying to cross its sight line, as this playstyle allows players to negate their biggest weakness: the lack of armour.

The Leopards can flank well, but as thermal sights and laser range finders are becoming more common at the Leopard 1A5's BR, one must adapt certain flanking tactics:

Sadly, while the Leopard 1A5 performs great at longer ranges, its performance is below average on CQC maps with corridors and streets that do not allow to exploit the Leopard's mobility, like those found on Advance to Rhine. Due to lack of armour, IFVs with high rate of fire autocannons and more armoured tanks in general outperform Leopards by wide margin in these environments. A lone Leopard is expected to lose in most scenarios, thus players should focus on supporting their allies. Let them take a shot, and as soon as you see the enemy tank return fire, lunge forward and send the enemy back to the garage.